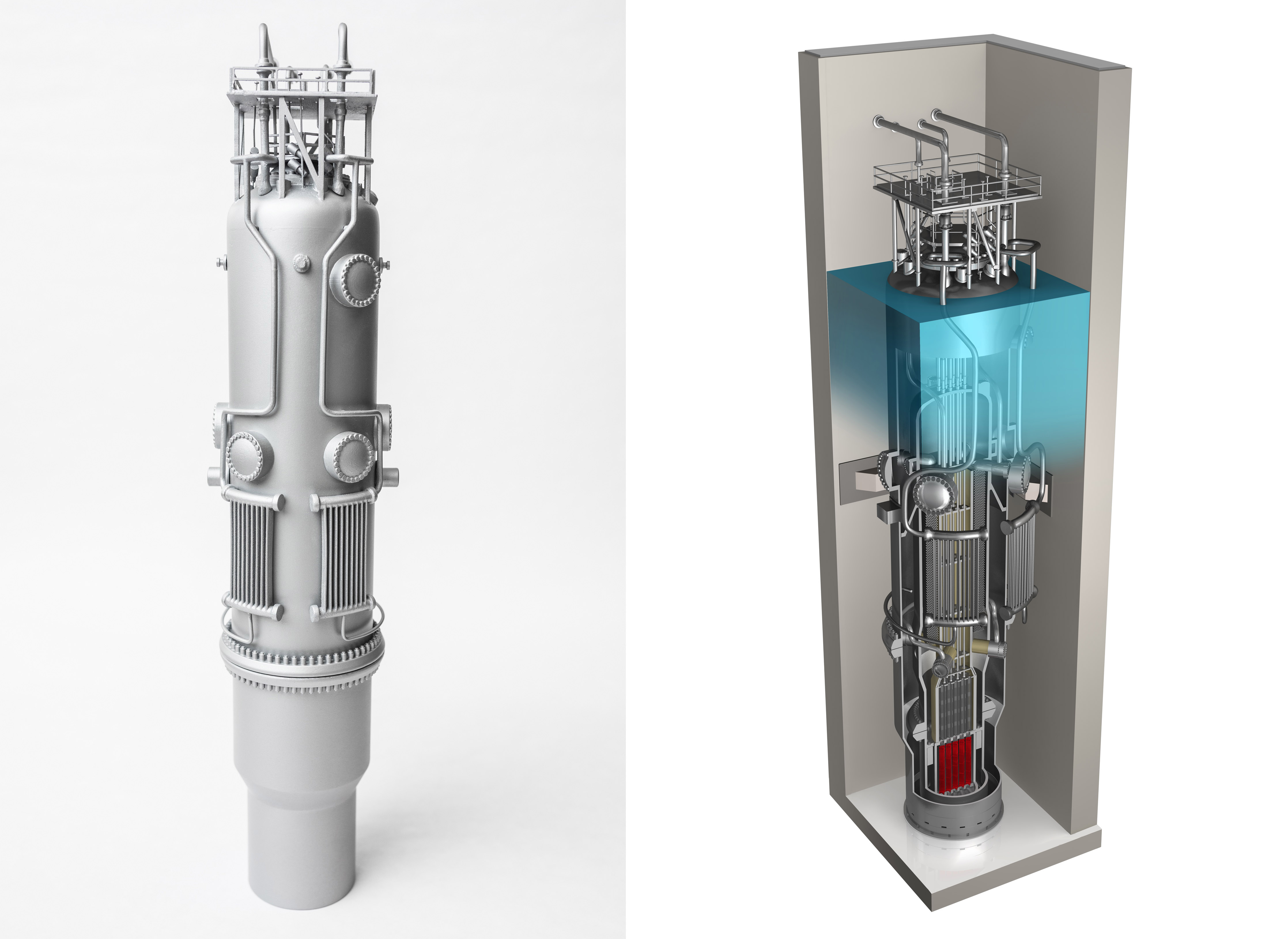 An exterior and cross-sectional illustration of the NuScale Power Module. The small modular reactors are in development and are scheduled to go online in 2029 in Idaho. (Courtesy of NuScale)

It could be the next big thing in power plants.

An Oregon company wants to provide a quick, flexible way to power the region by building modular nuclear units that can be built in a factory and then transported to the power-plant site for final assembly.

Not only would these new units be carbon-free — although not likely controversy-free — but they’re also less expensive to build than traditional nuclear power plants.

Each modular unit would be a mini-reactor capable of generating 50 to 300 megawatts of energy. (One hundred megawatts could power 120,000 houses.) Small modular reactors are supposed to be designed so extra modules can be added as needed, with 12 modules being the theoretical maximum. This concept is supposed to lead to lower costs, faster construction times and more flexibility in tailoring a reactor complex to its customers’ needs.

The nation’s first small modular reactors will likely show up in the Pacific Northwest, possibly in Idaho and Central Washington’s Grant County, with a target online date of roughly 2030.

Some U.S. and world leaders are pushing this new sort of nuclear reactor as a carbon-emissions-free measure to combat climate change.

The front runner in setting up a small modular reactor in the United States is NuScale Power of Corvallis, Oregon.

But its prominence has brought extra scrutiny. Does NuScale’s design create more radioactive waste than a conventional reactor?

In August 2020, NuScale became the first, and so far only, small modular reactor developer to receive approval for its 60-megawatt design by the Nuclear Regulatory Commission. The company plans to submit an improved follow-up version of that design to the commission this December. These design changes include having the proposed reactors produce 77 megawatts each. By comparison, the Columbia Generating Station reactor north of Richland generates 1,200 megawatts.

There are roughly two dozen small modular reactor designs worldwide, about half of which originate in the United States. So far, the world has two functioning 150-megawatt reactors, both on a barge in the Russian Arctic Ocean port of Pevek. China expects to have one up and running by 2026. NuScale also hopes to deliver six small modular reactors to Romania by 2028.

NuScale has partnered with the Utah Associated Municipal Power Systems (UAMPS) — a collection of 36 public utilities in Utah, Arizona, California, Idaho, Nevada, New Mexico and Wyoming — to build a six-reactor complex at the Idaho National Laboratory site next to Idaho Falls by 2030. Each reactor — whose core would be about 10 feet shorter than the Columbia Generating Station’s — would produce 77 megawatts for the complex’s total of 462 megawatts.

UAMPS’ customer base is too small to justify building a conventional 1,000-megawatt-plus reactor, said spokesman LaVarr Webb. Adding small modular reactors as needed fits UAMPS’ idea of expanding when demand for nuclear energy grows, he said. UAMPS is also trying to dramatically cut its carbon footprint, leading to this venture being dubbed the “Carbon-Free Power Project.”

Originally, the completion date was 2027; current plans are to install the first reactor in 2029 with the rest online by 2030. Construction is supposed to begin in 2026. Meanwhile, the original cost estimate climbed from $4.2 billion to $6.1 billion. Eight of the 36 utilities also decided to drop out of the project, Webb said.

“It is not as drastic as it sounds,” Webb said of the changes. He said some utilities dropped out because they did not foresee using the Idaho complex’s electricity when 2030 rolls around. And the increased costs and delays come from the construction plans becoming more detailed, according to NuScale representatives and Chuck Allen, spokesperson for the Grant County Public Utility District.

“This has been a very slow-developing industry,” said Chuck Johnson, program director of the Boston-based International Physicians for the Prevention of Nuclear War. He followed NuScale over the past decade for the Oregon chapter of the nuclear watchdog Physicians for Social Responsibility.

Meanwhile, the Grant County utility district has been seriously looking at developing small modular reactors with either NuScale or X-energy, a Rockville, Maryland-based company also in the modular reactor field. The  Nuclear Regulatory Commission has yet to approve X-energy’s design.

The Grant County utility district’s representatives looked both at sites within the county and at the never-completed Washington Public Power Supply System reactor site next to the Columbia Generating Station within the Hanford nuclear reservation. Energy Northwest’s Columbia Generating Station, formerly the Washington Public Power Supply System before a 1980s bond default, stopped construction of two extra WPPSS reactors at Hanford. The infrastructure remains for something to be built alongside the two half-built reactors.

Despite looking at the old Energy Northwest (WPPSS) reactor site, Grant County utilities officials are leaning toward locating the project within the county at a site yet to be selected. Economics, proximity to customers and access to transmission lines factored into the Public Utility District’s decision to put the site within the county, Allen said.

X-energy and Bellevue-based TerraPower, which plans to build a new type of nuclear reactor in Wyoming, were awarded a combined $3.2 billion in federal money in 2020 to help develop their projects with goals of getting online by 2027. However, both basic designs still need NRC approval. The $3.2 billion depends on Congress appropriating the money in annual chunks.

Meanwhile, a Stanford University study published in May raised questions about contamination from used nuclear fuel from those same reactors.

It looked at NuScale’s designs, as well as designs from two other companies submitted to the NRC. X-energy’s was not among them. The study picked NuScale’s design because it was the furthest along in the NRC’s reviews, said one of the study’s authors, Lindsay Krall, a former Stanford graduate fellow who now works with a nuclear fuel management company in Sweden.

The Stanford study concluded that NuScale’s and the other two designs would produce greater volumes of radioactive wastes than conventional reactors, and that the used reactor fuel would be roughly 50% more radioactive.

In an interview, Krall also said the heightened radioactivity increases the chance that some of the decaying wastes in long-term storage will regain radioactivity, potentially achieving a “critical” condition. A criticality is an uncontrolled burst of radiation caused by substances with certain shapes and at certain levels of radioactivity coming close enough to spark that burst.

Johnson, of the anti-nuclear war physicians’ group, added that storing radioactive used fuel is a problem facing the entire nuclear industry, including small modular reactors. He also noted that NuScale has received federal aid to get the Idaho project online, arguing that is a sign of financial weakness. He argued that NuScale needs a large number of customers to financially break even, saying only UAMPS and Romania have surfaced as customers. He also argued that spreading small modular reactors to small nations will increase the availability of nuclear material to be stolen and used in atomic and “dirty” bombs.

NuScale disagrees with the Stanford study’s conclusions. In an email to Crosscut, it argued that the company’s design uses conventional nuclear fuel used in typical reactors. “The [Stanford] paper uses outdated design information for the energy capacity of the NuScale fuel design and wrong assumptions for the material used in the reactor reflector, and on burn-up of the fuel,“ a NuScale email said.

The email said a small modular reactor’s radioactive wastes are not worse than those produced by conventional reactors. “These inputs are publicly available to the paper’s authors and their omission undermines the credibility of the paper and its conclusions,” NuScale’s email said.

In a public letter this summer responding to NuScale’s accusations, Krall and the study’s other authors — Rod Ewing, a Stanford professor of nuclear security, and Allison Macfarlane, former Nuclear Regulatory Commission chairwoman — wrote that the NuScale design, approved by the NRC in 2020, was all that was publicly available at the NRC when they did their analysis. The fuel burn-up figures were redacted, they wrote. They stand by the conclusions of their study based on the 2020 NRC-approved design. The most recent version of NuScale’s design changes was not available when the three obtained their information from the NRC.

No grant money is allocated for a follow-up study, Krall said.

NuScale and its original reactor design are the brainchildren of Jose Reyes, then-head of Oregon State University’s department of nuclear engineering and health physics. He co-founded NuScale in 2007 and is now its chief technology officer.

NuScale representatives predicted the company would need $200 million through 2024 to continue developing its small modular reactor. It currently has a war chest of $351 million, according to figures released in late August. In April, NuScale acquired $341 million when Spring Valley Acquisition Corp., a publicly traded special-purpose acquisition company based in the Cayman Islands, merged with NuScale. A special-purpose acquisition company is a publicly traded shell company. 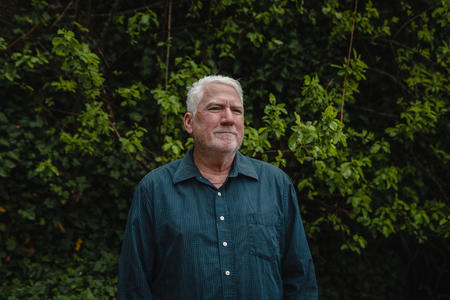 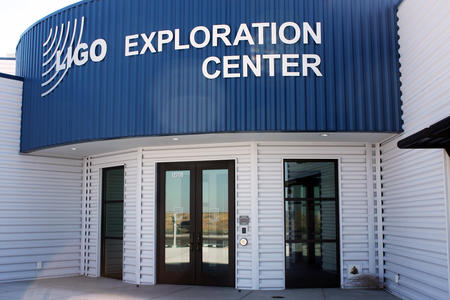 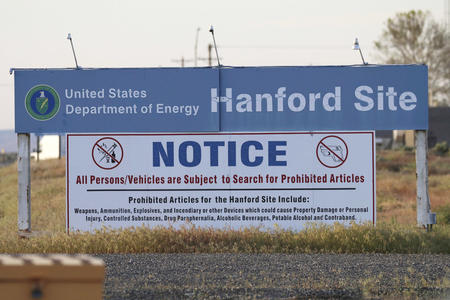