Uber Eats, DoorDash and similar apps eat into restaurants’ already-thin profits. Eating local should be worth a few extra steps. 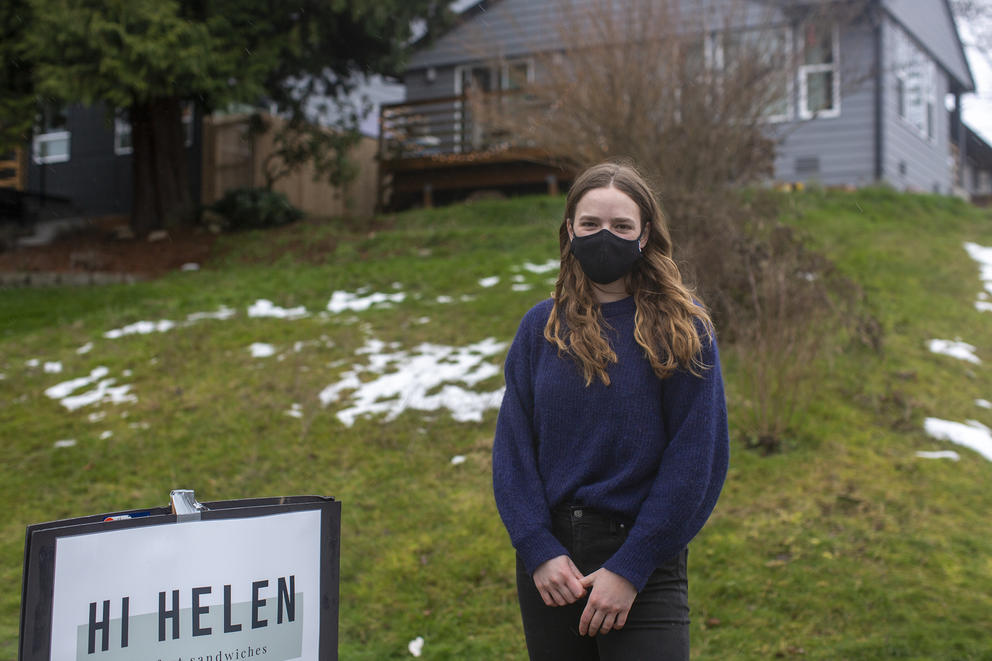 Hi Helen owner Sarah Decelle operates a pop-up in West Seattle, where customers put in orders in advance and then pull up to a street corner to retrieve to-go orders of breakfast sandwiches. (Shaminder Dulai/Crosscut)

If you want to help Seattle restaurants emerge from the pandemic, treat food delivery apps like fire axes behind glass: Open only in case of emergency.

That’s not the message you heard during the Super Bowl, when Uber Eats spent millions on a Wayne’s World-themed commercial that encouraged you to “eat local.” You would also be defying DoorDash, which dropped top dollar on an ad in which Big Bird learned about the ostensible virtues of ordering delivery “from the neighborhood."

Delivery apps can do as much image laundering as they want, but they can’t change the calculus: When you buy directly from a restaurant, it gets 100% of your money (minus a small percentage for payment processing). When you buy food through a delivery app, on the other hand, the restaurant gets roughly 85% — and it gets that much only because Seattle and Washington state have capped delivery commissions at 15% until full dining returns. When all of this is over, many delivery apps will likely revert to charging restaurants as much as 30% per order.

Let’s come back to the numbers in a bit, though, because this issue is about more than just dollars and cents; it’s about saving the soul of our neighborhoods.

I live within walking distance of a small Laotian eatery on Madison Street called Taurus Ox. I go there not just because it makes the best cheeseburger in the city, but because I want to prove that a tucked-away Seattle restaurant can thrive on neighborhood love during a pandemic. After all, if we want a “15-minute city,” where everyone is within walking distance of basic services and eateries, we have to support what’s near us.

Jenessa Sneva, one of three chefs behind Taurus Ox, told me that the customer ordering directly through the restaurant’s website “has been our life saver.”

“It’s overall made orders more accurate, streamlined and efficient without cutting into our sales,” she added.

Taurus Ox still offers delivery through a partnership that its payment processor, Square, has with certain apps. But Sneva says some customers still make the same easily avoidable mistake I made the first time I got takeout: They use an app instead of ordering directly from the restaurant.

“For God’s sake, if you are planning to pick up in person anyway, do not order through these apps,” Sneva urged. “We still have to cough up 15% of our sales from those customer pickup orders, with literally zero service provided.”

Yes, you read that right: If you simply go to a restaurant’s website or — sorry, fellow millennials — pick up the phone and call, you can give it 15% more than it would get otherwise. No app is convenient enough to justify siphoning that much money away from Seattle and shipping it off to Silicon Valley instead. 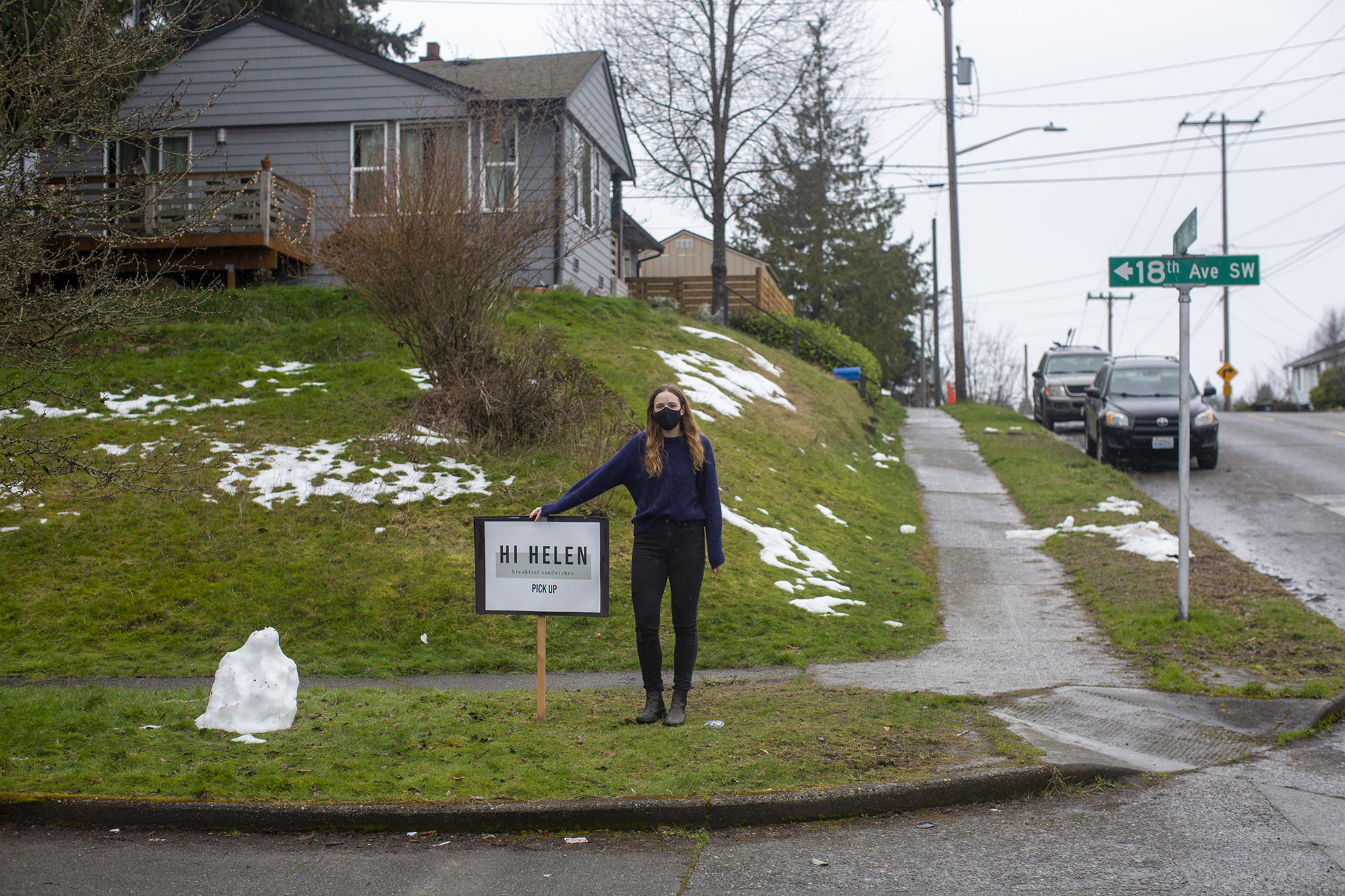 Soon, Decelle is moving Hi Helen to a commissary in SODO. (Shaminder Dulai/Crosscut)

Soon, Decelle is moving Hi Helen to a commissary in SODO. (Shaminder Dulai/Crosscut)

How much money are Seattleites funneling through delivery apps? There’s no surefire way to calculate the exact figure, but we do know that we spend a jaw-dropping dollar amount at restaurants. One 2019 study, sourced from federal data, found that we spend $2,174 per year on “food away from home” — the highest in the country. Another study that same year suggested we spend the most on takeout specifically. So we are likely contributing more than our fair share to the multibillion-dollar delivery app market that’s been ballooning during the pandemic.

For many, delivery can be an important lifeline, especially now. You might be older, have an underlying health condition, as I do, or face accessibility issues that have only been exacerbated by COVID-19.

“I think more people would be out and about walking up and down getting things if it weren’t for the pandemic,” Dennis Comer, program manager at the Central Area Collaborative nonprofit, told me.

That makes it all the more important for those who can break up with their delivery apps to do so, which doesn’t necessarily mean venturing indoors. Many restaurants have parking spots for takeout and others have windows that open onto the curb. You can save money doing this, too: The Central Area Collaborative encourages people to patronize the Central District by offering discounts on gift certificates to be used at businesses like Simply Soulful.

“Direct point of sale, if you’re a person who tips, allows you to know that [your money] is going directly into the business’ pocket,” Comer said. “You know that’s one less thing they have to worry about.”

The restaurant industry already operates on thin margins. Restaurants typically spend about 30% on food costs and another 30% or so on labor costs. Add the 15% to 30% bite that delivery apps take, and many would earn almost nothing on these orders except in large volumes. That means individual effort really does make a difference for a restaurant’s bottom line — and that can feel good.

The most rewarding food experience I have had in the last year was ordering a pork roll breakfast sandwich from the West Seattle pop-up Hi Helen. I had to set an alarm for the exact time orders opened, frantically make my selection in the middle of a work day and trek out to a random street corner in Delridge the following Tuesday — a week’s worth of work for one glorious breakfast. On the morning of the pickup, I sat in my car, feeling illicit, as if I were waiting for contraband, when owner Sarah Decelle appeared with a bag containing a Taylor ham, egg and cheese that transported me to New Jersey.  The whole transaction was personal, direct and delicious — and, Decelle said, that’s what her customers crave just as much as her food. It’s the same feeling she gets when she patronizes her favorite eateries.

“We love to see who we are supporting and the success we help create,” she told me. “You don’t get that from the delivery companies.”

Opening a brick-and-mortar store is still on Decelle’s to-do list, but she’s not planning on offering delivery “primarily from a quality of food standpoint, but the added cost certainly factors in,” she told me.

The expense of delivering food to your door isn’t just borne by restaurants, either; it is also carried by gig-economy drivers who aren’t being paid living wages and who are receiving hazard pay of $2.50 an order during the pandemic only because of a Seattle mandate. Even then, many delivery app companies are simply passing that cost to the customer in the form of a fee instead of fronting it themselves. That’s because the entire business model is unsustainable.

Most of the apps aren’t in the black so they’re operating at a loss as they desperately bid for market share, all the while eating away at restaurants’ margins and spending huge amounts on advertising to convince you they’re actually good for the small guy. Ordering delivery (and tipping well) can help gig-economy workers in the short-term, but in the long-term, a lack of in-person business closes restaurants en masse, eliminating jobs and devastating neighborhood main streets. The economics of it are frankly nauseating — and yet we still swallow the guilt of ordering delivery more often than we should.

“We all crave convenience and ease,” Laura Clise, Seattle-based founder of the small business directory Intentionalist, told me. “It has become a part of our culture. But it’s that same culture that has led us to a world where there’s ever-widening income inequality, and in which we increasingly struggle to bridge our differences.”

Clise, who partnered with Comer on the Central Area Collaborative’s gift certificate program, is worried about a Seattle where restaurants have been reduced to “numbers and words on a screen.” But that future is not inevitable. Everyone can do something small to prevent it. For me, that means walking to Squirrel Chops for a toasted sandwich or heading over to Alexandra’s Macarons for a croissant. It means getting over my awkwardness to say “hi” to a human and make some small talk about the weather. Saving Seattle’s restaurants from delivery apps is worth a few extra steps.