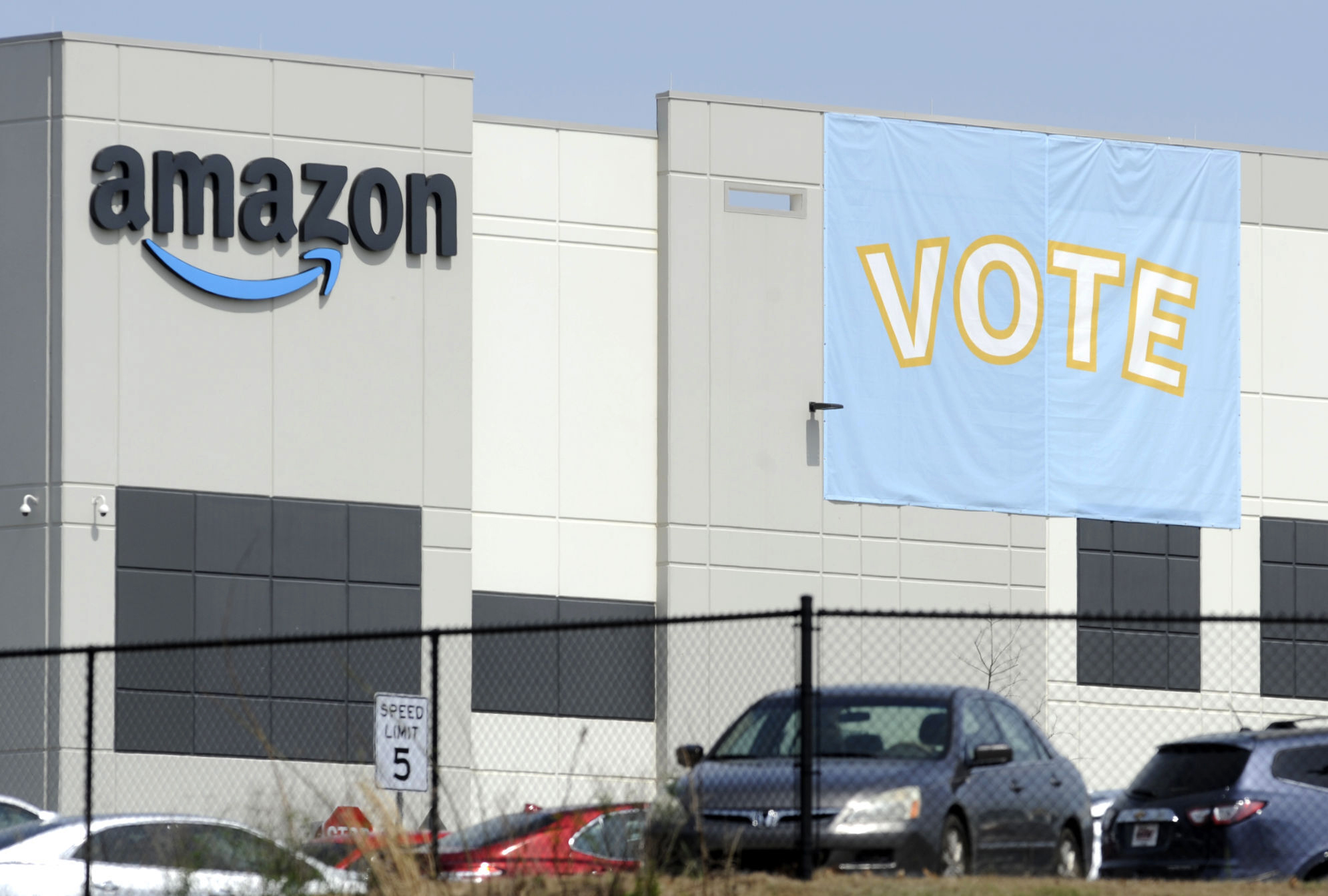 FILE - In this March 30, 2021 file photo, a banner encouraging workers to vote in labor balloting is shown at an Amazon warehouse in Bessemer, Ala. Despite the strongest public support and the most sympathetic president in years, the American labor movement just suffered a stinging defeat. Amazon warehouse workers in Bessemer, overwhelmingly voted against joining the Retail, Wholesale and Department Store Union in much-anticipated election results announced Friday, April 9. (AP Photo/Jay Reeves, File)

Last week, the long-awaited and much-hyped Amazon warehouse union vote in Bessemer, Alabama, drew to a close. Workers who fought for a union lost by a wide margin. According to the preliminary tally, just over half of 5,876 eligible workers cast valid ballots. Only 738 voted to unionize. More than twice that many — 1,798 — voted against. A total of 505 ballots were challenged, but even if all those were actually yes votes, the union drive was roundly defeated.

Since the news broke, media and social media have buzzed with commentary on the results, a muddled brew of emotional reaction, analysis and propaganda. It’s all very confusing. So here’s a brief guide on how to think, and how not to think, about the Bessemer vote.

It’s always tempting to reinterpret defeat as victory. It’s true that the courage of the pro-union Bessemer workers was inspiring, and the campaign did draw attention to Amazon’s abuses. But Amazon, the conditions in its warehouses and its opposition to unions were already subject to national and international scrutiny. And seeing the efforts of those courageous workers crushed by a resounding “no” vote from their co-workers is demoralizing, not inspiring.

There’s no sugarcoating that this vote is a setback for the labor movement. If I were an Amazon warehouse worker, even if I hated my job and believed in building collective power, I’d think twice about signing a union card right now. If this is winning, I’d hate to see what losing looks like. Failing to acknowledge failure is a sure way to keep failing — much better to take off the rose-tinted glasses and analyze what went wrong.

This is not entirely wrong. Amazon did pull out all the stops, using tried-and-true union-busting tactics like papering the workplace with anti-union propaganda and pulling workers into mandatory “captive audience” meetings. Amazon also tried creative new tactics, like getting the county to change the timing of traffic lights outside the warehouse to frustrate organizers’ efforts to talk to workers in their cars. Some of Amazon’ actions may have been illegal. But all that was entirely predictable. It’s easy to blame Amazon for the defeat, but that leaves the boss with all the power. If Amazon is an unbeatable foe, why even try?

Bad take #3: Maybe working for Amazon isn’t so bad after all.

I haven’t heard this argument from progressive commentators, obviously. But this is what Amazon would have us conclude from the vote.

In fact, working in an Amazon warehouse is still dangerous, stressful and dehumanizing.

At the same time, it’s worth dwelling on the spoonful of truth in this take. Alabama’s minimum wage is all of $7.25 an hour. Amazon warehouse workers in Bessemer start at more than double that — $15.30 — with some medical benefits to boot. Other entry-level jobs on offer likely pay less, without being much more fun or fulfilling. In a hollowed-out industrial town whose population has been declining since the 1970s, a new Amazon facility employing thousands was a catch. Workers who have seen or heard stories about factories shutting down are justifiably scared that Amazon could also leave. All that makes fighting for a union against intense company opposition a tough sell. It’s fine to reject the notion that Amazon is actually a pretty good employer, but we can’t ignore the realities that make it resonate.

So much for how not to think about the Bessemer defeat. How should we think about it? What lessons should we draw? Here are two lines of argument worth listening to.

Good take #1: Unions can win, but organizers have to be smarter.

Despite all the hype, the Bessemer union drive was not a well-run campaign. Don’t take it from me — listen to Jane McAlevey, probably the best union organizer in the country. The Retail, Wholesale and Department Store Union, which helped the Bessemer workers to organize, made serious errors. Possibly the most egregious was wildly underestimating the number of workers at the site and filing for a union election before having built anything close to majority support. In an era of declining union membership, McAlevey has helped hospital workers to build high-participation unions and win major workplace and political victories in right-to-work states, and she has written extensively about what it takes to organize today. It can be done — in some industries, at least — but organizers have to do it right.

The Protecting the Right to Organize (PRO) Act, if it passes the Senate, will make unionizing easier — for example, by overriding right-to-work laws and outlawing the captive meetings mentioned above — but nothing will make it easy. Hopefully workers, organizers and labor unions will learn from the mistakes of the Bessemer campaign and do better next time.

Beyond union-busting tactics and laws that stack the deck against workers, there are historical and structural reasons why traditional union organizing today is a tall order, despite strong and growing popular support for unions. Capital has never been more mobile: Witness Boeing fleeing King County for low-wage, right-to-work South Carolina. At the same time, the rise of precarious, part-time, high-turnover service jobs and the “gig economy” has eroded the stability workers need to build solidarity in the workplace. And the problem goes beyond work: 20th century union victories often relied on strong community support, but many forms of community and civic life, from clubs to churches, have dissolved in the past 50 years.

Faced with such challenges, the labor-left has begun experimenting with new ways of building power and winning victories for workers. Labor unions have turned to the political arena, pouring energy and resources into the Fight for 15 and other campaigns for local and state laws that raise labor standards. Uber and Lyft drivers, restaurant workers and domestic workers have joined unionlike organizations that operate outside the collective-bargaining framework. And organizers have begun experimenting with democratic membership organizations that build power among working and poor people outside the workplace — the group I co-founded, the Transit Riders Union, is one such experiment.

The Bessemer loss doesn’t mean that Amazon workers can’t win a traditional union. But it’s worth considering whether other strategies could work better. An Amazon fulfillment center might seem like the factories of old, but workers are largely isolated from each other and turnover is very high. It’s hard to build relationships on the job, and after work they drive home alone instead of hanging out together at the neighborhood bar. And then there’s the whole automation thing. In 20 or 30 years, will Amazon warehouses still be filled with human beings? Will we all be fighting for a universal basic income instead of better wages and working conditions? That’s not clear.

Here in Seattle, it’s a good time to ask these questions. When it comes to Amazon jobs, we’re very familiar with the high-paid, high-tech variety. But with Seattle’s first Amazon Fresh grocery store opening any day now, and Amazon reportedly scouting for new warehouse locations within city limits, we’re about to become better acquainted with Amazon the low-wage employer. Organizers should get ready to try everything.