Loren Culp will be the Republican candidate for governor, while Democrat Marilyn Strickland was leading the race for an open seat in Congress. 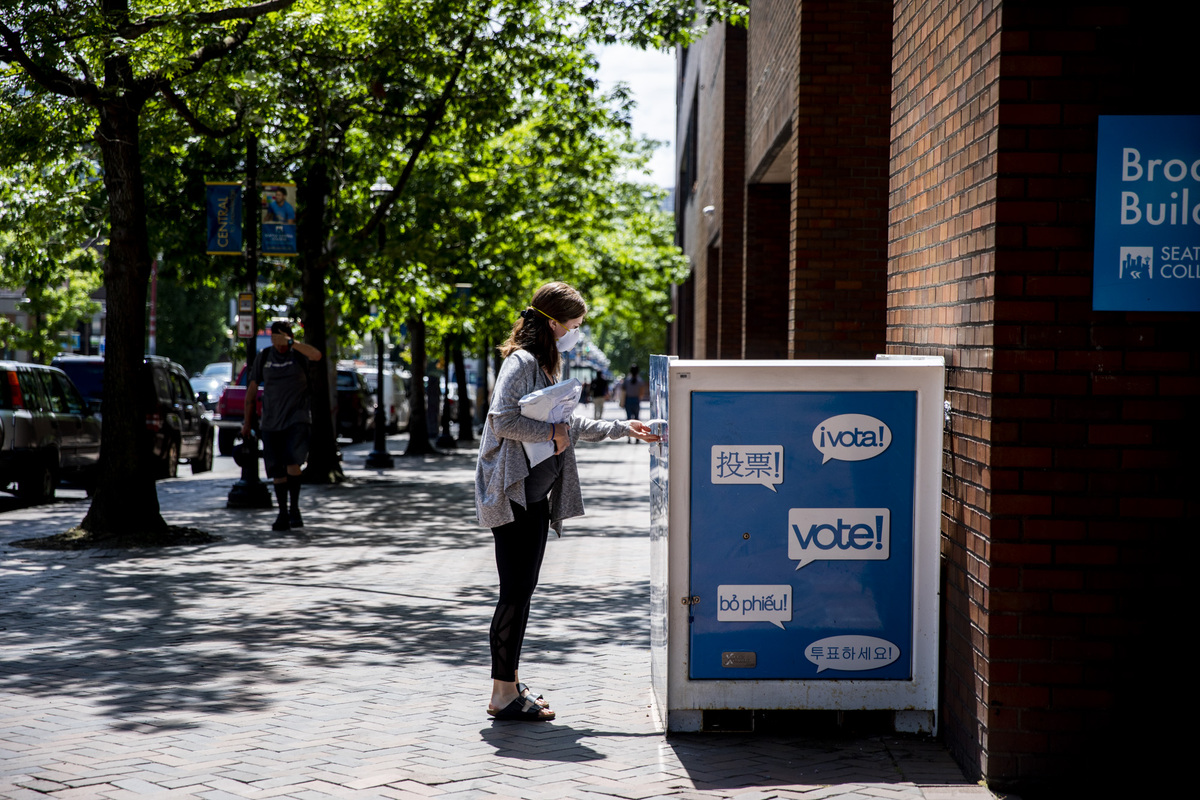 A voter drops off a ballot in Capitol Hill on Aug. 3, 2020. (Dorothy Edwards/Crosscut)

For months, there has been no clear Republican frontrunner in the race for Washington governor.

That changed Tuesday, as results from the state’s top-two primary election began rolling in.

Early returns showed Republican Loren Culp, the police chief in the town of Republic, was leading among the 35 candidates vying to unseat Democratic Gov. Jay Inslee.

Inslee, meanwhile, looked to be in a solid position as he pursues a rare third term in office. The former congressman-turned-governor was winning 52% of the vote Wednesday afternoon, enough to secure his spot on the November ballot.

More ballots in the vote-by-mail election will be counted in the coming days.

Under Washington’s top-two primary system, the two candidates who win the most votes in the primary advance to the general election, regardless of their party affiliation.

As a local police chief, Culp made headlines by saying he wouldn’t enforce Initiative 1639, a gun-control law Washington voters approved in 2018. Culp has also been highly critical of Inslee’s response to the COVID-19 pandemic, saying the governor’s orders shutting down schools and businesses violate people’s rights and make Inslee “like a dictator.”

Inslee was elected as governor in 2012. He ran for president in 2019 with a platform focused on combating climate change. When he dropped out of the presidential race last summer, he announced he would be seeking a third term as Washington's chief executive.

Two other Washington governors have served three terms. The last was Republican Dan Evans, who left the governor's mansion more than 40 years ago.

Only one person has ever represented Washington’s 10th Congressional District, but that’s about to change. Nineteen people entered the race to replace U.S. Rep. Denny Heck, D-Olympia, who is retiring from Congress this year.

Leading the field Tuesday night was former Tacoma Mayor Marilyn Strickland, who until recently was president and CEO of the Seattle Metropolitan Chamber of Commerce. Strickland was capturing about 22% of Tuesday and Wednesday’s ballot count.

Coming in second in early returns was state Rep. Beth Doglio, D-Olympia, a climate activist who was the founding executive director of Washington Conservation Voters. Doglio, who benefited from significant third-party spending from progressive groups, was winning about 14% of the vote Tuesday evening and Wednesday afternoon.

Not far behind was former state Rep. Kristine Reeves, who was winning about 13% of early votes. Reeves previously served as a staffer to U.S. Sen. Patty Murray and as a state economic development director dealing with defense and military issues.

All three Democratic candidates had mounted expensive campaigns in hopes of advancing to the November ballot.

Many ballots remain to be counted, so it’s possible either Reeves or Doglio could still advance to the November election. Doglio led Reeves by about 850 votes on Wednesday.

If Reeves or Strickland wins in November, either would be the first Black person to represent Washington state in Congress.

Doglio, if elected, would be state’s first openly LGBTQ member of Congress.

The top Republican candidates in the race — Rian Ingram, Nancy Dailey Slotnick and Jackson Maynard — trailed by a significant margin.

Kilmer, who represents the 6th Congressional District, was winning 49% of the vote Wednesday, to Parson’s 12%.

A Republican, Elizabeth Kreiselmaier, appears to be the candidate Kilmer will face in November. Kreiselmaier had captured 26% of the ballots counted as of Wednesday afternoon.

In the state's eight other U.S. House races, incumbents similarly advanced to the November ballot.

Although Heck decided to retire from Congress, he didn’t entirely step away from politics. The Olympia Democrat has spent the past few months campaigning to become Washington’s next lieutenant governor, a job that involves presiding over the state Senate and filling in when the governor is out of state.

In returns Tuesday and Wednesday, Heck was leading the race, garnering about 28% of the vote.

The next best-performing candidate was another Democrat: state Sen. Marko Liias of Lynnwood. Liias was winning about 17% in early returns.

The best-performing Republican candidates were well behind in the early election results. Republican Ann Davison Sattler, a former Seattle City Council candidate who recently switched her party affiliation from Democrat to Republican, was winning about 12% of the vote, while Marty McClendon, a conservative talk show host and real estate broker, was also winning about 11% of the votes counted by Wednesday afternoon.

McClendon previously ran for the same position in 2016, losing in the November election to current Lt. Gov. Cyrus Habib. Habib is leaving office to join the Jesuit religious order, opening up his job.

If the early results in the lieutenant governor race hold, it will be a Democrat vs. Democrat battle in November.

The early results signal the race could get heated: Wyman attracted about 50% of votes in Tuesday and Wednesday’s ballot drops, while Democratic challenger Gael Tarleton, a state lawmaker from Seattle, amassed about 45% of early votes. Both will advance to the general election.

On Wednesday, Pellicciotti was ahead with 54% of votes, while Davidson was winning 46%. Each will appear on the November ballot.

In other statewide races, incumbent Democrats were well in the lead. Attorney General Bob Ferguson, Public Lands Commissioner Hilary Franz, Insurance Commissioner Mike Kreidler and State Auditor Pat McCarthy were all ahead in their primary contests.

As of Wednesday, it looked as if Ferguson would face Matt Larkin in November; Franz would face Sue Kuehl Pederson; Kreidler would face Chirayu Avinash Patel; and McCarthy would face Chris Leyba. All of those challengers are Republicans.

In the nonpartisan race for superintendent of public instruction, incumbent Chris Reykdal was leading, followed by Maia Espinoza. Reykdal is a former Democratic state lawmaker, while Espinoza is a teacher and founder of a nonprofit.

Major legislative races around the state

Leaders of both parties found things to feel good about Tuesday night from the early results in state legislative races.

Democrats were pleased with how their candidates were ahead in competitions for Republican-held state Senate seats, said state party chair Tina Podlodowski.

In Pierce County’s 28th Legislative District, Democrat T’wina Nobles was narrowly leading Republican incumbent Sen. Steve O’Ban of Tacoma in one of the most closely watched contests. Both Nobles, the president and CEO of the Tacoma Urban League, and O’Ban had 50% of the vote as of Wednesday afternoon, with Nobles leading by just 23 votes.

In Pierce County’s 25th Legislative District, Democrat Julie Door was leading with 45% of the vote. Door, the mayor of Puyallup, will likely be followed into the general election by Republican Chris Gildon, a state representative, who had 44% of the early votes cast.

In the 10th Legislative District, in northern Puget Sound, Democrat Helen Price Johnson was leading with 52% of the vote, trailed by Republican Ron Muzzall, who had 48%. Muzall was appointed to the state Senate seat last year, while Price Johnson is an Island County commissioner.

Republicans, meanwhile, think the primary results suggest they could pick up some seats in the state House in November, said Caleb Heimlich, chair of the state Republican party.

In the 19th Legislative District in southwestern Washington, Republican Joel McEntire was ahead of Democratic state Rep. Brian Blake. McEntire was leading with 52%, while Blake had 48%.

Heimlich said the incumbent Democratic senator in that district, Dean Takko of Longview, also appears vulnerable, since Takko received a smaller share of the vote than the two Republicans in the race.

Democrats already control both chambers of Washington’s Legislature, but they are looking to expand their majorities this November.

In one intraparty race that has seen a huge influx of outside spending, Democrat Ingrid Anderson, a nurse, was slightly ahead of incumbent state Sen. Mark Mullet, D-Issaquah. Anderson was winning by about 240 votes in King County's 5th Legislative District.

Some open seats in the Seattle area drew intense interest this cycle.

The retirement of state Rep. Eric Pettigrew, D-Renton, has created an opportunity for a new face in the 37th Legislative District.

In the 37th, which includes much of South Seattle and the Central District, Kirsten Harris-Talley was way ahead Wednesday with 50% of the vote, followed by Chukundi Salisbury with 21%. Both are Democrats.

Tarleton’s decision to run for secretary of state also left her position open in the 36th Legislative District, which includes much of Seattle. In that race, Liz Berry is leading with 50% of the vote to Sarah Reyneveld’s 43%. Both are Democrats. Reyneveld is an assistant attorney general, while Berry is the executive director of the Washington State Association for Justice.

In the 43rd District, both incumbents, former House Speaker Frank Chopp and Nicole Macri, were leading in their bids for reelection to the state House. Chopp won 53% of the vote in early ballots and was likely to face Sherae Lascelles of the Seattle People's Party, who had 28%. Macri had 92%.

This story has been updated with results from Wednesday's vote counts.