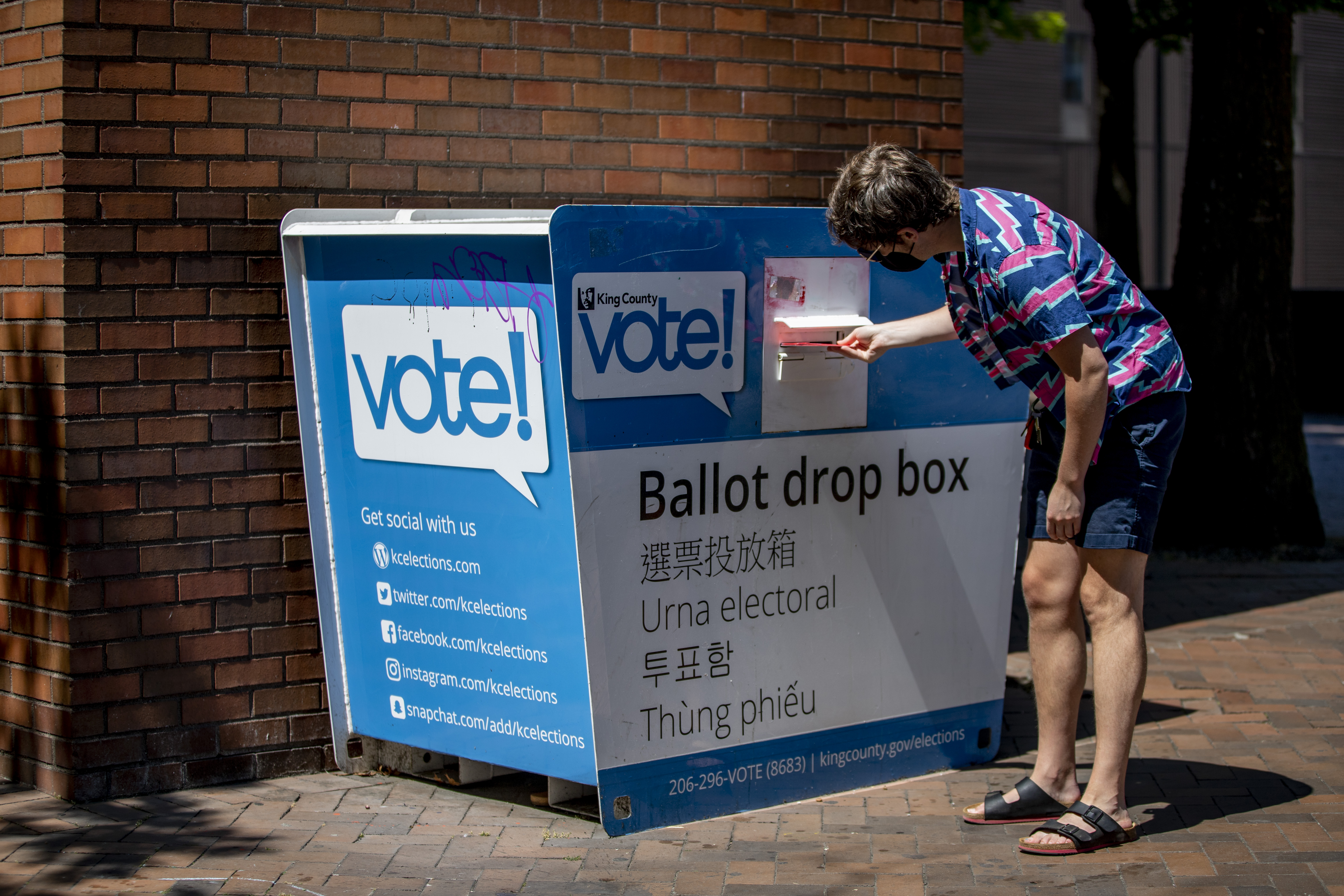 A voter drops off a ballot in Capitol Hill on August 3, 2020. (Dorothy Edwards/Crosscut)

Right now, there are 36 people running for Washington governor. After Tuesday’s primary election, there will be only two.

Think of Washington’s top-two primary as the Hunger Games of state politics: The results will cut down the vast field of candidates, leaving only two finalists standing in each race.

In addition to narrowing the races for nine statewide elected positions, Tuesday’s election will determine who will compete head-to-head for Washington’s 10 seats in the U.S. House of Representatives.

The most crowded of those contests is the race to succeed U.S. Rep. Denny Heck, D-Olympia, who is retiring from Congress.

Most state legislative seats are also on the ballot.

Because Washington uses a top-two primary, the top-two vote-getters in each race will advance to the Nov. 3 general election, regardless of their party preference.

You don’t have to be affiliated with any political party to participate in this primary election. That’s different from the March 10 presidential primary, when voters had to mark their party affiliation and fill out only one party’s ballot.

Voters should have received ballots in the mail by now. Contact your county elections office if you didn’t get one, or aren’t yet registered to vote.

Ballots must be postmarked by Tuesday, Aug. 4, or returned to an election drop box by 8 p.m. Tuesday. State law now allows people to register on Election Day.

Here’s a look at some of the key races to watch on Tuesday.

Who will face Inslee for governor?

Jay Inslee, who is running for a rare third term as governor, seems to have a lock on one of the two spots on the November ballot.

It’s less clear which candidate he will face in November. (Although, it probably won’t be Goodspaceguy, a perennial candidate who is back in 2020).

Five Republicans have had the most active campaigns. They are: Loren Culp, the police chief of the town of Republic; Tim Eyman, the anti-tax activist; Joshua Freed, the former mayor of Bothell; Phil Fortunato, a state senator from Auburn; and Raul Garcia, a Yakima doctor.

Of the Republican candidates, Culp had the most support in a recent Crosscut/Elway Poll.

But with Culp registering at only 14% in that mid-July survey, and 24% saying they were undecided, it’s still anybody’s game on the Republican side, pollster Stuart Elway said last week.

As a local police chief, Culp made headlines by saying he wouldn’t enforce Initiative 1639, a gun-control law Washington voters approved in 2018. Culp has also been highly critical of Inslee’s response to the COVID-19 pandemic, saying the governor’s orders shutting down schools and businesses violate people’s rights and make Inslee “like a dictator.”

Eyman is best known for his 22-year history of sponsoring citizen initiatives — including last fall’s Initiative 976, which promised to cut car-tab fees to $30. Voters approved the measure, but it has yet to take effect due to an ongoing legal challenge.

Eyman is also the subject of a long-running campaign finance lawsuit brought by state Attorney General Bob Ferguson, who has accused Eyman of taking kickbacks and enriching himself with donations meant to support initiative campaigns.

Eyman gained even greater notoriety in 2019 when he took a chair from an Office Depot in Lacey without paying for it. Prosecutors agreed to drop a misdemeanor theft charge if Eyman committed no new crimes and stayed away from the Office Depot for nine months.

Freed, a developer, is the most well-funded of the GOP candidates. He has raised more than $1.5 million (including more than $600,000 of his own money) and has spent $1.3 million so far.

Yet Garcia, the Yakima doctor, has emerged as the favored choice of many of the state’s most prominent Republicans.

In campaign videos and his voter pamphlet statement, Garcia describes how growing up in Fidel Castro’s Cuba made him wary of government overreach and socialism. Garcia, who now owns his own medical practice in Yakima, immigrated to the United States when he was 11.

While Garcia has criticized Inslee’s stay-at-home order as going on too long, he has been less strident in his opposition than Eyman, Freed and Culp. He has also encouraged people to wear masks to help slow the spread of the coronavirus, though he doesn’t agree with Inslee’s order making mask-wearing mandatory,

Fortunato, the state senator from Auburn, has focused much of his campaign around criticizing the governor’s handling of homelessness. When announcing his campaign last year, Fortunato said voters wanted someone to crack down on “these criminal homeless in the street” in Seattle.

Fortunato has also been a staunch supporter of gun rights during his four years in the state Senate.

Heck’s announcement last year that he wouldn’t seek a fifth term in Congress has left his seat open for the taking. The 10th Congressional District, which Heck has represented for the past eight years, includes most of Thurston and Pierce counties, as well as part of Mason County.

Nineteen candidates are running. But the competition on the left side of the political spectrum has been the most fierce, with three Democrats vastly outpacing other candidates in terms of fundraising.

As of mid-July, Beth Doglio, a Democratic state lawmaker from Olympia, had raised the most money, followed closely by former Tacoma Mayor Marilyn Strickland.

Doglio is the founding executive director of Washington Conservation Voters, a statewide environmental group, while Strickland most recently served as president and CEO of the Seattle Metropolitan Chamber of Commerce. Both candidates have reported more than $600,000 in contributions.

Other noteworthy candidates include Joshua Collins, a truck driver who is listed on the ballot as preferring the Essential Workers Party, and Phil Gardner, Heck’s former district director.

The best funded Republicans in the race, Jackson Maynard and Nancy Slotnick, each have raised far less than that.

Outside money could make a difference, too. Two political action committees led by U.S. Rep. Pramila Jayapal, D-Seattle, have been spending big to help elect Doglio. The Medicare for All PAC, which Jayapal chairs, dropped $75,000 on pro-Doglio TV ads, while the Congressional Progressive Caucus PAC, which Jayapal co-chairs, spent $365,000 on mailers and campaign ads supporting her.

Reeves, meanwhile, has benefited from nearly $250,000 in spending by the CHC Bold PAC, the campaign arm of the Congressional Hispanic Caucus.

If Reeves or Strickland wins in November, either would be the first Black person to represent Washington state in Congress. Reeves is Latina and Black, while Strickland is Black and Korean-American.

Either Doglio or Gardner, if elected, would be state’s first openly LGBTQ member of Congress.

Other races to watch

Lt. Gov. Cyrus Habib’s decision to retire from office and become a Jesuit priest has led to 11 people lining up for his job.

Heck, who had already announced his retirement from Congress when Habib decided not to seek reelection, decided to throw his hat in the ring for the statewide position.The lieutenant governor presides over the state Senate, fills in when the governor is out of state and often represents Washington in the area of trade and economic development.

Another prominent Democrat, state Sen. Marko Liias of Lynnwood, also is campaigning for the job, though he trails Heck by a large margin in fundraising.

On the Republican side, Marty McClendon, who ran unsuccessfully for lieutenant governor in 2016, is trying a second time. Former state Rep. Dick Muri, R-Steilacoom, is also in the running, as is Ann Davison Sattler, a former candidate for Seattle City Council who recently switched her party affiliation from Democrat to Republican.

Money is pouring into the race for secretary of state, which oversees the state’s elections. Democrats are hoping state Rep. Gael Tarleton, a Seattle Democrat, can unseat Republican Secretary of State Kim Wyman, who is one of the last GOP statewide officeholders on the West Coast. State Rep. Mike Pellicciotti, D-Federal Way, is similarly looking to oust Republican Treasurer Duane Davidson in November.