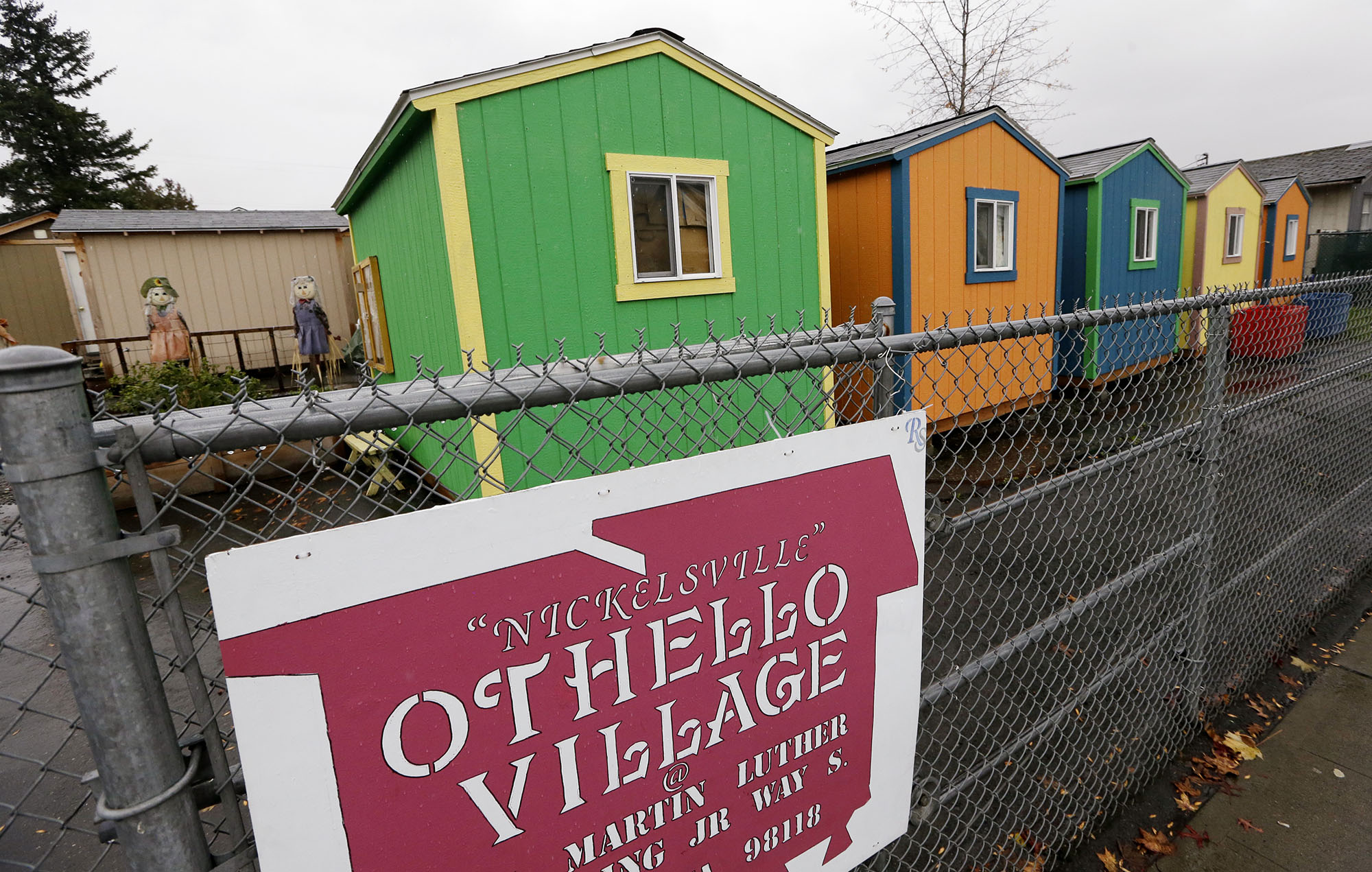 In this Nov. 9, 2017, file photo, tiny houses stand with their backs to the adjacent street in Seattle. (Elaine Thompson/AP)

Homeless service providers and advocates say Mayor Bruce Harrell’s new homelessness dashboard, which launched last week, could help the public better understand the crisis, but it also oversimplifies and underestimates the problem and the potential solutions.

When Harrell announced his One Seattle Homelessness Action Plan he presented the “dashboard” as an effort to increase public transparency around Seattle’s homelessness work.

The new website pulls together the administration’s goals for addressing homelessness along with data about how many units of shelter and affordable housing are in the construction pipeline, the city’s homelessness budget, a snapshot of existing encampments and RVs, and more.

The dashboard shows, for example, that 553 units of new shelter and affordable housing opened this year, 506 units are under construction and 241 are in the permitting process. Harrell has set a goal of adding 700 more units to the housing and shelter pipeline by the end of 2022.

The dashboard also provides a broad breakdown of the city’s $173 million homelessness budget, a number that includes the $118 million in local and federal dollars Seattle gave to the King County Regional Homelessness Authority. It shows that there were 763 tents and 225 RVs in the city in May, along with a map of encampment closures and data about emergency responses in encampments. The dashboard also shows city outreach workers have referred 513 encampment residents to shelters this year, though, as Publicola has reported, fewer than half of people referred to shelters actually spend a night in a shelter bed.

Crosscut spoke with five homeless service providers and advocates to get a sense of what the people closest to this work think of Harrell’s new dashboard.

Chief Seattle Club development director James Lovell said the dashboard could “help demystify the status of efforts that are underway. And that is very important work, so I’m glad these dashboards are available to the general public.”

But Lovell criticized the project for not presenting the full scope of need and misstating the root causes of homelessness among American Indians and Alaskan Natives. The dashboard breaks down the number of people receiving homeless services by race, not the number and proportion of people who need homeless services. “Without this context, it doesn’t actually show how the system is responding to the needs out there,” explained Lovell.

The dashboard draws the important link between racist housing practices such as redlining and the disproportionate number of people of color who experience homelessness. But Lovell wants to see a more accurate explanation of why American Indians and Alaskan Natives are disproportionately homeless.

He pointed to the “hundreds of years of intentional attempts at genocide, land theft, forced assimilation, intentional over-incarceration, theft of children into boarding schools and the child welfare system and the continued trauma that AI/AN people must endure just to exist in a system that has long legislated our demise. These are the traumas that our people have survived and continue to survive, and the resiliency of generations of our people feels overlooked in that paragraph.”

Alison Eisinger, executive director of the Seattle/King County Coalition on Homelessness, said the dashboard doesn’t capture how much housing the city and region need or the deep inequities that result from that mismatch in affordable housing and homelessness.

“People who don’t work in housing and homeless services have a hard time imagining just how inadequate and insufficient and inequitable the systems are,” said Eisinger. “Which is not to say the systems are hopeless. It is to say the problem is if you have 15,000 people who need something and only 200 of that something to provide, you will never make progress.”

Eisinger said she is less interested in critiquing Harrell based on the dashboard he launched last week and more interested in seeing what his administration does to pay for new affordable housing, including helping ensure the Seattle Housing Levy gets renewed when it’s up for a vote in 2023. “What moves the needle in any meaningful measures of homelessness is how well we are helping people get homes,” she said.

Daniel Malone, executive director of the Downtown Emergency Service Center, sees value in the dashboard as a measure of accountability. He also said he’s glad the plan draws the link between providing housing and solving homelessness — after all, you can’t get people off the streets if they don’t have a place to live.

But he worries it underplays the scale of need.

“In fairness, the city isn’t claiming to, nor is expected to, solve it all by itself, so this is Seattle’s part of it,” said Malone. “But it doesn’t go so far as to say, ‘To resolve homelessness, we need it to be at this scale.’ They’ve stated for example a goal of 2,000 shelter beds or housing units. It doesn’t put that in the context of the total need.”

Real Change advocacy director Tiffani McCoy similarly worries the dashboard doesn’t give the public a sense of how much it will cost to address the crisis. “If [Harrell] was truly focused on solving this,” McCoy said, “that dashboard would talk about how we get to functional zero and talk about the massive, massive revenue infusions we need for deeply affordable housing.”

Lisa Daugaard is executive director of the nonprofit Public Defender Association, one of the organizations involved in JustCARE, an outreach and shelter program for high-needs homeless individuals.

She said Harrell’s dashboard is lacking at least one key measure for addressing homelessness: outreach and homeless services staffing. The sector has suffered from significant staff turnover, as workers burn out from their high-stress, low-paid jobs.

She is also concerned that while the dashboard shows new units of shelter and housing coming online, it does not illustrate the loss of existing units. For example, some motels converted into shelter during the pandemic have since closed, as funding runs out. And, Daugaard said, if JustCARE shuts down at the end of the month because of a lack of money, as it is slated to, the system will lose 400 more units of noncongregate shelter.

Daugaard also criticized the dashboard for not distinguishing between types of shelter units. “The dashboard isn't reflecting the importance of matching high barrier, high impact people … with care teams and sheltering facilities that can actually address their issues, behaviors and circumstances,” she explained. “Offering people spaces in shelters that don't work for their situation, where they will be kicked out within days, while sweeping their camps, generates a lot of data points, but doesn't present an actual solution for those individuals.”