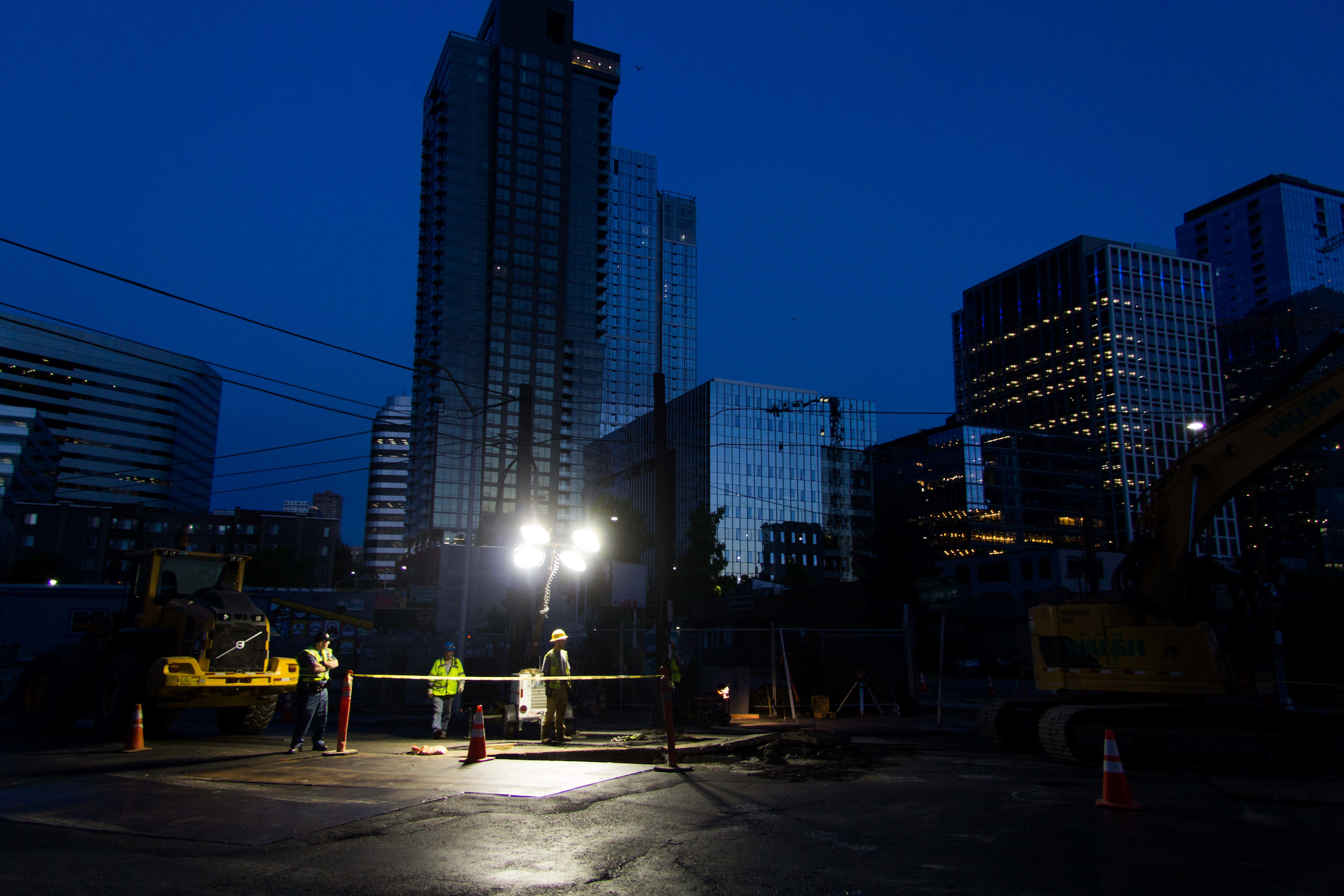 At night, the Downtown, South Lake Union and Denny Triangle areas exude a ghost-town vibe. (All photos by Margo Vansynghel for Crosscut)

On a bright Thursday afternoon near the Amazon Spheres, the sun had risen as high as the tension. Wearing bright orange and yellow vests and hard hats, a group of ironworkers shouted “No Head Tax,” interrupting Councilmember Kshama Sawant’s speech during an event she had planned with her party, Socialist Alternative.

The action was led by Chris McClain, Business Manager for the Iron Workers Local 86 and President of the Seattle Building & Construction Trades Council. A day earlier, Amazon — one of the union’s largest indirect employers — had announced it would pause construction on a downtown tower.

In a statement, Amazon tied its threats to the Seattle City Council’s proposed tax on business with revenues over $20 million a year. The proposed tax, which would raise an estimated $75 million for new housing and homeless services, has been explicitly labeled as an “Amazon tax” by supporters.

“The head tax will jeopardize our jobs,” McClain said. “Hundreds of ironworkers and potentially 1,000 construction workers could lose their jobs. The building trades have not been brought into the conversation. We are not willing to trade our livelihoods to give homes to homeless people.” 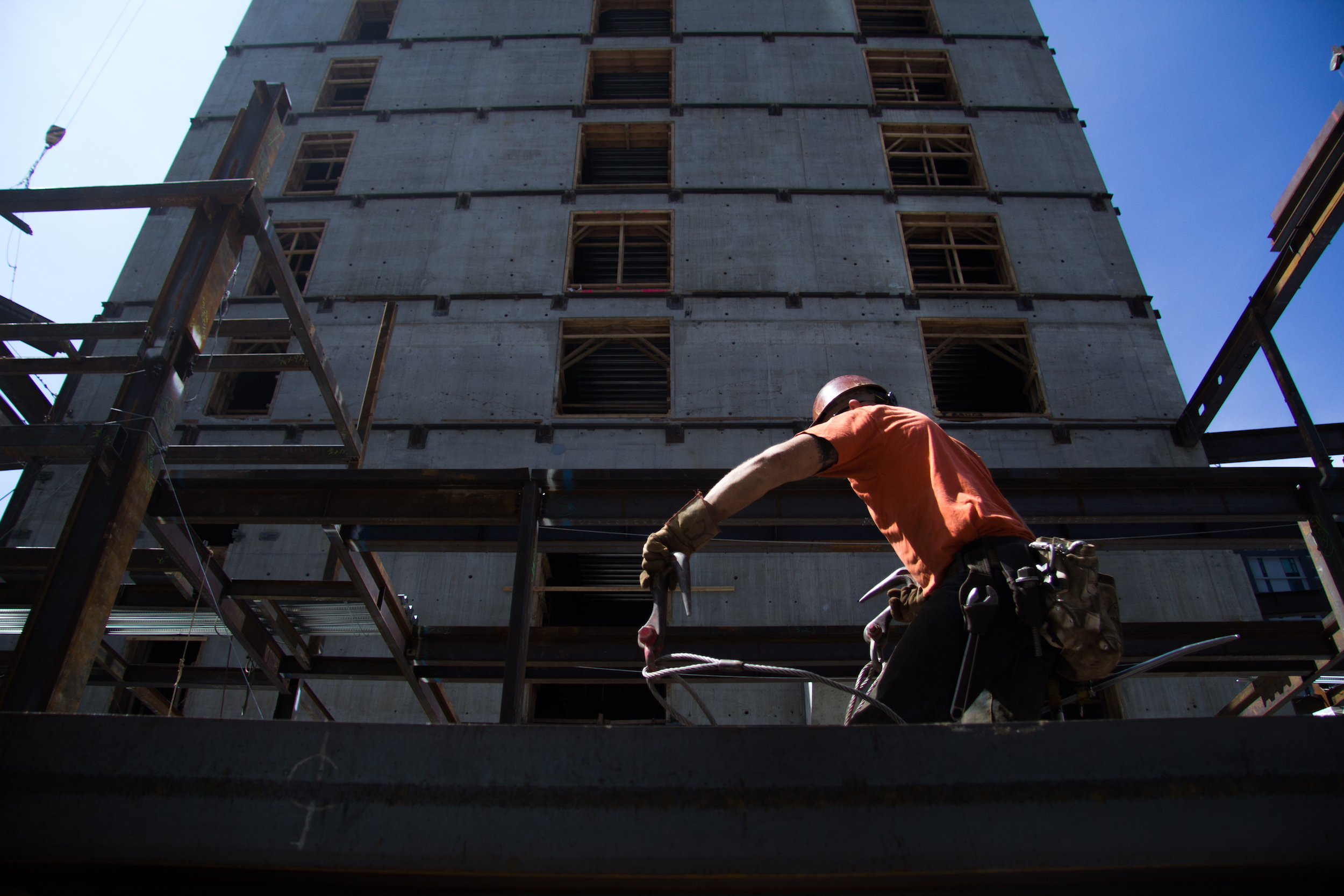 An ironworker walks between the steel bars on a track, connecting them to a crane which will hoist them up to a floor of a new high-rise building downtown.

An ironworker walks between the steel bars on a track, connecting them to a crane which will hoist them up to a floor of a new high-rise building downtown.

That evening, on a fenced-off construction site near a 41-story building, two glaziers install glass panels, and a small speaker pipes ABBA’s pop-disco hit Dancing Queen through the soft dusky air. “That’s my jam,” one of them quips from the forklift when the beat is joined by the keyboard line.

The high-rise, which will comprise 450 residential units when finished, is just one of the buildings under construction on the few blocks between Denny Triangle and South Lake Union. Terry Elliott, a glazier who’s been in the trade of cutting, installing, and removing glass for 19 years, points South: “That building right there got put in, and then another one right there, and two more down the block. All in the last four years.”

Tallying has become a familiar way of grappling with Seattle’s growth. Residents count the 45 construction cranes punctuating the skyline, making Seattle the Crane Capital of the United States for the third year in a row, according to consultant Rider Levett Bucknall’s Crane Index report.

Since 2015, more than 16,700 housing units have been built in Seattle, but 11,643 people in King County alone are unhoused, according to most recent All Home King County statistics. There are 57 projects currently under construction between South Lake Union and South Lander Street.

Many of the over 100,000 people powering the development and growth in Seattle can’t afford to buy property in the city they built. Elliott, who lives in the Rainier Valley, says he’s been looking to buy a house. “I’m still hunting up areas,” he says. “but it’s pretty expensive. I’d have to move to Tacoma to find something at my price point.”

“The cost of living is like New York City here,” says Mohammed Dembele, surrounded by some twenty colleagues on midday break in the windowless “lunch shack,” located on the underground floor of a large downtown development. “Except Seattle is not New York City, yet. I’ve lived here for 18 years. I love the city, but I’m moving out.”

Dembele lives near the University of Washington, which makes him an exception in the lunch shack, and among many of his colleagues across the city. Most construction workers commute from out of town: Marysville, Puyallup, Federal Way, often driving two hours or more a day to get to the job, parking in nearby garages at increasingly expensive rates.

“The majority of us live on the outskirts,” says Casey Goings, seated a couple of chairs away. “And we’re fine with that. We don’t want to live here, it is too crowded, too expensive. People want space. For what I am paying for a house, I’d get a postage stamp in Seattle.”

Outside the shack, Gregory Warren is eating a carefully packed lunch, unbothered by a deafening soundtrack of screeching saws and loud thumps — he has “hearing loss from the army anyway.”

Warren found a job in ironwork straight from the army last August. He’s one of the thousands of people joining the city’s construction workforce in the last year, a 6.6 percent increase compared to 2016 in Seattle alone, according to data from the Employment Security Department of Washington State (ESD-WA).

But even with this workforce, the industry can’t keep up with demand and is scrambling for workers. “There’s a lot of anxiety,” says Sonja Forster, Seattle District Manager for the Associated General Contractors (ACG) of Washington. “Will we be able staff these jobs that we have coming up?”

While the region’s boom exposes the shortage, its roots lie in the 2007-08 financial crisis, which hit the construction industry harder than any other. Over 33 percent of industry jobs disappeared in the Seattle-Bellevue-Everett area, according to ESD-WA. “Many people got out of the trades after the recession. The industry hasn’t really recovered from that exodus,” Forster says. “Some people didn’t come back, and the new people in the labor pool are not yet fully trained up. We’re concerned there’s not enough people in the pipeline.”

Many people in the industry see the most recent crisis as just one undulation of an inherently cyclical business. Right now, it is up. But it could go down anytime. “Construction moves in waves,” says Chris Coville, a labor foreman who’s worked in construction for two decades.

“In a way, we are very high-qualified temp workers,” he says. “If you’re lucky, you work on a job for years, sometimes just for months. Overall, I’d say we prepare mentally for not having a job.”

For as long as it lasts, the boom is good news to many. There’s work, and most say they are paid well. The median hourly wage for a construction laborer in the area is $23.14 per hour, though managers or supervisors make in the high $30s or $40s per hour.

Some are paid less. Jesús, who did not want his last name used, said he had been working as a painter for $16 an hour and now makes $20 working in construction, which he says is not a decent wage for the dangerous work he does. “Many of my colleagues are immigrants who feel like they have no voice.”

His is one of the lesser-heard voices in a debate that reached fever pitch last week, and perhaps also laid bare a deep rift in Seattle 2.0. At the center of it, construction workers find themselves in a strange limbo. They are extremely visible — on nearly every downtown block, in fluorescent yellow and orange — but somehow rarely in conversations about the boom. 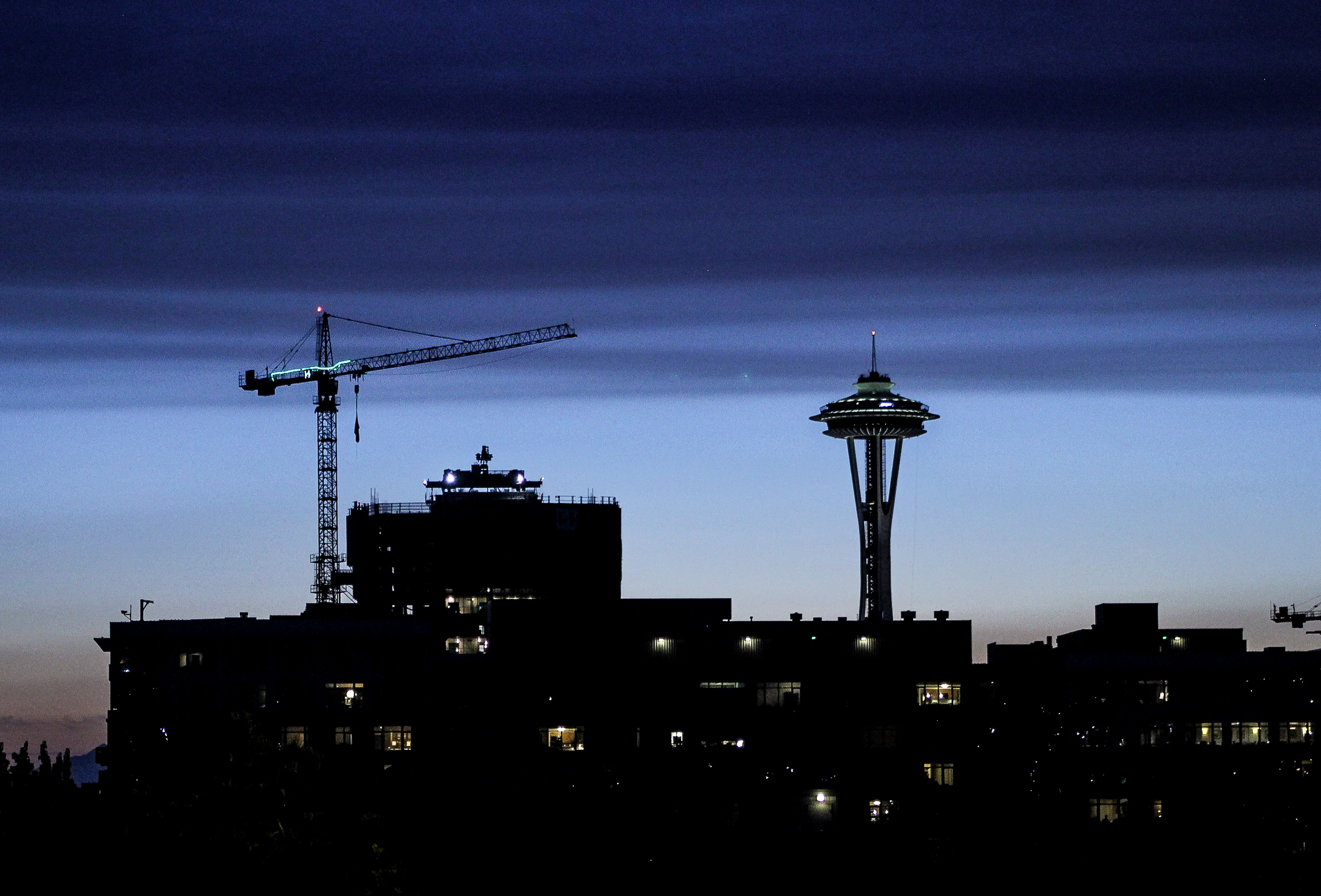 A view of a crane near the Space Needle in Seattle.

A view of a crane near the Space Needle in Seattle.

Their jobs are a pawn in a hyper-charged discussion about a tax aimed to help those on the fringes of a city most workers don’t live in — and couldn’t afford even if they wanted to. They’re making better wages than many other workers, partly thanks to the boom, but always wondering when it will go bust. And in the process, helping a city build over its blue-collar roots.

“Seattle has become a monoculture,” says ironworker Logan Swan, who cites the displacement of communities in Capitol Hill and the Central District, and the “company town” Seattle’s becoming. “I don’t feel welcome here.”

Swan is a member of both the Iron Workers Local 86 as well as Socialist Alternative, with whom he’s campaigning for the head tax.

Many of my colleagues are immigrants who feel like they have no voice.”
— Jesús

“Tensions are running high right now,” he says. “Working people are having to commute longer and longer, spending time away from their families. Working people should be able to afford to live in the city they work in. We make the city run.”

Swan moved here in 2010 from California, working different jobs while the economy was still in a slump. It was hard. “Workers are the ones faced with a cycle of boom and bust,” he says. “When it goes bust, they get their homes foreclosed on, their factories closed, pensions and wages cut, but the businesses get bailed out. And then when it goes boom, people say ‘just be thankful you have a job.’”

Meanwhile, it’s hard to gauge whether a slow-down of the boom will come anytime soon. According to local research firm Dupre + Scott, Seattle is on its way to build more this decade alone than in the last five decades combined, and many big projects are unfinished. All the while, buildings rise higher, and the city’s fault lines deepen. 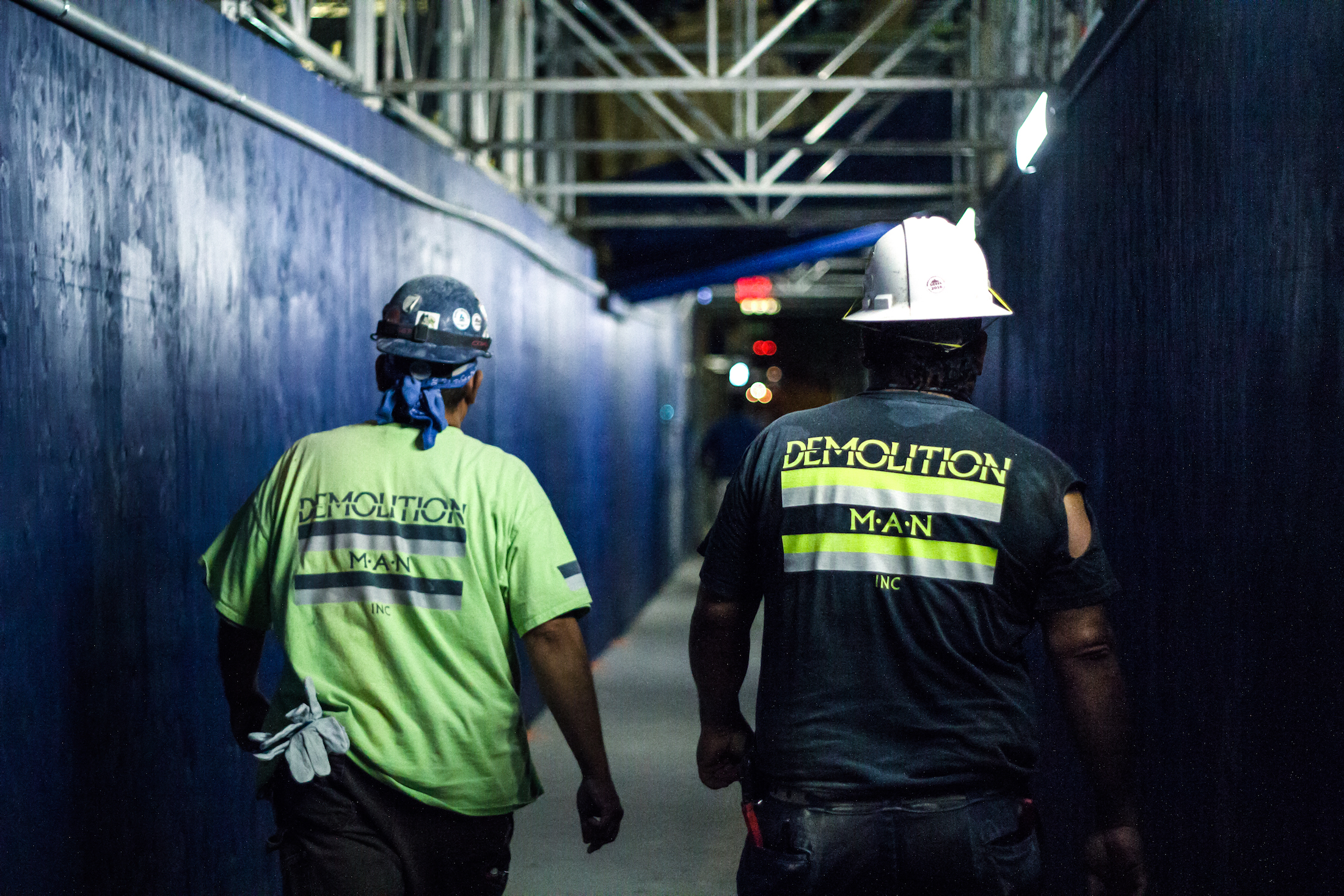