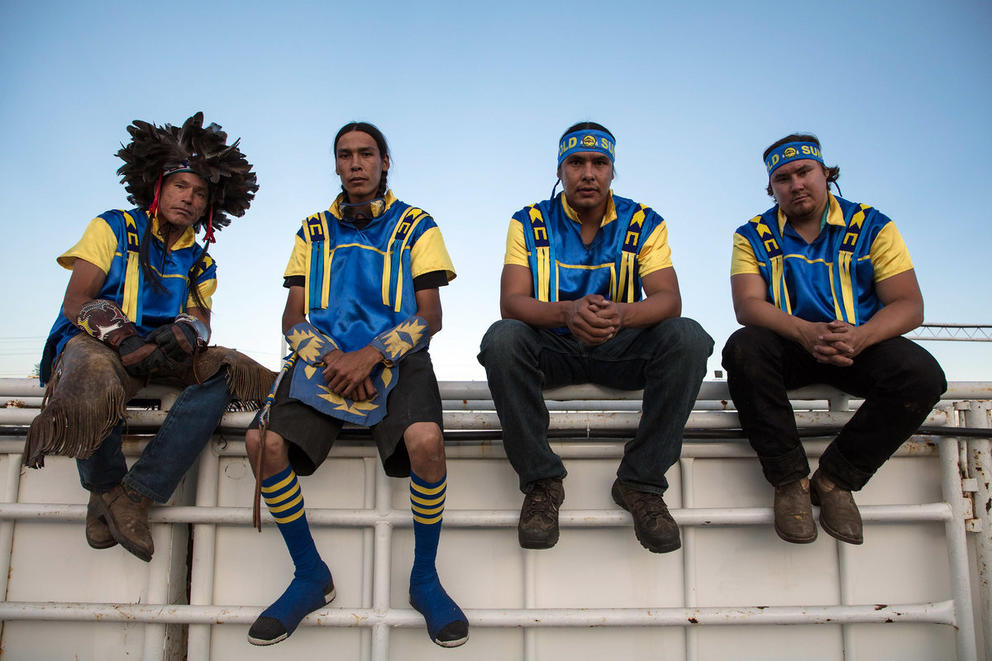 A still from “Fast Horse” by Alexandra Lazarowich, an official selection of the Shorts Program at the 2019 Sundance Film Festival. The shorts are on view at Seattle’s Northwest Film Forum starting this week. (Sundance Institute/Aaron Munson)

If you go: See links embedded above.

Exploring Passages Within the Black Diaspora

The central figure in Courtney Desiree Morris’ 2019 photograph “Colored Swimming Pool” is a woman in a crimson dress who looks over her shoulder — sternly, solemnly — and doesn’t let you go. Much in the same way, Morris can’t let go of her home turf: southwest Louisiana, where she returns time and again to capture a landscape ruined by the petrochemical industry. The photo, from Morris’ series Solastalgia, is just one of the captivating artworks in the Photographic Center Northwest’s winter exhibition, Exploring Passages Within the Black Diaspora. Curated by multidisciplinary artist, writer and University of Washington cultural studies graduate student Berette Macaulay, the exhibit features works by female-identifying photographers from Africa, the Americas and the Caribbean. -M.V.S.

Common wisdom among writers is that  because of the form's unforgiving constraints, short stories are harder to write (and thus a better test of talent) than full-fledged novels. The same just might be true for short films. Judge for yourself at the 2019 Sundance Film Festival Short Film Tour, featuring a selection of short films from last year’s Sundance Film Festival and now on view at Northwest Film Forum. This year’s showcase includes short features, documentary and animated films covering such diverse topics as the Blackfoot bareback horse-racing tradition, a day-walking Black vampire protected from the sun by her melanin, the magic of museums, as well as the homecoming of a Tunisian shepherd’s son. The showcase serves as the perfect occasion for discovering new cinematic talent, and there's another boon: Cinephiles can see seven movies in just 96 minutes. –M.V.S.

This month marks the 10-year anniversary of Seattle dance company Whim W’Him. In January 2010, the longtime Pacific Northwest Ballet dancer and choreographer Olivier Wevers premiered his then new company’s first-ever evening-length show, 3Seasons, which consisted of three dance pieces choreographed by Wevers himself. A decade on, Wevers has continued the three-piece tradition, but has expanded the mix to showcase works by an international slate of choreographers. This time around, Wevers shares the bill with celebrated contemporary dance makers Sidra Bell (master lecturer at the University of the Arts in Philadelphia) and Ihsan Rustem (based in Zurich). All three choreographers are presenting world premieres. In Rustem’s “Of Then and Now,” seven dancers reflect on the past and the future, set to a varied soundtrack that includes Vincenzo Bellini, Johnny Cash, Jefferson Airplane, Libana and Aldous Harding. Bell’s piece, “Behavioral Skins,” is a meditation on life’s symbolical molts; and Wevers’ “Blind Spot” visualizes humanity’s lapses in compassion with the help of an onstage light art installation by Seattle-based design company RSVR. –M.V.S.

A callow man spurns the tender love of an exceptional young woman, destroys his dearest male friend and is condemned to endure a solitary existence mired in regrets. Such is the lot of the title character (and prescient anti-hero) in Alexander Pushkin’s classic 1833 dramatic poem, “Eugene Onegin,” as well as in the heart-wrenching Pyotr Ilyich Tchaikovsky opera based on it, which premiered in 1879 and is onstage now at McCaw Hall. Esteemed for its gorgeous score, potent emotion and compelling arias, the work receives a sumptuous, expertly performed Seattle Opera production, which in (nearly) all respects fulfills an enduring fable of love’s illusions and delusions. A beacon of 19th century Russian literature, Pushkin was a complex figure in several ways. He was the rare person of African heritage born into Russian nobility. His works were bastions of Russian Romanticism, but variegated with bitter ironies. And his untimely death at 37 was the result of a duel over a woman:  an event also central to Eugene Onegin.

In the opening night cast, soprano Marjukka Tepponen and baritone John Moore shone as the lovestruck young Tatanya and the aloof, decadent Onegin, whose reunion, years after their initial meeting, is fraught with passion (and, of course, is doomed). Also excellent are tenor Colin Ainsworth, as Onegin’s unfortunate poet friend Lensky, and David Leigh, whose river-deep bass is perfectly matched to the princely war hero that Tatanya marries. The only off-key performance comes from mezzo-soprano Melody Wilson as Tatyana’s younger sister Olga, who expresses girlish enthusiasm with annoyingly fluttery mannerisms and a surfeit of skipping around. Those missteps mar the opening scene, but fade as the focus shifts and the orchestra swoons and scintillates (under the able baton of Aleksandar Markovic, making his Seattle Opera debut). And the period costumes (designed by Isabella Bywater) and Erhard Rom’s pastel-toned sets (featuring gilded mansions and sweeping landscapes) are pleasures to behold. –M.B.

From Struggle to Survival: Creating Beauty Out of Tragedy

“What would I do / for a smidgeon / of your rebellion María?” asks Washington State Poet Laureate Claudia Castro Luna in the first few, gripping lines of her poem “María Cristina Hanging Chrysalis.” It's from her book Killing Marías, which Castro Luna says deals with “femicide, abuse of girls and women, transnational capital.” The poems within, she says, are a way of “giving a degree of dignity to femicide victims, of writing hope over despair and responding with beauty to the ugliness of the world.” Castro Luna will read from the book as part of “From Struggle to Survival: Creating Beauty Out of Tragedy,” a literary night full of music at the Elliott Bay Book Company. Classical guitarist and composer Hilary Field, poet Lena Khalaf Tuffaha, storyteller Merna Ann Hecht and cellist Michelle Dodson will join Castro Luna in sharing stories of struggle, survival, and above all: beauty and hope. –M.V.S.

If you go: From Struggle to Survival: Creating Beauty Out of Tragedy at Elliott Bay Book Company, Jan. 20 at 7 p.m. (Free)

by / January 14
Article continues below