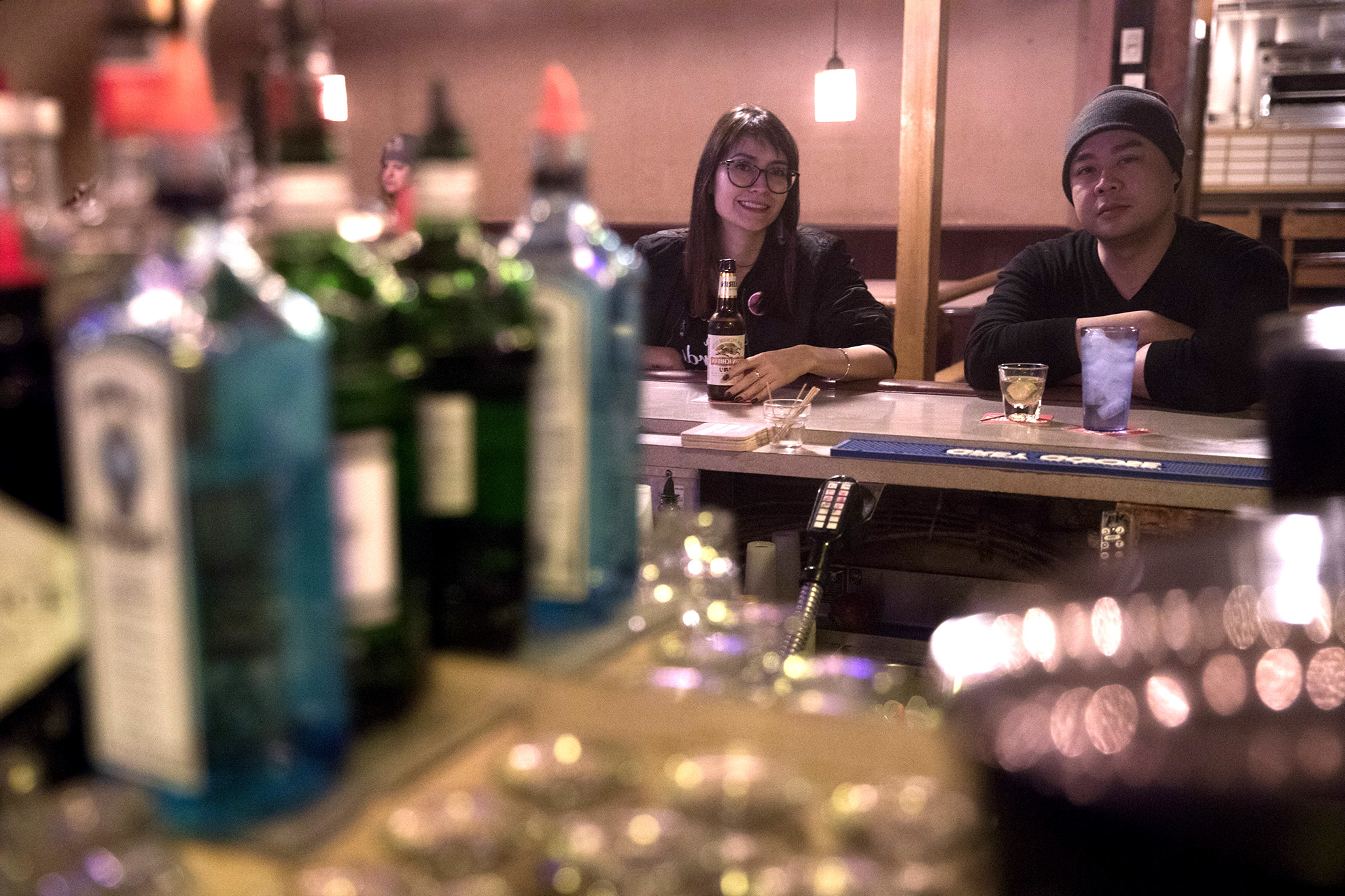 Vanishing Seattle founder Cynthia Brothers and filmmaker Martin Tran sit at the bar at Bush Garden in Seattle’s Chinatown-International District, Jan. 9, 2020. Tran and Brothers are collaborating with local filmmakers to produce a seven-part documentary film series highlighting what still remains in the face of a changing city. (Matt M. McKnight/Crosscut)

The winter sky has barely begun to darken, but on this recent Friday afternoon in Seattle’s Chinatown-International District, the red neon sign on Bush Garden’s bamboo-clad entryway makes a glowing sundown promise: COCKTAILS.

At 4:30 in the afternoon, neither Cynthia Brothers nor Martin Tran, seated on the brown vinyl banquette in the back, feels quite ready for mixed drinks. Tran, a filmmaker and former co-director of the Seattle Asian American Film Festival, sips from a glass of water. Brothers, the originator of the popular “Vanishing Seattle” hashtag and social media account that chronicles Seattle’s soon-to-be-lost or longtime institutions, orders a Kirin beer.

“I love it here,” Tran says. “It’s like our Cheers. Every time you come in, you know everyone.”

Bush Garden is many things: a beloved, decades-old neighborhood watering hole, a (former) tatami-matted Japanese restaurant, a longtime meeting place for activists fighting the neighborhood’s gentrification and, famously, the birthplace of Seattle karaoke.

For Brothers and Tran, it’s also the birthplace of their new project: A seven-part Vanishing Seattle documentary film series made in tandem with local filmmakers.

The short films, each about seven minutes long, document community spaces and neighborhoods facing gentrification and displacement, and iconic local small businesses in danger of disappearing. Bush Garden is in the mix, as well as the Four Seas restaurant and Dynasty Room lounge in the Chinatown-International District, longtime Hardwick & Sons hardware store (the 87-year-old University District fixture due to close), Capitol Hill’s artists and art spaces, and Ballard’s last Scandinavian specialty food shop, which faces an uncertain future after the property that houses the shop was sold.

“The whole spirit from the beginning was: How do we take a deeper dive behind the Vanishing Seattle hashtag and further humanize it?” Brothers says. “How is [displacement] impacting people on an individual human level, their families, their community, their businesses?”

The film series kicks off Jan. 16 with a movie screening at and about Wa Na Wari, the new Central District art and community space, which opened in photographer and filmmaker Inye Wokoma’s ancestral house in spring 2019 as a way to reclaim space in the gentrified Central District.

Like the film focused on Wa Na Wari, most of the documentaries will debut at community screenings. New films will be released at monthly intervals, after which Brothers will distribute them on YouTube and through Vanishing Seattle’s Facebook and Instagram channels. A film made by Louie Gong, founder and CEO of Native retail brand Eighth Generation, will highlight the region’s Coast Salish communities and likely conclude the series.

The project has been three years in the making. Back in 2016, Brothers had already been garnering attention and followers with photos and stories of soon-to-be-demolished Seattle institutions, such as Beacon Hill restaurant Inay’s Asian Pacific Cuisine and Seattle's Old Spaghetti Factory. Since then, she has amassed over 50,000 followers. In late 2016, Brothers had to add Bush Garden to that list when news broke that it would likely be razed to make way for new development.

Brothers immediately rallied offline support to “Save the Bush.” Her path crossed Tran’s when he, along with fellow filmmakers Ellison Shieh and Chris Woon-Chen, was searching for interview subjects for a documentary about Bush Garden and its history (set to be released this spring as part of the series).

With other neighborhoods and communities facing similar development and displacement pressures, they realized there was a trove of stories ripe for telling, and that video would be the best way to capture them.

It soon became clear, too, that Tran and Brothers were not necessarily the ones to tell all those stories. “As community workers, we’re sensitive to people telling us how to do stuff in our own community. So we definitely didn’t want to be those people in other communities,” Tran says. “Not be like culture vultures.”

That’s why all of the local filmmakers have a personal connection to their subject matter. Many grew up in the neighborhoods they filmed in; others have longstanding ties in the community, with the people they interview, or both.

“I was super drawn to this project not only because I’m an artist and I'm connected to many of the folks who are part of the Wa Na Wari community, but also because I’m someone who’s experienced displacement. It’s a personal issue,” says Chimaera, a local multimedia artist, community organizer and educator. Chimaera created the Wa Na Wari documentary with filmmaker devon de Leña, whose father and paternal grandparents used to live in the neighborhood.

“Being displaced [from the Central District] …, and then being invited back to tell that story, is a really powerful thing.” Chimaera says. “Most people do not get that kind of opportunity.”

As de Leña and Chimaera filmed at Wa Na Wari over the summer, recording poetry readings, barbecues and art openings, “full blocks of the Central District were leveled and dug up,” de Leña says. But while their documentary chronicles the Central District’s history of redlining and current gentrification and displacement, their portrait of Wa Na Wari is foremost one of resilience. Of not vanishing.

Brothers acknowledges the Vanishing part of the series’ title doesn’t quite cover its depth: “It’s about flipping a script as well,” she says.

“We want to show hope,” Tran adds. “We didn't want it to just be this depressing series about, ‘Look how crappy everything is.’ There are battles we're losing. We’re definitely profiling spaces that are just gone and kaput, [but] we want to show different modes of things to do if you're threatened.”

What the films in the series show, Brothers says, is not a dichotomy of “old: good, new: bad.” They also show the current displacement in the context of the city’s history of colonization, segregation and redlining. Brothers also points to the example of Bjørn Ruud, owner of Scandinavian Specialties. In the film, Ruud says the boom has brought in new, affluent customers who buy his “kind of expensive goat cheese.” But he’s still facing the prospect of having to leave his longtime neighborhood.

Rather than merely decrying the losses, Brothers says, the films in the series show that what these places mean to people goes “beyond the four walls.” It’s what people really find at Hardwick & Sons, beyond the hardware. The intergenerational connections people make at Bush Garden. Feeling at home again in a profoundly changed neighborhood, like the Central District.

Sometimes, stories slipped through the filmmakers’ fingers. “There were definitely times when we … wanted to profile something, but it was gone by the time we could find a filmmaker,” Tran says. The Central District’s Red Apple, the Highway 99 Blues Club and Kusak Cut Glass are some that got away. “One of the tough things about this project is that things move so quickly,” Tran says.

The bar will likely move to a nearby building, a soon-to-be-built, low-income housing project named after longtime Bush Garden regular and community activist “Uncle” Bob Santos. For now, it is unclear when Bush Garden’s current location will close.

Tonight, the show will go on as usual. But at the moment, other than bartender Alan Sato working behind the bar, the swivel chairs and the padded booths are still empty. Soon, the regulars and the happy hour crowd will trickle in. The karaoke machine won’t be fired up for another couple of hours.

Tran scans the space from his seat. “Working on this project, you meet people who have their own Bush Gardens,” he says. “I want to know other people’s Bush Gardens, because that’s what makes Seattle special.” 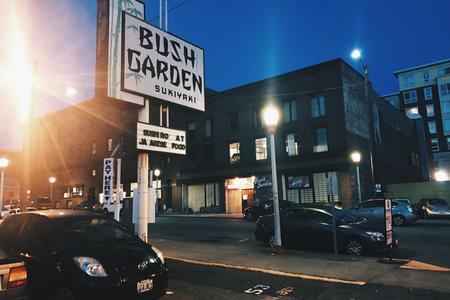 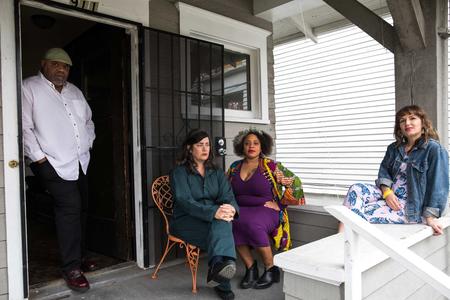 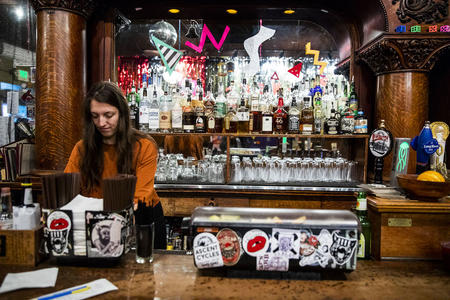 Seattle’s dive bar expert refutes the idea that King’s Hardware is the best Washington state has to offer.

by / November 1
Article continues below

Seattle’s dive bar expert refutes the idea that King’s Hardware is the best Washington state has to offer.