A writer wonders how to find community — and share matzo — over Zoom. 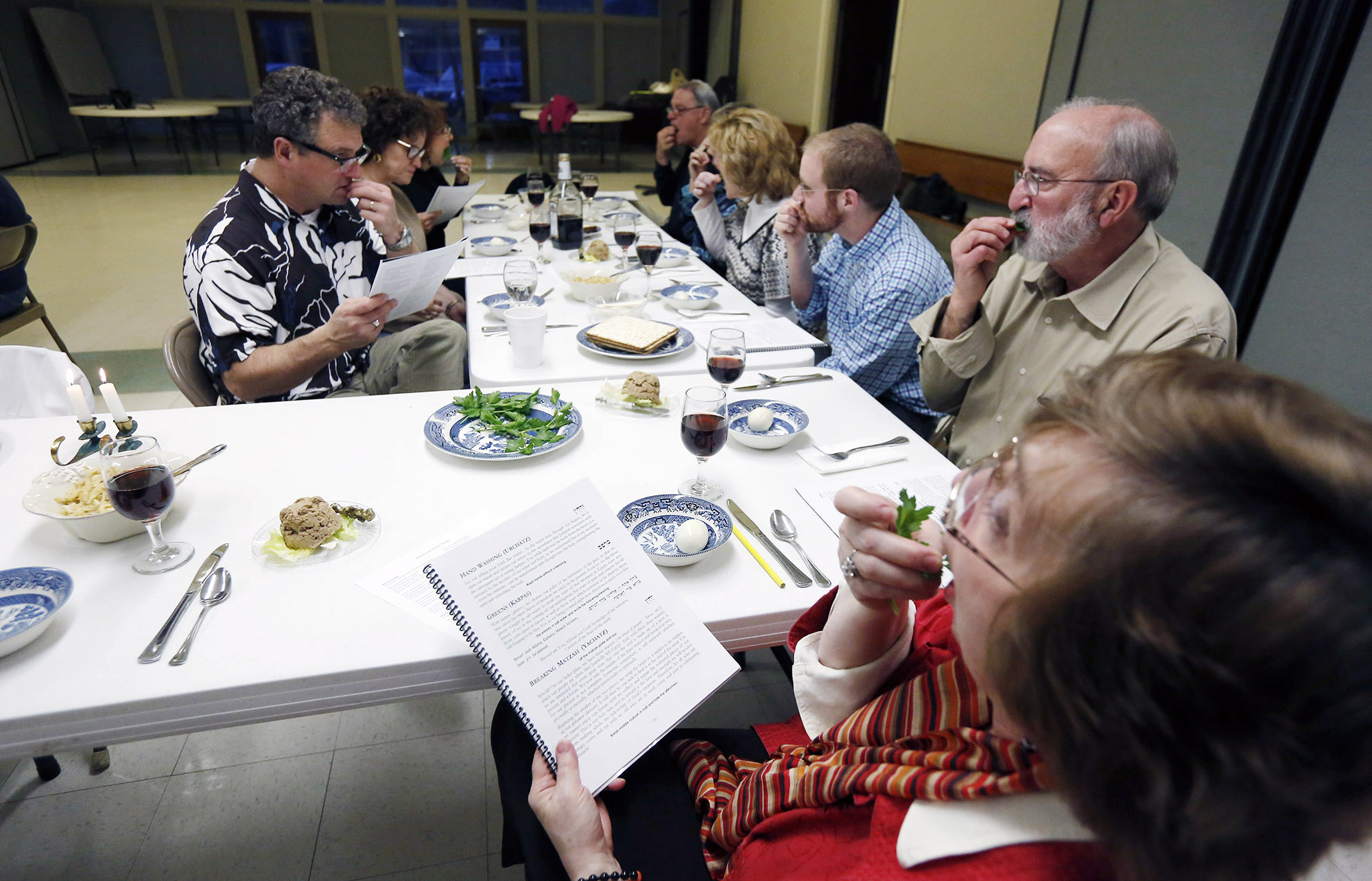 In Jewish tradition, the Passover Seder is a gathering of family and friends over food and storytelling — but coronavirus precautions are forcing a shift in ceremony this year. (Rogelio V. Solis/AP)

This week, the annual seven-day celebration of Passover (in Hebrew, Pesach) begins.

Even for Jews who aren’t religiously observant, Pesach is a meaningful rite of spring not to be missed — it’s the holiest, most interactive, most social, most touchy feely and tribal of all Jewish holidays.

During the Seder (the Passover ceremony) people communally retell the epic biblical story of the enslaved Jews’ exodus from ancient Egypt. You often share a Haggadah (the Pesach text) with the person sitting next to you, and pass ritual foods hand to hand. You sing together and get tipsy together sipping (at least) four glasses of religiously commanded wine. You cook and you eat. Oy, do you eat.

Yet, as the coronavirus pandemic rages in Seattle and beyond, rubbing elbows with friends and relations around the Seder table is not just ill-advised. It is potentially dangerous, even lethal. That’s why Jews are pulling together “virtual” Seders via Zoom and other web conferencing sites that allow you to see and hear others by digital devices.

But can there be Passover without other people in the flesh?

What about the breaking off and sharing bits of matzo (the crackerlike unleavened bread the Israelites ate as they fled from Egypt)? What about watching the assembled children search for a hidden piece of matzo in the traditional game of Pesach hide-and-seek? (Lucky me, in my childhood, it was chocolate-covered matzo.) Can it really be a holiday of “renewal and awakening” (as Seattle Rabbi Ted Falcon suggests) if you are sitting alone at your computer — and maybe battling technical difficulties, as I often have on Zoom?

I wasn’t sure. So when friends said they were transforming their sit-down-together Seder into a remote affair, I hesitated about joining in.

I’ll level with you: I haven’t set foot in a synagogue in a few years. I am married to a gentile with no interest in any organized religion. I have no young children at home to educate about their Jewish roots. I never had a bat mitzvah. And I live in the Seattle-Tacoma metropolitan region, where, according to a 2018 demographic study, there is a fairly small Jewish community — representing less than 2% of the area’s total population.

Still, wherever I’ve been, I have gone to great lengths to celebrate Pesach over the years — live and in person. I’ve attended cross-cultural Seders, feminist and interfaith Seders, Seders that lasted a couple hours and some that went on three times as long, Seders entirely in Hebrew and entirely in English. I’ve eaten gefilte fish (those strange traditional cakes of poached, ground white fish in brine) both bottled and homemade (don’t ask me for a recipe). I’ve blessed the proceedings with both the syrupy-sweet, kosher Mogen David Concord grape wine and with a fine cabernet.

Passover is an occasion when Jews are supposed to welcome to their table anyone who needs a Seder. Years ago, while traveling in France, I attended one at the home of total strangers, friends of friends. This American Jewish couple worked for an international airline and lived in Versailles — not in the opulent palace of Louis XIV, but a nondescript suburban apartment. I had nothing in common with them, but I was so grateful they took me in.

While on a fellowship in New York City one year, I finagled an invite to the Upper West Side apartment of the kindly actress Lynn Cohen (then a regular on the TV series Sex and the City). The table set for a dozen or so people took up her entire living room (that’s Manhattan for you), and a convivial bunch, mostly theater folk, squeezed in to fit. Listening to the esteemed classical thespian Brian Murray read from the Haggadah in stentorian, Shakespearean tones was like having Moses himself narrate the Jews’ flight from bondage.

Last year, when no Seder invitation to a private home materialized, I went with two other Pesach “orphans” to a big public ceremony hosted by the University of Washington branch of Hillel, a national Jewish organization for college students. Determined to keep hundreds of participants involved and entertained, the ebullient young rabbi officiating was like a standup comic crossed with a game show host. She roamed from table to table with a microphone, told corny jokes, led games and singalongs. It was shtick, but sincere shtick. (It was also lost on one female student at our table, who looked up from her cellphone only when it was time to hit the buffet line.)

Why do I hunt down a Seder each year whenever I don’t have it together to host one myself? Why is it so important to be breaking matzo alongside other humans? There is the soothing familiarity of the celebration, going back to Seders at my Polish immigrant grandparents’ house as a little girl, where I invariably nodded off on the lace tablecloth while my grandpa droned on in Hebrew. Meanwhile, his adult children smoked and gossiped, and my bubbe (grandma) stood guard over the many pots of food simmering on the kitchen stove.

And, of course, the food, the smells and tastes of food I crave only at this holiday. At no other time do I dip parsley in salt water (to signify the tears of suffering) or spread charoset, a delicious concoction of nuts, fruits and wine, on matzo with horseradish — a symbolic bite mingling the bitterness of enslavement with the sweetness of liberation.

But it is also the sense of community I crave, even among strangers participating in a joint human ritual that has been repeated for so many centuries. And it’s the resonance of the story. Since the end of World War II, when millions of Jews and others perished in Nazi death camps, Passover has often been interpreted in a more global, universal way that transcends one people, one religion.

There is a point in the Haggadah where you are instructed to chant the names of the 10 plagues God rained down on Egypt to make the Pharaoh release the Israelites from captivity. They are nasty: water turned into blood, storms of hail and fire, clouds of locusts. In many a modern Haggadah, however, the plagues we speak of are modern ones within our control to stem, like poverty, bigotry, sexism, terrorism, human trafficking.

And now we have our own plague to consider. Personally, I can’t see COVID-19 as a plague rained down from heaven. It is sickening and killing people in Seattle and around the world. It is keeping us apart physically. But is it dividing us spiritually? And morally? In many of us, it is bringing out our best instincts, forcing us to break ingrained habits, to improvise and innovate.

That’s why ultimately I accepted the invite for a virtual Seder. Our small group will be reading the Haggadah together online, as will so many groups of Jews and gentile guests across the world. We even organized a makeshift takeout service among us for Pesach food. Each of us is providing one ritual food to share with anyone who wants it — small servings of matzo ball soup, packets of charoset and (my contribution), yes, bottled gefilte fish. We’re leaving it on the porch at one person’s house, to be picked up by each of us individually.

This is comforting, more than I expected it to be. Because ultimately, it’s not what we eat on Pesach that matters most. It is the fellowship, and the desire to take the collective journey of renewal together. And that should not be limited to a single holiday. According to Rabbi Nachman of Bratslav, a 19th century Jewish sage, “The Exodus from Egypt occurs in every human being, in every era, in every year, and even in every day.” As I attend another Pesach — in cyberspace but still among others — I’m inclined to agree.