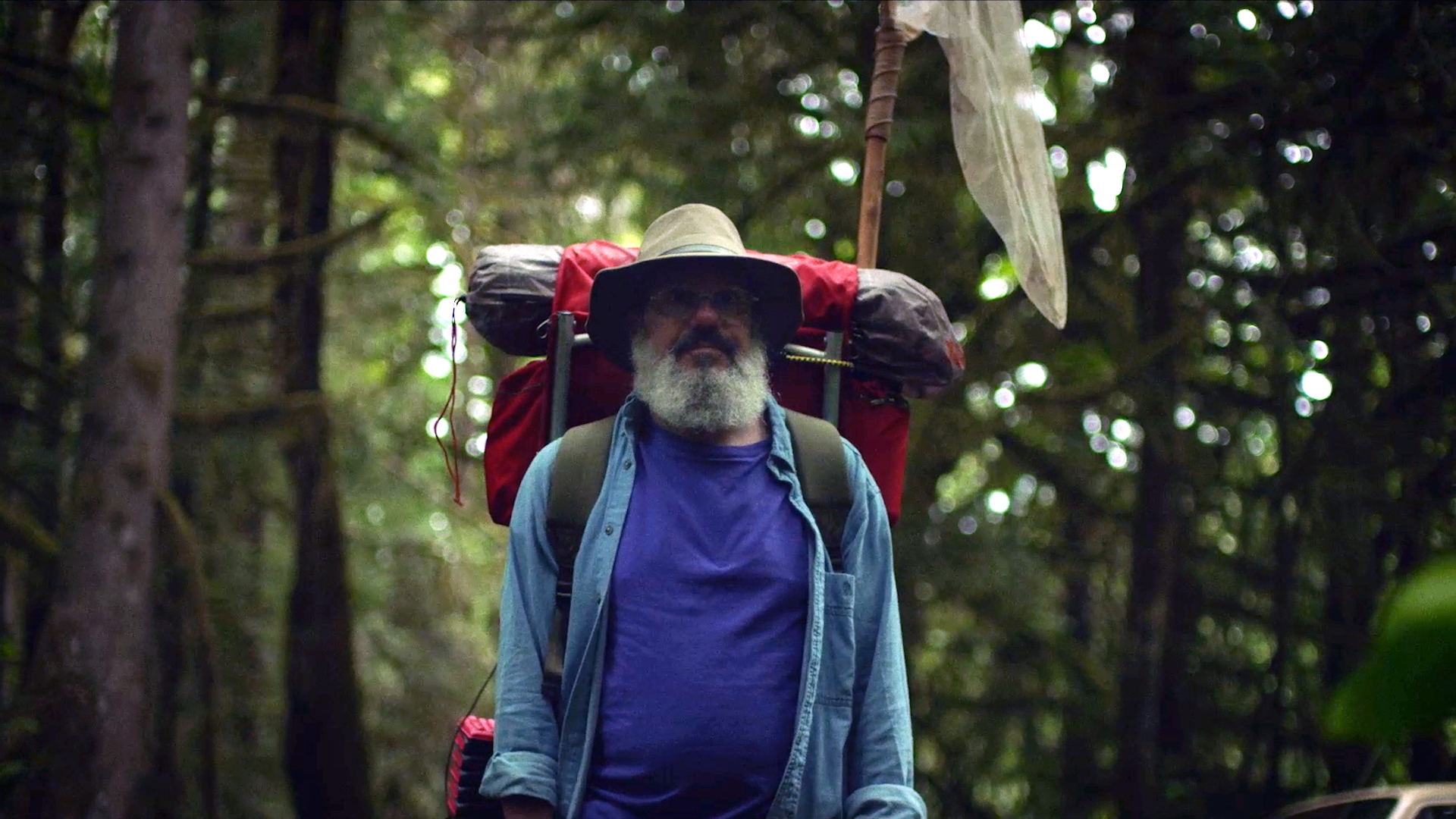 In the opening scene of the new movie The Dark Divide, a white-bearded bald man drives his Volkswagen Rabbit through dense, deep green forest. A drone shot reveals he’s the only one on the road, surrounded by miles and miles of trees. His musical choice for this epic solo journey? “Soothing Nature Sounds of the Rain Forest,” on cassette tape.

The film, starring David Cross (of Arrested Development), is loosely based on the nonfiction book Where Bigfoot Walks: Crossing the Dark Divide (1995), by Robert Michael Pyle, a Washington-based butterfly expert and acclaimed nature writer. The story surrounds Pyle’s treacherous six-week hike through the largely unexplored Gifford Pinchot National Forest in search of rare butterflies. In the wake of his wife’s death after a long struggle with ovarian cancer (which we see in painful flashbacks), he’s trying to find himself, too.

It’s also a favorite visual tactic of Northwest filmmakers, as it signals an immediate and specific sense of place. (The Dark Divide was directed by Oregon native Tom Putnam and co-produced by REI Co-op Films.) And whereas outsiders might find all this sogginess unsavory, we locals think: “Home!”

Even after the “atmospheric river” doused our region earlier this week, I relished soaking up the green glory of The Dark Divide. As Pyle trudges from Highway 12 to Mount Adams to the Columbia River Gorge, he encounters a few strangers (loggers, forest service and something his scientist brain can’t explain) and several obstacles — including the Northwest rite of passage: setting up a slippery tent in the pouring rain. But mostly it’s just him, alone in the beautiful scenery. In addition to being a good watch, the film was a reminder to me that moss porn is best experienced in person, so get outdoors. 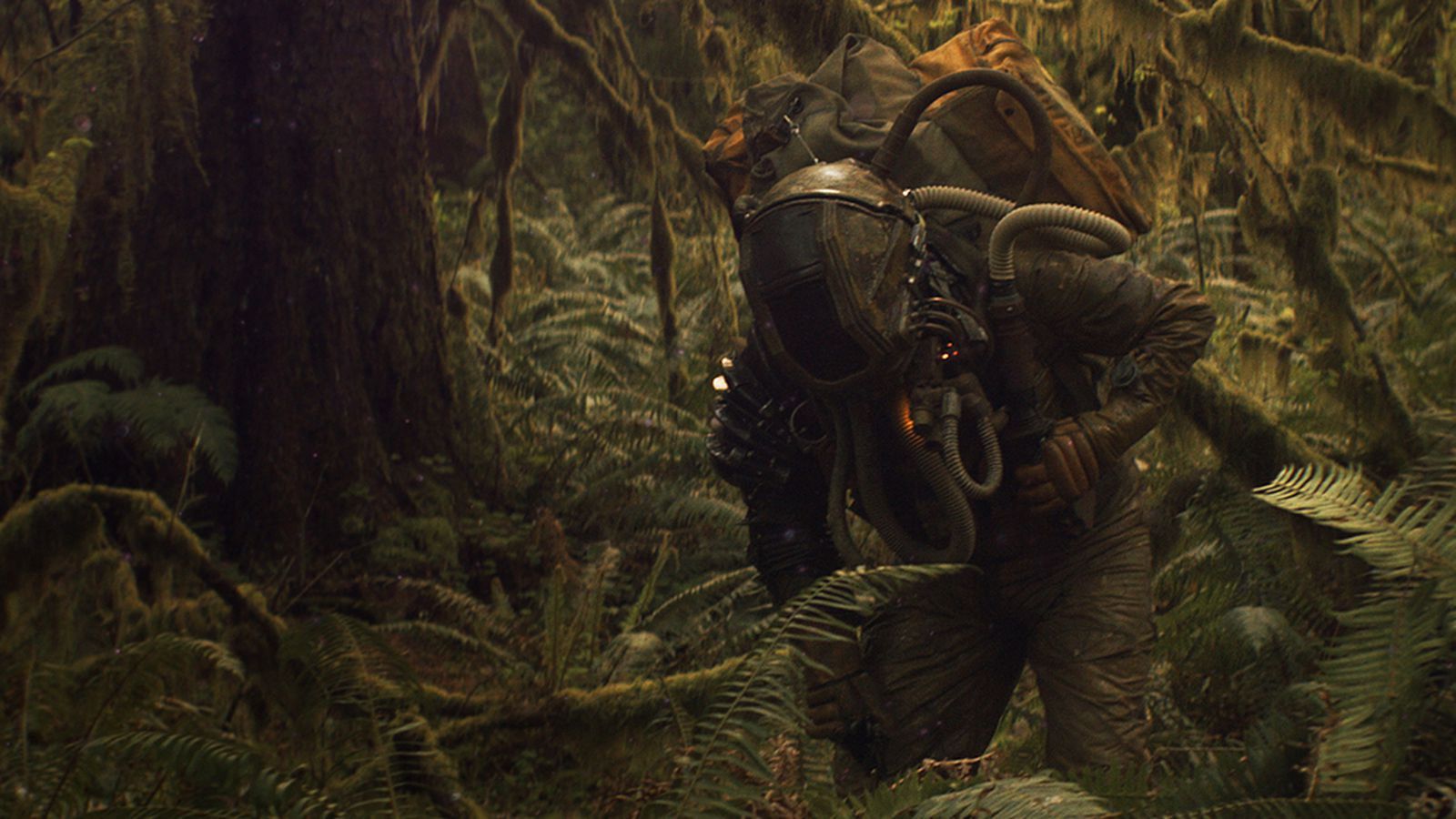 The Olympic Peninsula serves as a sci-fi setting in "Prospect." (Shep Films)

The Olympic Peninsula serves as a sci-fi setting in "Prospect." (Shep Films)

The Dark Divide is one in a long line of Northwest films that luxuriates in our sodden forests, and thanks to streaming services you can curate your own fern-heavy film festival. The Washington- and Oregon-filmed Leave No Trace (based on the true story of a father and daughter who were secretly living in Portland’s massive Forest Park) is both touching and gripping, and full of mossy grandeur. “The temperate rain forest is a glorious thing to photograph, with its textures, its patterns, its shades, its moisture, its reflections,” director Debra Granik told Oregon Public Broadcasting when it came out in 2018. Translation: moss!

The Pacific Northwest’s deep green landscape can look otherworldly — so much so that it has played stand-in for another planet altogether. Seattle Pacific University grads Zeek Earl and Chris Caldwell (of Shep Films) chose the Olympic Peninsula as the setting for their 2018 sci-fi flick, Prospect (a SIFF “audience favorite”). “I would say the primary source of inspiration for the story was the location,” Caldwell told The Verge. “From that sprouted a design philosophy around a more gritty, naturalistic type of sci-fi.” The story involves (another!) father-daughter pair, who travel to an alien moon in search of rare gems and bump into … the Mandalorian. (Well, no, but it is Mandalorian actor Pedro Pascal.)

But, wait, there’s more (moss). My friend and Seattle filmmaker Lynn Shelton (who passed away suddenly last year) was a Northwest native and big fan of forested, fern-filled scenes. You can spot them in everything from her first feature film, We Go Way Back (2006), through her 2017 movie Outside In, which features a waterlogged, woodsy cabin scene that a colleague recently referred to gleefully as, “Made me feel soggy.” 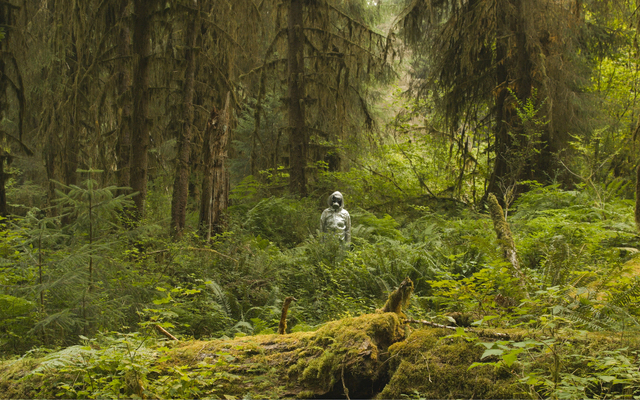 If you can’t beat the spores, join ’em. In Seattle, moss commemorations abound, from Moss Literary Magazine to the newly launched Moss Art Space, from the Hall of Mosses hike in the Hoh National Rainforest to Crosscut’s own Mossback.

Add to these Broken Poems of Fireflies, another exploration of flying insects and the current show by longtime Seattle glass artist Etsuko Ichikawa. On view online and at the Jordan Schnitzer Museum of Art at Washington State University (through March 19), the exhibit features glowing green glass balls and short films. In one film, Vitrified, a character wearing a shiny silver hazmat suit and gas mask wanders through a mossy Northwest forest and encounters a uranium orb nestled into the trunk of a nurse log.

Ichikawa says the idea was inspired by the 2011 Fukushima nuclear accident in Japan, her home country. She was also thinking about the “vitrification” technology she learned about on a visit to Washington’s Hanford nuclear facility. The concept, she says, is to turn 56 million gallons of radioactive waste into glass for permanent storage.

Filmed on the Olympic Peninsula, Vitrified is a visual poem, narrated in Japanese. Starting in the forest, the character carries the mysterious object out toward the sea, where our viewpoint shifts up into air. It’s a beautiful, ominous piece about earth and water, breath and memory. On Facebook, Ichikawa called it “my prayer for the future.” And with our beloved mossy sanctuaries newly threatened just yesterday, it speaks to what we stand to lose and what’s left after we’re gone. 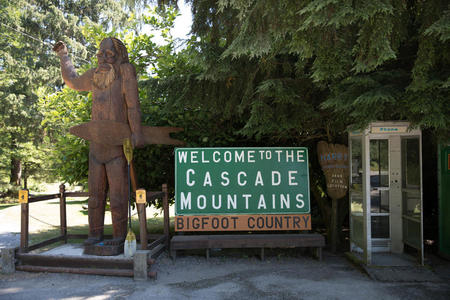