A home for Black books in the Central District, an Indigenous press in Ballard and a literally underground art studio in Pioneer Square. 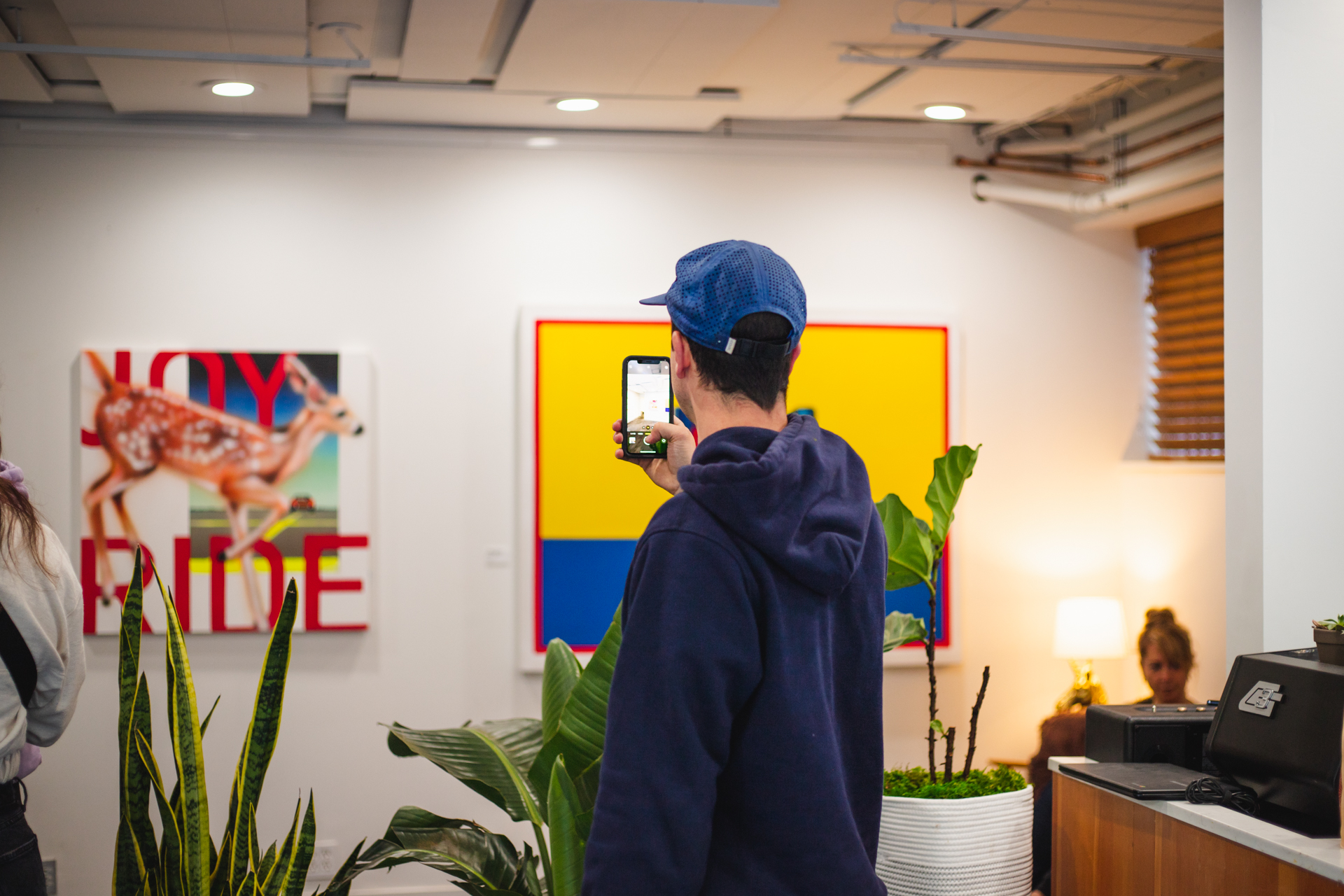 A visitor takes photos of artworks by Seattle artist Ariel Parrow, on view this summer at Assembly, a new coffee shop and art space in Ballard. (Assembly)

Confession: I’m a summer person. I don’t quite understand the Seattleites who pine for fall rains (even as I am married to one). For me, fall represents an ending. But, as I’ve come to understand, for autumn lovers, the season represents an emergence — of change, of pumpkin pie — not a closure.

That’s true for the arts as well: Fall is traditionally the moment when arts organizations turn over a new leaf and welcome back visitors with exciting new shows and exhibits. This year’s return has been particularly thrilling to watch and report on after two years of subdued and sometimes-sparse pandemic programming (though we’re not out of the woods quite yet).

Also thrilling, and encouraging: a recent spate of new art spaces that have opened or are about to open their doors, news that I’ve been squirreling away for this moment. 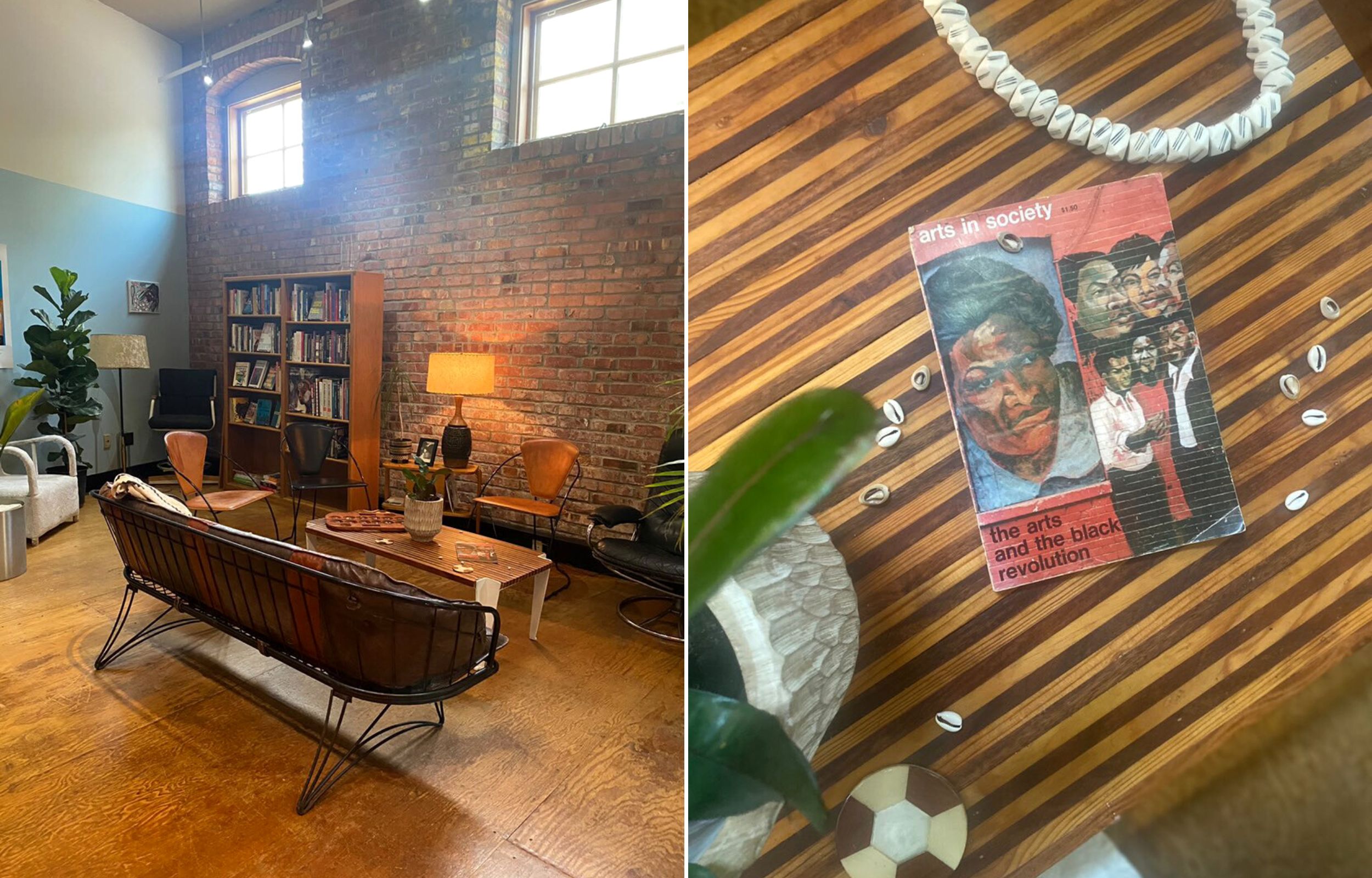 Let’s start in the heart of Seattle — the Central District. While many eyes were deservedly focused on Arté Noir, a brand-new Black art space at 23rd Avenue and East Union Street (as Brangien detailed in a recent newsletter), the neighborhood has recently welcomed a few other art spaces as well.

On a late August summer night, I paid a visit to The Cherry Pit, a new art and music collective/art space in a former grocery store on East Cherry Street. In what I assumed was a former fridge section, tall glass doors framed a bunch of blue and pink stage lights and a few mysteriously parked bikes instead of milk and yogurt. That evening, bands like Cult Sickness, Dry Socket and Yellfire played eardrum-piercing guitar music that almost blew me off me feet through sheer sonic force.

While the night (and the venue) was impossibly warm thanks to the heat wave, this spirit-of-Seattle DIY, in 2022, felt like a breath of fresh air. Keep your eyes peeled for an upcoming art show featuring more than 100 film photos dedicated to Seattle’s DIY musical past and present (Oct. 22) and a concert featuring local bands performing covers of their favorite songs (Oct. 30).

This past August, another new space opened on a major Central District arterial — Union Street: LOVING ROOM: Diaspora Books + Salon, a bookstore-meets-salon for Black and African diaspora literature. Founder Kristina Clark had been dreaming about starting a Black-owned community reading room and, as she puts it, “a space for Black ancestral healing” for more than a decade.

“What could it mean for our youth to access a literary space that nurtures the entirety of our radiance? A space that encourages us to read, to know, and at once to stay bold, bright, and Blackity-Black-Black-Black?” Clark writes on her website.

Now a reality, the salon (open Wednesday through Sunday) carries both new and used books by U.S.-born Black authors, as well as African and Caribbean diaspora writers, to be read on-site, along with a variety of new current titles people can purchase. Clark plans to offer public programs as well, including a weekly children’s story hour, youth read-aloud events and a young writers’ club, plus poetry soirees and book clubs for adults and more.

Last but not least: Just this month, after a year of renovations, Africatown Community Land Trust unveiled its new William Grose Center for Cultural Innovation (WGC). Housed in Seattle’s iconic Fire Station 6 building at 23rd Avenue and Yesler Way, the center is meant to, as Africatown’s Wyking Garrett wrote over email, bring “brilliance from our community into the thriving tech and creative industry sectors.”

Programming is officially starting in October with out-of-school offerings for “existing and aspiring entrepreneurs” to learn coding, digital content production, marketing, virtual reality development and more through partnerships with the University of Washington, Microsoft and other local companies. 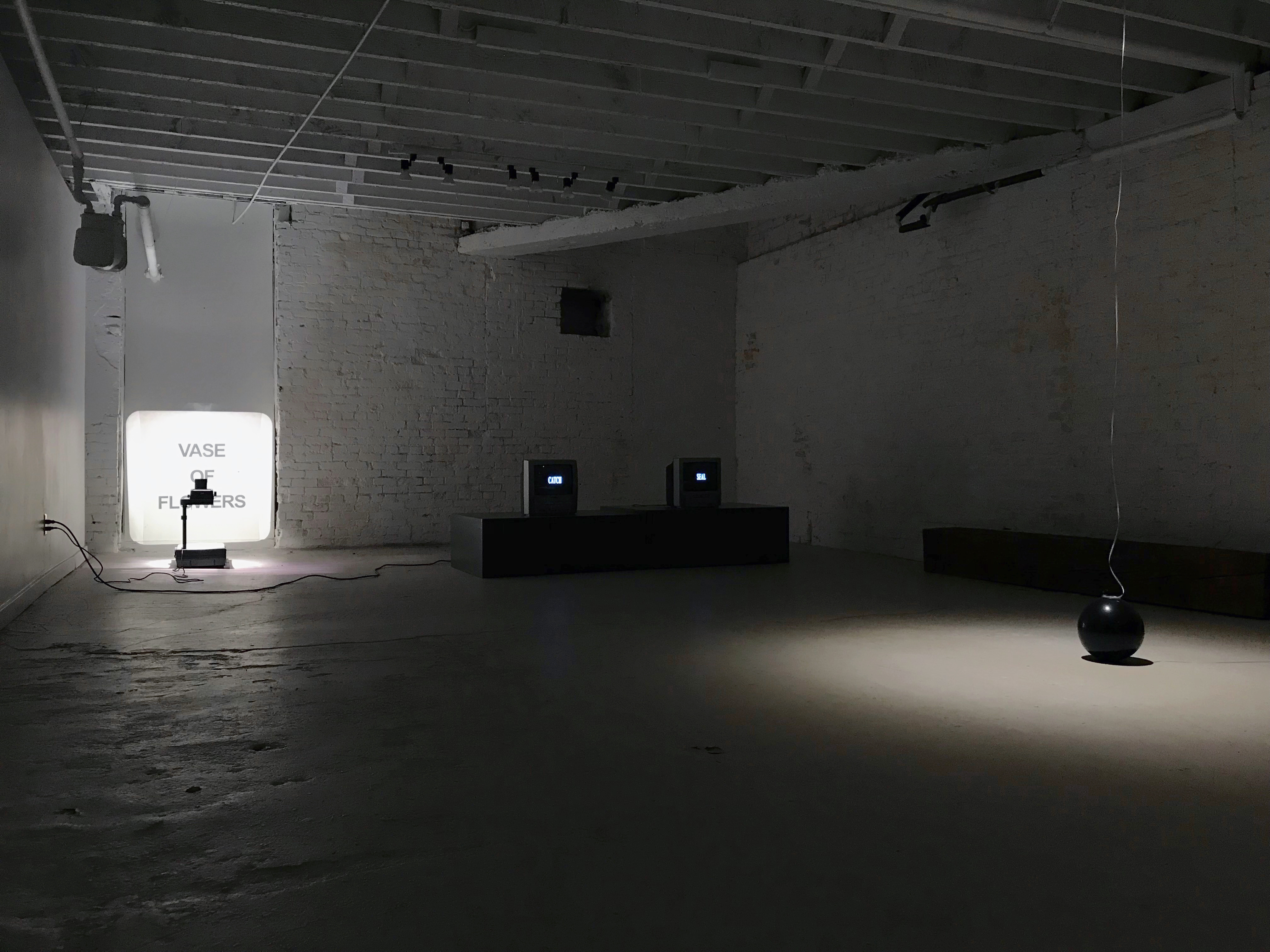 Artworks by multimedia artist Lee Corbin on view in the basement of 210 South Washington Street in Pioneer Square, where a new artist studio and exhibition space recently opened. (Lee Corbin)

Artworks by multimedia artist Lee Corbin on view in the basement of 210 South Washington Street in Pioneer Square, where a new artist studio and exhibition space recently opened. (Lee Corbin)

And that’s just the Central District. On Capitol Hill, I’ll be looking to get my vintage and art fix at a new vintage and new clothing/design shop from the people behind Ballard’s highly aesthetic Prism store. Slow Dance opened last month with an excellent showing of local artists, including Brandon Vosika, Ilana Zweschi and Nikita Ares.

Things get a little grittier over in the basement of 210 South Washington Street in Pioneer Square. The space doesn’t have a fixed name — “It tends to change with each exhibit,” founder and multimedia artist Lee Corbin wrote in an email. (When I visited during September’s Pioneer Square Art Walk, Corbin told me it was called “Chihuly Frisbee.”)

During that September visit, an old slide projector cast tall black letters spelling “SCENIC VIEW” on a screen, and downstairs, artist Paige Madden had painted onto the wall semi-abstracted collages of broken-down faces, while Nicholas Von Hessler’s soft art — beige fabric dense with thin dark lines like earth strata  — hung from the bare walls. There were no name plaques or titles, just the artists’ Instagram handles, also painted on the walls.

The space is technically the studio of three artists — Corbin, Madden and Von Hessler — who also see the space as an opportunity to invite other artists to show their work. The still-unnamed space will be open during Pioneer Square’s upcoming First Thursday art walk next week (as well as by appointment). 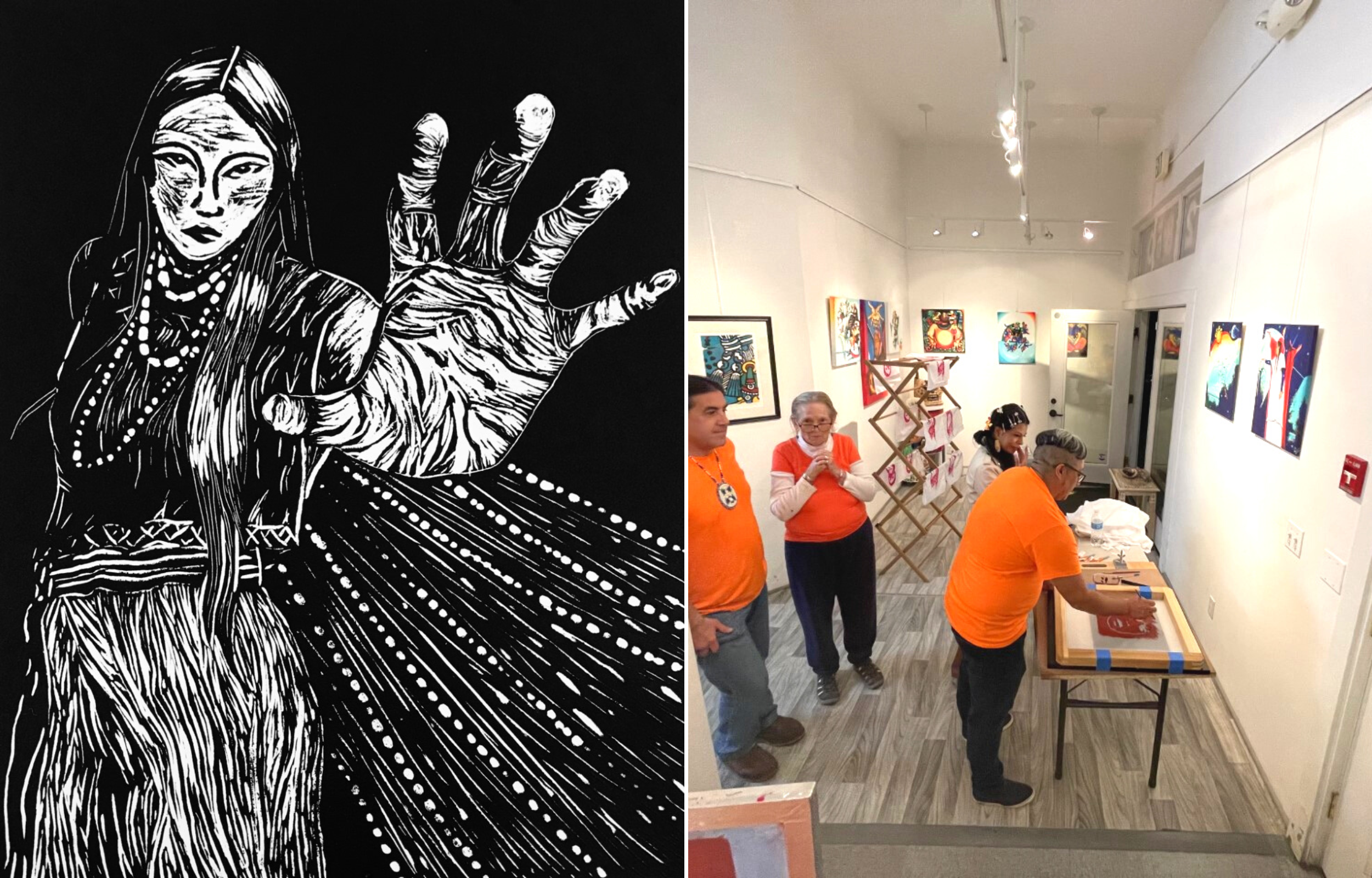 Let’s head North, to Ballard, for a few more exciting new art spaces to add to your to-see list. There’s Assembly, a coffee shop-meets-creative marketing agency office-meets-gallery and event space. “We are that third space for new and exciting businesses and brands and creatives to debut their creations to the world that perhaps aren't big enough for the SAM or whatever the popular new coffee shop is,” founder Molly Hawkins told me over email. “We want to be known for hosting the little guy, newbs and the folks who are just about to break out!” A show by local artist/designer Shogo Ota, featuring his many eye-catching posters for local bands, is opening this weekend.

Rounding out our list is YOLTEOTL Press, a new Indigenous-led printmaking studio and gallery. Housed in the BallardWorks building and named after the sacred responsibilities and gifts of the painters and printmakers of the Mexika-Tenochca people, the space will offer workshops in printmaking and other art forms, exhibits and community events.

“As a Native artist, I see not enough Native art spaces, yet the level of appropriation of art is incredible,” writes owner and printmaker Ixtlixochitl White Hawk (Nahuatlaca Tenochca, Otomi and Tarascó) in an email. “When I moved back to Seattle, 8 years ago, I promised my child our own art studio and gallery. A place where we could create and dream anytime of the day and night.”

While not literally open day and night, YOLTEOTL Press will open its doors during workshops and community events — like the Indigenous Peoples Day “art build” on Oct. 7 — as well as by appointment and during the monthly Ballard Art Walks; mark your calendars for the next one October 8.

Pioneer Square’s and Ballard’s art walks are happening next week, so I want to make sure to put some other local art events on your radar:

< Through Friday, the literary festival Bibliophilia “brings the page to the stage” at the Seattle Public Library, with “Vonnegut” (Sept. 29, creating a Kurt Vonnegut-style play based on audience suggestions) and a “Quiz Show” (Sept. 30, with games, prize packages and live reading and performance).

< Artist Tiffany Danielle Elliott discusses I promise I won't scream, her participatory sound installation  — in which Elliott explores how to store sound vibrations — at Jack Straw New Media Gallery. The work deals with the effects of suppressing screams and “silent screaming.” (Sept. 30, 7 pm).

< As part of “Indigenous Corps of Discovery Presents Don’t Go North!” artist DeLesslin “Roo” George-Warren created a tour that provides an indigenous retelling of The National Nordic Museum’s current exhibit about the 19th- and early 20th-century history of the American West and northern Norway. (Sept. 29-30, 6-8 p.m.)