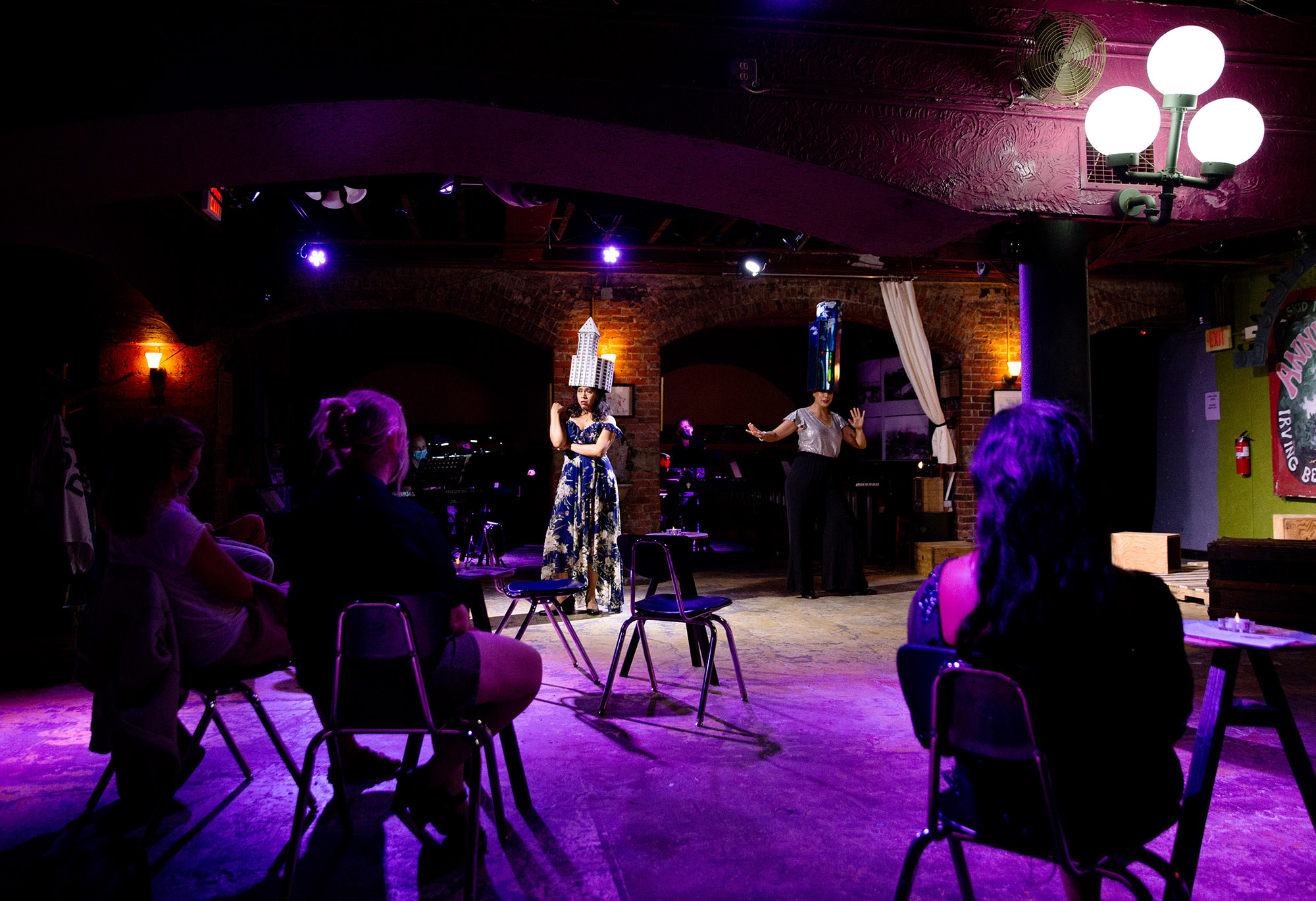 Actors Viviana Garza and Lorena Del Pino perform as the Smith Tower and the Columbia Tower during “People in the Square,” a cabaret-style musical at the New Skid Road Theatre in Seattle’s Pioneer Square, Wednesday, Aug. 10, 2022. (Lindsey Wasson for Crosscut)

Nerves. Excitement. Buzz. For the arts sector, fall is “back to school” season, a time to reconvene, put your best foot forward and reveal all the new shows (and maybe some new outfits, too). But this year the anticipation is mixed with feelings of worry: Are audiences ready to come roaring back?

A Crosscut survey of local arts and culture venues suggests that so far, the answer is: Not quite. Attendance data gathered from two dozen museums, concert venues and other cultural institutions across the city show that patrons have been slow to return since the pandemic shutdowns.

Across the board, attendance has not surpassed three-quarters of pre-pandemic levels in the past six months, surveyed venues said. Between February and July 2022, visitor numbers remained between 35% and 75% of those during that same period in 2019, with many hovering near 50% or 60% of pre-pandemic levels.

The numbers at these local venues mirror a nationwide trend of lagging attendance recovery, below some projections for 2022 and in line with a “worst-case scenario” modeled by SMU DataArts. Even the organizations with attendance percentages at the higher end of the scale are feeling the financial impacts. And as inflation (and thus costs) remains high and donor support tepid, the financial calculations can be daunting.

“Balancing rising costs and smaller audiences with our mission-driven efforts to keep shows cheap and artists and staff well-paid is increasingly difficult,” said Ricky Graboski, executive director of all-ages music venue The Vera Project. Since reopening in February, attendance has improved but still lags about 25%-30% behind pre-pandemic numbers, Graboski said.

“We’re ecstatic to be open again since many of us were closed for over a year, but it’s still a struggle,” said the owner of a prominent Seattle music venue who preferred to remain anonymous. The venue’s audience numbers are hovering between 60% and 65% of its pre-pandemic numbers, in part due to canceled tours and “massively fluctuating” attendance numbers.

“We’re still losing $. It’s really expensive to run a venue and when you pay bands guarantees, you have to pay whether people show up or not. It’s just so much more unpredictable than it’s ever been,” the owner wrote. “Venues are still going to struggle for quite a while longer.”

A few disclaimers to the numbers: Ticket purchases are typically lower in summer, so many organizations expect their numbers to climb in the next few months as new shows open and people return from summer vacations.

And in some cases, the numbers are lower in part because an organization hasn’t yet fully resumed pre-pandemic operations and has to work with limitations on programming, audience capacity and open hours.

But mostly, venue managers said, the pandemic itself was to blame for the slow attendance recovery. “This pandemic didn’t end in February, and while we are very focused on the safety of our audiences and continue to require masks in our theaters, many are reluctant to return just yet,” said Elodie Rousseau-Vercel, communications director for the Seattle International Film Festival. Older patrons seem particularly reluctant: “The older they are, the harder to predict whether people are going to come out or not,” the music venue owner said.

Location is also a factor. South Lake Union art space MadArt says that with so many people working from home, the neighborhood has been far less populated, resulting in fewer walk-in visitors. Some venues noted that visitor concerns about dwindling parking options, COVID safety on public transit, traffic-snarling construction projects and downtown safety have added to a general hesitancy to return.

One survey respondent pointed to the impact of inflation on personal budgets. Economic theory backs this up: As spending power wanes, industries that rely on discretionary income, like the arts, tend to suffer, according to Anneliese Vance-Sherman, a labor economist with the Washington State Employment Security Department.

Graboski of the Vera Project points to macro-economic forces as well, noting that dwindling ticket sales seem “more indicative of the harsh realities of King County’s economic and social crises than anything else.” He adds that his organization’s (free) educational programming and community organizing, mutual aid and direct service work are more popular than ever. “Most young people that I know are a whole lot more concerned about finding housing, adequately compensated employment and accessible means of transportation than tickets to a show at their favorite all-ages venue,” Graboski says.

But many more of those surveyed noted a trend that appears much more intractable: The pandemic seems to have shifted people’s behavior in a more fundamental way than perhaps previously thought.

“Many people… still seem to be operating with a COVID ‘risk budget,’” said Ingrid Langston, head of communications at the Frye Art Museum. She posits that people are “approaching their activities [or] social outings much more selectively than in pre-pandemic times, or perhaps have become used to accessing content virtually.” SIFF’s Rousseau-Vercel echoed the latter concern, pointing to the “power and convenience of streaming platforms” as one possible culprit.

Jordan Lusink of Seattle Shakespeare agreed. “People became accustomed to not making plans in the evenings,” she said. Peggy Gannon of Central District theater venue 18th & Union explained it like this: “Saying no and staying home was a necessity and then became a new habit.”

It was a popular theme in the Crosscut survey. “It’s a much higher bar than it used to be to convince [audiences] it’ll be worth it to make the effort to see live performance,” said Ellen Abram, executive director of theater ensemble The Williams Project. As the music venue owner put it: ​​“People are choosier than ever about what shows they want to go to.”

“Quantitatively, revenue from sources like education programs, membership renewals and museum-store sales are down,” said the Frye Museum’s Langston. “Qualitatively, staff morale suffers when there is a feeling of disconnect from the community that results from reduced visitation.”

The dip in audiences is also affecting drink and food sales at venues, further depressing revenue. Plus, as some organizations noted, it makes fundraising and selling subscriptions harder. Research from art data firm IMPACTS Experience, albeit from pre-pandemic times, indicates that no-shows can impact organizations more than some may think: For every visitor who did not show up during a museum’s closure, the institution actually lost 1.25 people over the year, because of missed word-of-mouth and social media posts. As an IMPACTS Experience blog post puts it: “Visitors and patrons are by far an organization’s best marketing and advertising.”

Town Hall is feeling that, too, says advancement director Kate Nagle-Caraluzzo. “Though our tickets are only $5, we’re reliant on people spending time in our building and renewing their memberships and donations to help support our operating budget,” she says. “People often fall in love with Town Hall by experiencing the building — spending time in a historic space, literally rubbing elbows with strangers in the pews, and taking in new information. The more time you spend on the building, the more likely you are to support us with a donation or a membership.”

​​This hailstorm of financial hits has caused a critical situation for some. “Right now we are OK because we still have [government] pandemic funds on hand, but it is getting to the point where that money has run out and I’m not sure what we’ll do,” wrote one arts organization leader who asked to remain anonymous. “I expect it will have to affect staffing somehow.”

To make things worse: Multiple organizations say donations by individual, foundational and corporate donors are down. And with what many see as the last rounds of recovery funding currently making their way to the sector, some anticipate a funding cliff. “The numbers just aren’t rising fast enough for what I’m fearing is going to be an immediate drop-off of federal funding after this round of ARPA funding,” says Erin Johnson of dance company Velocity.

“Government support has been really important and is going away — or gone,” said Lusink of Seattle Shakespeare, “which makes these rebuilding years feel unstable.”

Abram of The Williams Project warns of a domino effect. “There’s a tendency among some funders and government officials to treat audience numbers as the only important metric for the impact arts organizations have,” Abram says. “…At this stage of pandemic recovery, that will result in a death spiral for the field. Without ongoing, increasing financial support, our organizations won’t be able to take risks on big, adventurous work that will excite people back into the audience. We won’t be able to increase pay to keep artists local and working in their creative fields, and depleting the talent pool will negatively affect the quality of the work onstage, which ultimately will further deplete audiences.”

Meanwhile, organizations are hacking together solutions to bring (new) audiences in. For some, it’s presenting fewer shows that run longer; for others, it’s fewer performances per production. Perhaps it means increasing ticket prices, maybe it’s lowering them — or doing away with them altogether.

In the fall of 2021, the Henry Art Gallery changed its admission model from fixed-price paid admission to a “suggested donation” as part of the museum’s effort to lower barriers to visitation and be a more welcoming institution. “We have found that those who can be generous often choose to do so knowing that their ticket supports entry for those who may not otherwise be able to afford a visit,” said Henry spokesperson Tanja Baumann, “which in turn has had a positive impact on our finances.”

While some organizations are focused on fee structures, the Henry and others are using this moment to rethink who they attract and how they engage with visitors, offering more free programs or showing art outside their buildings.

Data suggests that cultural institutions across the country have made some progress on that front. According to IMPACTS Experience, since 2019, the percentage of first-time and non-recent visitors has increased and “welcoming perceptions” among non-white audiences have improved as well, but there is still a long way to go.

“We are still working to recover from the effects of the closures and attendance numbers alone don’t tell the whole story,” said Seattle Art Museum director and CEO Amada Cruz. “The bigger question we are asking is: Who is being served by, represented in and engaged with the museum and its mission? And who is not?” 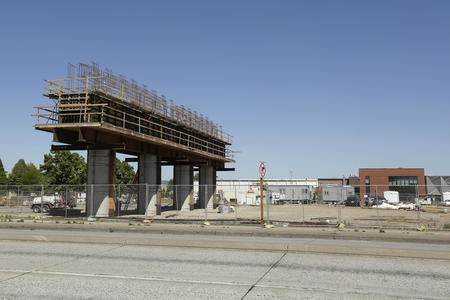