Memorable conversations from the 2021 Crosscut Festival

From local art and pandemic disruption to climate change and Black history, here are the discussions you don't want to miss. 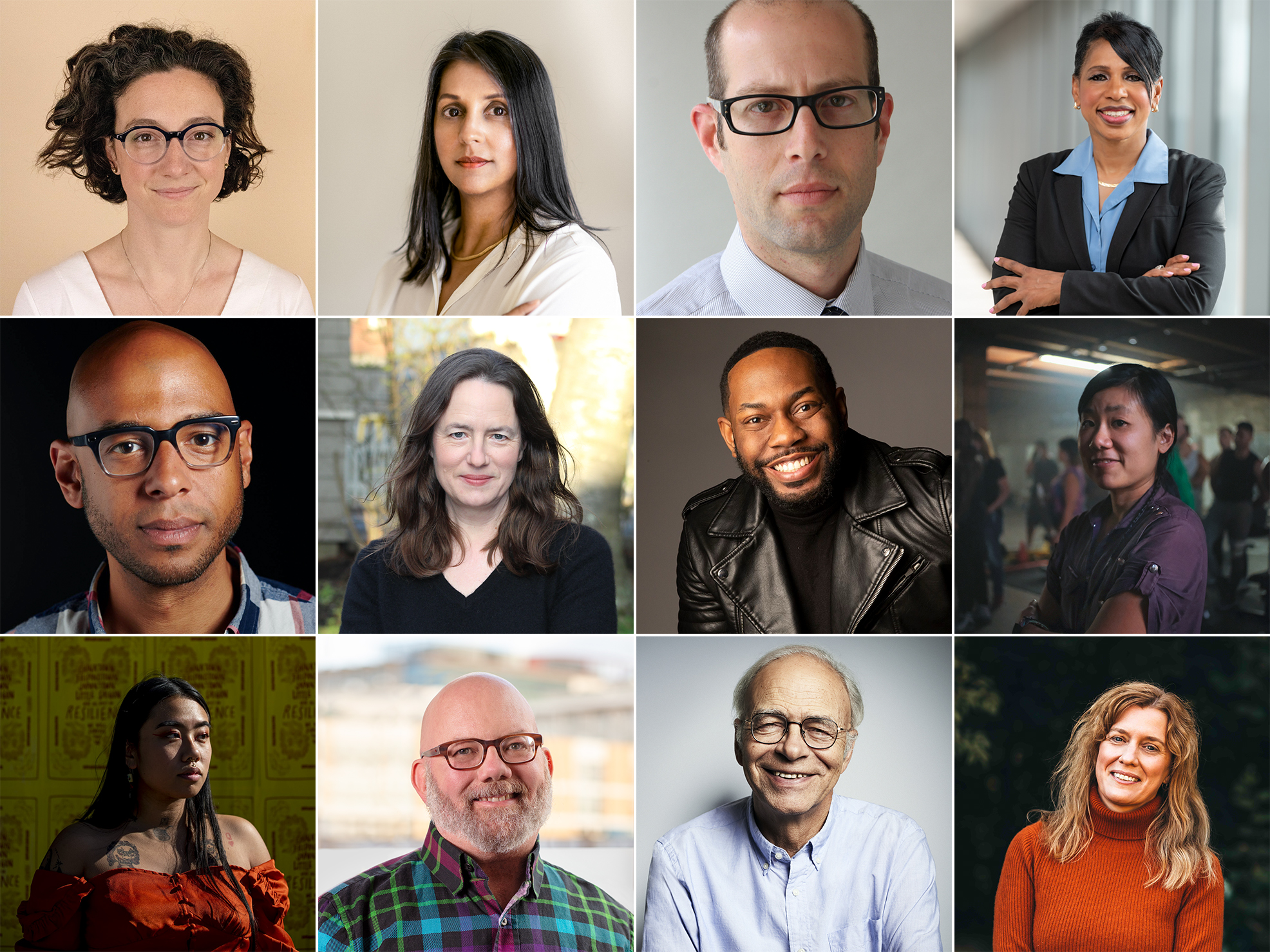 After the onset of the pandemic canceled last year's Crosscut Festival, we were thrilled we could bring you into 33 conversations over this last week. Thank you all so much for joining us — and for asking our speakers such thoughtful questions!

After such a memorable festival, we invited members of the Crosscut newsroom to share what panels our audience shouldn't miss, and what they've learned from our 67 guests.

Stephen Hegg, Video Producer: It’s so refreshing to hear directly from some of the great thinkers of our age, rather than to be “following the news” or wrestling with ideas presented by second-hand voices. It makes me want to dive in, and I have already bought four books that were discussed at the festival.

Jane Goodall presented such a cogent argument for alleviating poverty as a crucial step in dealing with climate change. Alicia Garza and Errin Haines opened my eyes further about the political organizing and power around Black Lives Matter movements. Ibram X. Kendi/Keisha Blain riveted me with how they put together the writers to describe 400 years of Black history in America.

The moderators were all superb — very skillfully chosen. They added so much to the learning experience.

Anne Christnovich, Audience Engagement Manager, on Fixing Democracy: The Filibuster, Statehood, Supreme Court, Voting Rights, Electoral College: I was already a huge fan of Dahlia Lithwick, but guests Adam Jentleson and Elie Mystal were phenomenal. The most surprising thing I got from the session was: hope? The ideas of filibuster reform, expanding the courts, yes, they’re really difficult initiatives but they’re not impossible. Mystal in particular was so passionate about the topic, and he broke it down in such a fantastic, energizing way. I feel like I understand these topics better — and I believe in them more, too.

Another moment that will stay with me from this year’s festival: Brangien Davis’ session Art in a Year of Unrest with Teddy Phillips (aka Stat the Artist), Steven Miller and Monyee Chau. Teddy was talking about how it’s hard for him to look at his own Instagram profile on some days because his work comes from such a deeply affected place. While he was speaking, I pulled up his Instagram and was just immediately overcome with the beauty, the grief and the celebration for Black lives in his work.

Brangien Davis, Arts & Culture Editor, on Art in a Year of Unrest: The panel featured three Seattle artists who made work in direct response to the pandemic and the Black Lives Matter protests. I knew going in that their artwork — whether in the form of posters, a "takeout menu" full of history or photographic portraits — was both aesthetically lovely and also had served as a form of community outreach during a difficult time.

What really struck me as we were talking, however, was how these artists felt driven to connect with people, to reach out from lockdown and say, "You think you’re alone … but we still have each other," as graphic artist Teddy Phillips put it. Multimedia artist Monyee Chau added that talking with people in her Chinatown-International District community reminded her, "We’ve gone through ‘yellow peril’ before … and there’s so much strength in being together," a sentiment she incorporated in her resiliency posters. And photographer Steven Miller noted his surprise at how strongly his images of people alone in their homes, behind windows, resonated on social media. "I didn’t realize how big a community builder it would be," he said.

The artists in this group evidenced that artists don’t work in an echo chamber. For most, the whole point is to connect with an audience, even if just one person. This panel made that abundantly clear, as well as the truly vital role art and artists play in societal mood, outlook and understanding.

Knute Berger, Crosscut Editor-at-Large and Host of Mossback’s Northwest, on How the South Won the Civil War: The highlight of the festival for me was getting to talk with historian Heather Cox Richardson, who has a compelling new look at history in her book, How the South Won the Civil War. It has such current relevance. In light of that, I was also intrigued watching two GOP Trump critics wrestle with the future of the Republican Party, columnists Ross Douthat and Henry Olsen who were ably questioned by Mónica Guzmán. I came away with the sense that the GOP’s reckoning with itself is contentious and the shape of a post-Trump party — and conservatism — is very much up in the air.

Mason Bryan, Associate Opinion Editor, on Hard Truths: Racism & Allyship: Listening to Robin DiAngelo’s conversation with the scholar Dr. Jason Johnson this week, I was struck by just how much has changed in the discourse around racism and white supremacy in the last year. Thanks to popular works by DiAngelo and others, including Ibram X. Kendi and another hugely successful hometown author, Ijeoma Oluo, the public conversation suddenly feels more nuanced and mature than at any point in my adult life. These books, of course, are not immune to criticism. But for popular audiences they have provided an entry point — a language and framework — to a conversation that cuts to the core of our national identity. This year, especially, we needed their voices, and I’m glad the Crosscut Festival made space to be in conversation with their ideas.

Donna Gordon Blankinship, News & Politics Editor: I walked away from Robin DiAngelo’s conversation with Dr. Jason Johnson with just the opposite thought: How little has changed and how much more work we have yet to do. I have attended many of the sessions from the festival, my first at Crosscut, but the ones that made the strongest impression have been the conversations about racism. Many of the speakers were truly profound and deeply thought-provoking. But there were so many moments when we witnessed one of the speakers just shaking their head or sighing and then speaking truth about what a mess we’ve made in this country and how little progress we’ve made in our anti-racism work. Most appeared to remain hopeful, but it’s hard to imagine why.

Mark Baumgarten, Managing Editor and Host of Crosscut Talks, on How To Get Red America to Go Green: I grew up in farm country, so I was really excited to talk to Jon Tester about how his party plans to sell climate policy to rural voters. Tester is a farmer, so I was expecting him to bring a very informed perspective to the issue and the challenges the party faces. What I wasn't expecting was for him to be so open about the fact that he doesn't really talk about climate policy with his constituents, though he said he should. I defined it as a 'third rail,' as politically untouchable, and he didn't push back on that. That answer alone told me so much about the challenges that climate policy continues to face in rural America.

Ted Alvarez, Science & Environment Editor and host of Crosscut Escapes, on The Great Climate Migration: "Climate migration" is such a fraught idea that it would be easy to expect the conversation to be dominated by doom and gloom. And while there was plenty of that — people fleeing wildfires, drought and rising sea levels to cause global disruption, oh my — the broader takeaway was largely optimistic. Sonia Shah especially framed our migratory instincts as part of the human condition, something that we have always done to survive. They both pointed out the positive takeaways, and how that actually might boost the resiliency we’ll all need to last through the next few centuries. Everything from innovation to fixing our domestic birthrate problem with changing attitudes toward immigration to the benefits of a mixing, diversifying gene pool pointed to a promising future despite our current worries. And they both pointed out that while we exist in a period of rigid nationalism and closed-mindedness that would seem to prevent that kind of cooperation, those periods in history tend to be relatively short outliers that the inertia of migration eventually overcomes. And technologically, we’ve never been in a better place to set the stage for that migration to succeed in positive ways.

Moh Kloub, Audience Engagement Editor: I was surprised in the best way to hear science author Sonia Shah speak about "a future in which migration is not a source of fear, but of hope." It can be very difficult when looking at the effects of climate change to think about the migration it will cause with a sense of hope, but hearing that was helpful for thinking about a better future. I would definitely try to go to more sessions myself next year. There were just too many good ones.

This story first appeared in Crosscut's Weekly newsletter. Want to hear more from members of our newsroom? Sign up for our newsletter, below.