Why has Amazon been so quiet about Seattle’s new business tax?

The e-commerce giant may still make moves to cut costs, but that just defines the next fight. 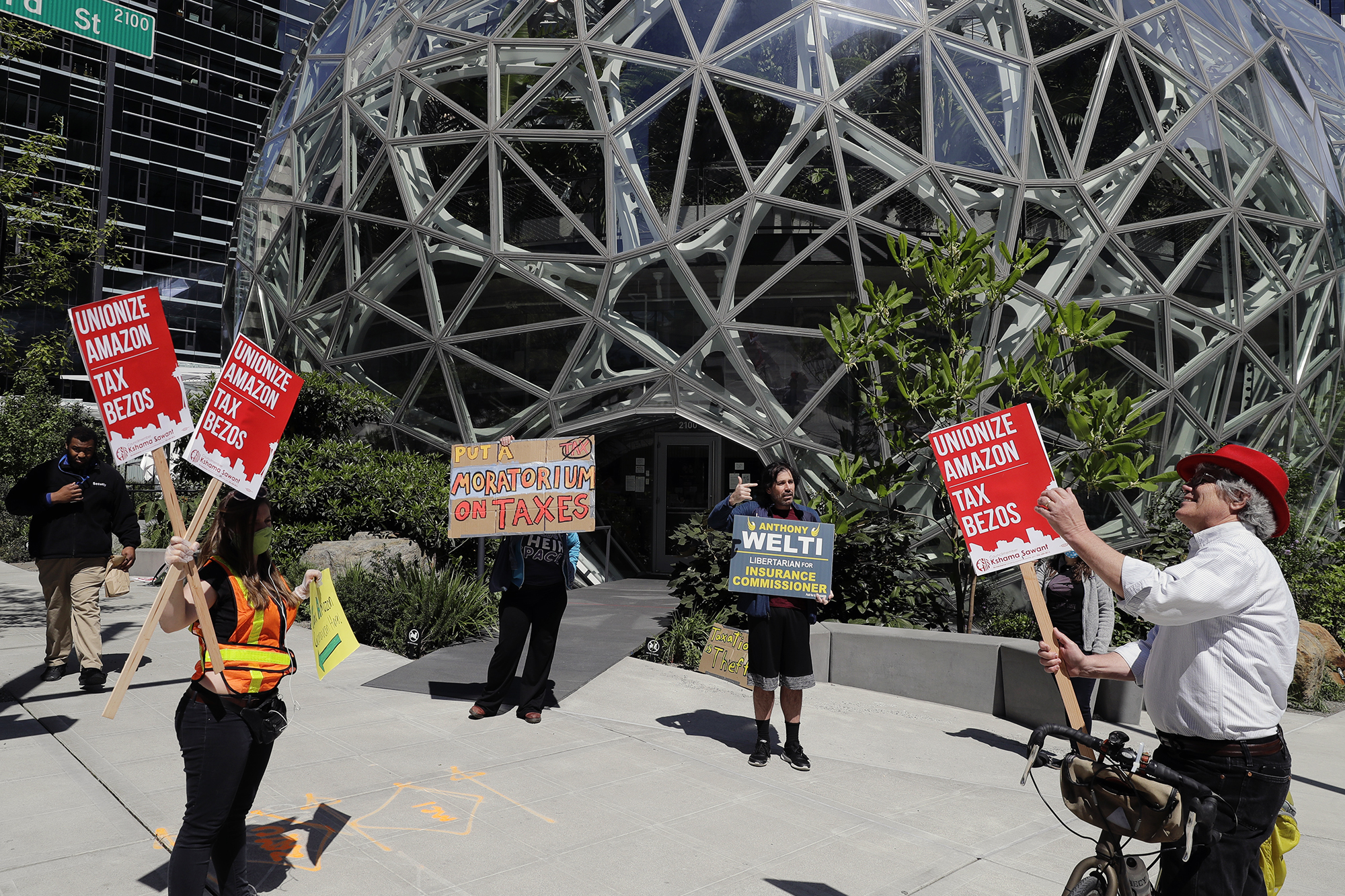 Protesters holding signs that reads "Unionize Amazon Tax Bezos," debate with protesters opposed to taxes of all kinds, Friday, May 1, 2020, at the Amazon Spheres in downtown Seattle. May Day in Seattle traditionally brings large protests and demonstrations from many groups and causes, and this year some people stayed in their cars or otherwise tried to practice social distancing due to the outbreak of the coronavirus. (AP Photo/Ted S. Warren)

Hey Jeff, is everything OK?

Two years ago, when Seattle tried to tax big business, Mr. Bezos pulled out all the stops. First came the threat of a capital strike that would cost the city 7,000 to 8,000 jobs. Then came the city hall hardball, as Amazon negotiated the measure down from $75 million to $47 million. Finally, as soon as the compromise passed, the company reneged, pitching in to fund a referendum campaign. When the Seattle City Council repealed the legislation a scant month later, that’s how Amazon must have hoped the story would end.

No such luck. Last month, the council passed into law a much larger measure, a payroll-based business tax expected to raise well over $214 million per year. As a corporation with Seattle payroll over $1 billion, Amazon, and perhaps only Amazon, will pay higher rates than your run-of-the-mill big business. Amazon’s bill alone could easily exceed $47 million, maybe by a lot.

The company’s public response so far? Crickets. No threats, no referendum, not even a measly lawsuit. Has Amazon lost its fighting spirit?

It’s possible Amazon learned a lesson last fall, when pouring nearly $1.5 million into Seattle’s city council elections backfired spectacularly. Maybe our corporate overlord is finally learning that swinging a sword around in Seattle politics is like cutting off the Hydra’s head.

It’s notable, too, that Amazon has had a rough year. I’m talking about reputation, not money — in fact, the company is enjoying explosive growth, with second quarter profits doubled and sales up 40% over last year. But that’s part of the problem. It’s hard to feel sympathy for a corporation whose CEO just keeps setting new records for personal wealth, while the rest of us are clinging to an economy on life support. And it doesn’t help when that corporation fires warehouse workers who speak up about COVID-19 protections and tech workers who criticize its climate policies. When a senior vice president resigns in disgust and starts calling for unionization, you know you’ve got a PR problem on your hands.

But the difference between this tax fight and the last one isn’t just about Amazon. There’s also the broader political climate and the caprices of public opinion. 2018 was the year of the enraged NIMBY. This is the year of defunding the police.

We can point to other factors that made the “Jumpstart Seattle” measure that passed last month difficult to fight, from the different structure of the tax to the threat of a grassroots “Tax Amazon” ballot initiative.

The bottom line, I think, is this: Amazon and the business lobby groups that opposed the tax — notably, the Downtown Seattle Association and the Seattle Metropolitan Chamber of Commerce — didn’t bet the ranch this round because they knew they held a losing hand.

So much for fighting back. How about running away? On July 8, two days after the Seattle City Council passed the tax ordinance, a piece published by the Puget Sound Business Journal opined, “[It] wouldn't shock us if Amazon started encouraging more of its executives to up and move their teams to HQ2, or a neighboring city in Washington state.” The Seattle Times Editorial Board warned ominously, “The council should now make a sober assessment of what the city might look like without its largest corporate citizen.” And Windermere Chief Economist Matthew Gardner told KIRO Radio’s Dave Ross, “I think there’s no doubt that we’re going to hear several announcements over the next couple of weeks of some massive expansion by Amazon into Bellevue.”

Economists should in general refrain from making predictions, but confident pronouncements on what will happen two weeks out are especially ill advised; the bell tolls and your words still linger on the wind. It’s been over a month now, with no mass exodus. Quite the contrary. On July 29, The Seattle Times’ Danny Westneat described a rush of money and development into Seattle, despite both pandemic and tax: “Since final passage of the new payroll tax on July 6, Amazon has posted 1,187 new job listings for its Seattle campus, for all manner of scientists, programmers and corporate finance managers.”

But perhaps Mr. Gardner was vindicated last Thursday, when Bloomberg broke the news that Amazon may offer “Seattle-based employees a choice of smaller offices outside the city”? Amazon has so far declined to comment, but Bloomberg’s anonymous source, who pointed to the tax as a factor, was quickly counterbalanced by The Seattle Times’ anonymous source, who downplayed the survey, calling it “routine.” Assuming Amazon follows through, this doesn’t have to mean a shrinking Seattle workforce; in the context of continued regional expansion, moving some employees nearer to their suburban homes could just as easily make way for others to take their place in Seattle. (Remember those 1,187 new job listings?)

Even if Amazon does move toward a distributed network of smaller offices, we should be skeptical of claims — including from the company itself — that taxes are the driving factor. Spurred on by COVID-19 risks and the rapid rise of remote work, large companies from Citigroup Inc. to REI are already going much further than employee surveys in rethinking the wisdom of vast, centralized headquarters.

To add yet another level of intrigue and uncertainty as to Amazon’s actual intentions, last week’s survey and the splashy news coverage may also be a calculated political move. The Downtown Seattle Association, no doubt in close consultation with its largest and most powerful corporate member, promptly sent a letter to Seattle Councilmembers Lorena González and Teresa Mosqueda, as council president and budget chair, respectively, urging them to reconsider the “tax on jobs” in light of the news.

In other words, there’s a good deal of bluff and bluster in the air. Still, assuming this rear-guard action fails and the tax stands, I don’t think we can entirely discount the possibility that Amazon may make moves to trim its bill, or even just to teach Seattle a lesson. Let’s suppose the worst: Later this year, or next year when the tax starts accruing but isn’t yet being collected, Amazon announces that it will shift thousands of employees to Bellevue, Redmond and Tacoma, and locate all new hires outside Seattle. Does that mean the tax was a bad idea?

Not at all. Rather, for advocates of progressive tax reform, this merely defines the next fight: to extend this tax throughout King County or the state, so that Amazon can’t escape. We may have some unlikely allies, too, since other large Seattle corporations that can’t so easily shift jobs around will benefit from leveling the regional playing field. What if Amazon announces a shift to Crystal City or elsewhere? Then we’d better team up with our counterparts in that city and help them mount the same fight. Good thing a new national coalition called Athena launched last year to help make such coordination possible. (Disclosure: The organization I work for, the Transit Riders Union, is a member of this coalition and also advocated for a Seattle big business tax.)

For the foreseeable future, the dance between progressive-left movements and mega-corporations like Amazon will be a little like a game of whack-a-mole. They’ll try to pit cities and states against each other, as Amazon did in its 2017-18 HQ2 search; we must organize to make this a race to the top, not a race to the bottom. As the Downtown Seattle Association said in a disappointed email to its followers after Mayor Durkan failed to veto the tax, “Like all public policy debates, the vote earlier this month was just another waypoint, not a finality.” Let’s make sure it’s a waypoint en route to a truly progressive tax system.