Jenny Durkan was supposed to be the competent one, but she’s had two big stumbles. 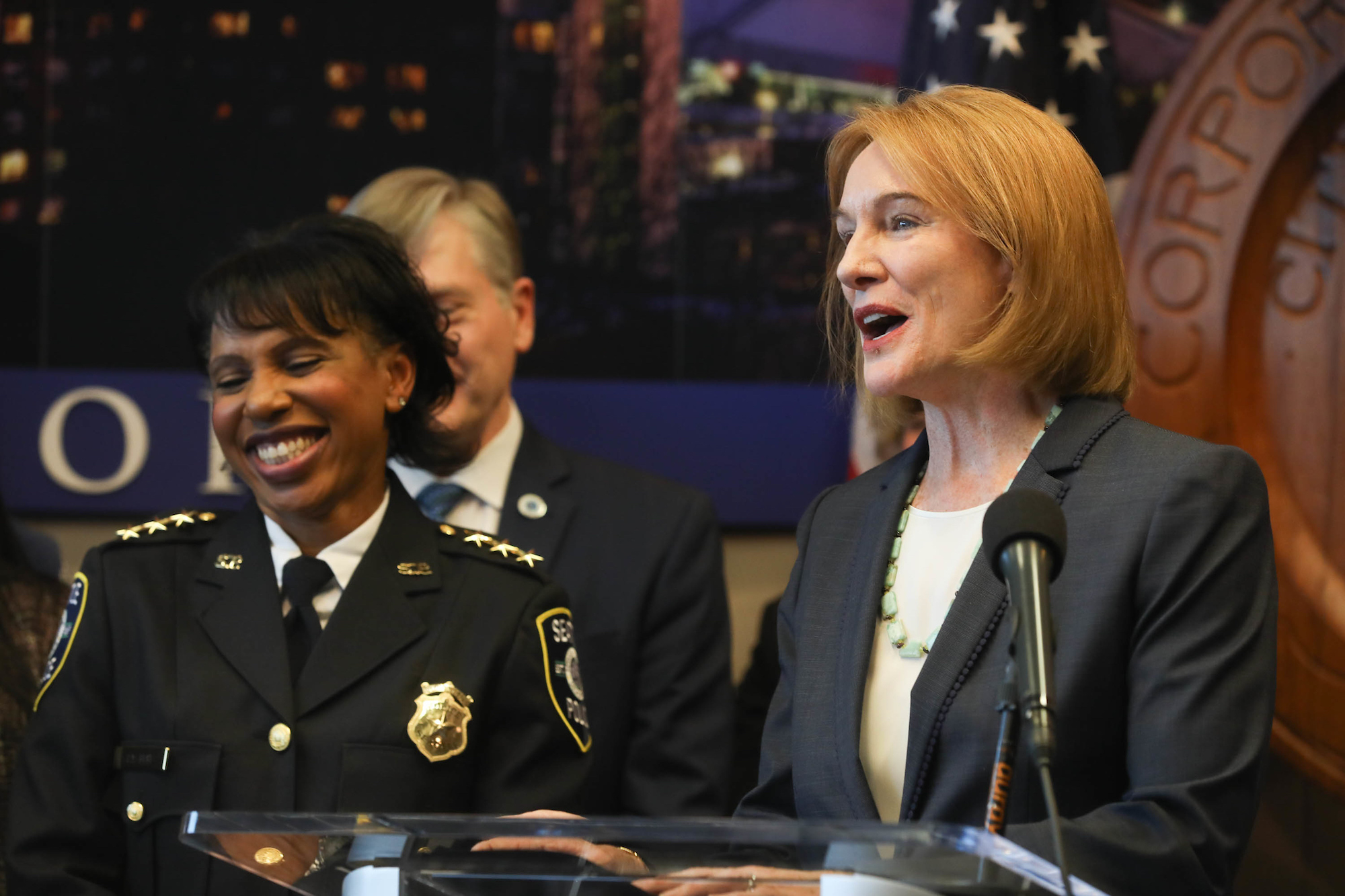 Mayor Jenny Durkan with interim Police Chief Carmen Best at a Dec. 4, 2017 announcement that Kathleen O'Toole was stepping down as chief. (Photo by Matt M. McKnight/Crosscut)

Mayor Jenny Durkan has had a rough start. Being Seattle mayor almost always requires on-the-job training. Former Mayor Norm Rice once joked that it can take a while to learn how to do the job: Mayor Charles Royer, Rice said, figured it out — in the middle of his third term.

Early rough patches are not uncommon, and how mayors navigate them can quickly set a tone. Durkan has had two major consecutive missteps on issues that are central to the city and its future success: the so-called Amazon head tax to finance homelessness programs and the search for a new police chief.

Both reflect poorly on what was supposed to be Durkan’s core appeal: savvy competence.

In the case of the head tax, Durkan negotiated a compromise that was passed by the city council and that she signed into law — a compromise so unpopular that it was certain to be repealed by referendum — and infuriated the city’s business community and largest private employer, Amazon. When public reaction blew up, she negotiated its repeal via a process that may have been in violation of state law, and is now under legal challenge.

Not only did the head-tax debacle enrage folks on both sides of the issue — opponents were furious that it passed in the first place; proponents felt betrayed when the council repealed it — it was a trifecta of failure that also damaged progress and goodwill on the major issue facing the city, homelessness and housing affordability. Instead of inspiring hope, it highlighted haplessness.

The police chief search is another stumble. Interim Seattle Police Chief Carmen Best is popular with the rank and file and reformers, but was left off the list of finalists provided to the mayor in part because Durkan wanted an outsider to run the department, ergo Best was a worst (an insider).

The resulting brouhaha attacked that decision and the process. Why would a qualified, well-liked African American woman be bumped from the finalist list? Why not an insider who has already been part of the reform process and has the confidence of communities central to the very reform mandate?

Durkan’s response to the pushback was to announce over the weekend that one of the finalists has decided to drop out, following a meeting with the mayor. Best is back in the top three, and the finalist who dropped, according to the Seattle Times, did so after talking to the mayor about a job consulting for her on police reform.

This raises questions. If an outsider was wanted, what does it mean that Best is back in the mix? Knowing how popular she is in some quarters, can she really be rejected at this point? Durkan is now faced with either rejecting a candidate that is locally popular, or having a chief that she didn’t really want and a consultant on her staff who will second guess the chief. This for perhaps the most important appointment of her term?

As with the head tax, the mayor seems to be adopting the tactic of flip-flopping when she screws up. On the plus side, majorities might agree with her reversals. But Durkan seems to be cutting deals that are problematic. Amazon was not appeased by the head-tax compromise Durkan came up with and the council passed, and the repeal process was questionable, and the homeless crisis seems as intractable as ever.

The New York Times columnist Tim Egan has called for a new kind of creative urbanism to help cities like Seattle and San Francisco with their affordability messes — but Seattle seems short on creativity and long on second-guessing itself. My hunch is Durkan was not elected as a second-guesser. As a former prosecutor, she was pitched as a pragmatic progressive dealmaker, not an idea person. But a pragmatism of flip-flops when she stumbles is not a model for success.

Still, she seems not to have burned up the hopes of those who elected her. But one can imagine the howls of protest that would be going on had, say, Mike McGinn made these mistakes. Or Cary Moon, if she’d been elected instead of Durkan. Remember the upset over the waterfront tunnel and McGinn’s second-guessing and flip-flopping on that? There was much less tolerance for a progressive/activist mayor’s mistakes than for an establishment figure like Durkan, even though hers are, potentially, much more consequential.

I called the head tax repeal Durkan’s Dunkirk — strategic retreat to fight another day. The Best announcement suggests Durkan’s still employing such tactics to get out of trouble of her own making.