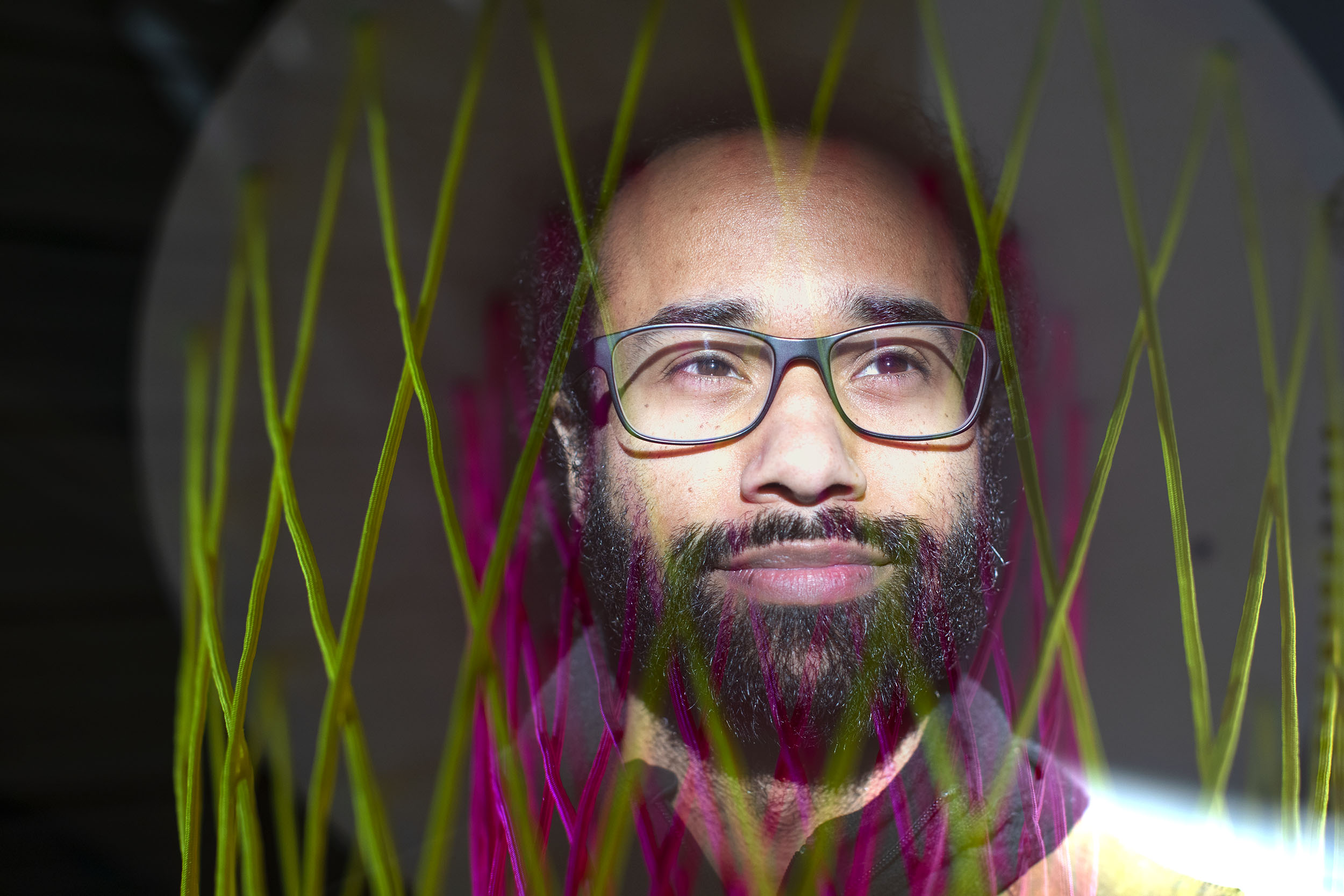 In this in-camera double exposure, artist Henry Jackson-Spieker is photographed at his studio in Seattle’s Rainier Beach neighborhood on Feb. 18, 2020, amid the netlike sculptures he creates with nylon paracord, wood, glass and metal. (Matt M. McKnight/Crosscut)

Anyone who had a Spirograph toy growing up will remember the joy of watching the geometric shapes form on the paper after every orbit of the spinning plastic gears. Henry Jackson-Spieker’s work offers a similar sense of pleasing geometry.

The Seattle artist creates installations out of wood, glass, cast metal and paracord (nylon rope used for outdoor sports, survival kits and military applications). Some look like elaborate basketball nets, others like scientific depictions of a wormhole. Jackson-Spieker calls them “tension sculptures,” but in essence, the pieces don’t stray too far from one of his childhood fascinations.

“They’re basically [Spirographs] but three dimensional,” Jackson-Spieker says, standing in his tightly packed Rainier Beach workspace, which has the vibe of a tinkerer’s garage. “It’s funny, I didn’t have them as a kid, but whenever I saw them I always wanted to play with them.”

Born in Seattle and raised in Mt. Baker, Jackson-Spieker was creative from early on. His childhood love of making things was fostered at the arts nonprofit Coyote Central. At 13, he started taking classes at the Pratt Fine Arts Center, the same place where he now teaches glassblowing and bronze casting. Having received a B.A. from Western Washington University, Jackson-Spieker heads to graduate school this fall. He is one of five candidates accepted into Alfred University's prestigious Sculpture/Dimensional Studies M.F.A. program in New York.

Having recently turned 30, Jackson-Spieker is making a name for himself in the Seattle art scene. He’s received multiple artist grants and fellowships, including the Chihuly Garden and Glass Anniversary Scholarship Award in 2018, and is one of the eight artists chosen to create work for the new Midtown Square development at 23rd and Union. He’s shown work as part of the Seattle Center Sculpture Walk Project, at SOIL Gallery, Wa Na Wari, and in a solo show at Method Gallery. In each setting, his sculptures — with their neon cords anchored into circular wood bases and stretching up to form elongated hyperbolas ­— draw viewers inside to explore the way they create and warp space.

In short, he’s doing what he says he dreamed of as a kid: “I was always wanting to do more and build things with my hands.”

I spent most of my time growing up at the Pratt Fine Arts Center and Bikeworks in Columbia City, working on bikes and making art. I guess I was an art-nerdy kid. I just wanted to learn the craft.

Actually, when I was a little kid, I hated going to art museums for school field trips. I just didn't want to look at it. I thought it was boring and didn't understand it. Now, obviously, I really enjoy it.

What was your aha moment?

It wasn't until college that I was like, “Oh, I'm actually making art.” I think it was when [I asked myself] what’s my major? I knew I liked working with my hands; I thought I could go into engineering, but I wanted to be able to just make what I want. I started combining bronze and glass together. That was kind of the jumping off point, where I really started this idea of tension throughout my work. My work deals with combining conflicting materials, so glass and bronze, wood and glass or metal and paracord, string or wire rope.

You’ve rock climbed on and off since college. How do you think the sport informs your practice?

For me it’s like problem solving; how am I going to climb this one route, and then how do I create this sculpture that I want? It’s pretty helpful [physically]; I use the same muscles for glassblowing and rock climbing. I remember when I was first starting out I would go climb and then try to blow glass and I just could not do it cause my muscles were so sore.

How would you describe Seattle's arts scene?

Whenever you go to an art walk, you're going to see everyone and catch up. I think what has kept me here in Seattle is the fact that it is so tight knit, people end up building each other up. We’re always passing on different opportunities and helping each other out, which has been really nice.

Who are some other local artists you recommend checking out?

See more of his work: hjsculpture.com

What do you think are some of the most pressing issues facing Seattle artists?

Where to find space to make work is always an issue. But, you know, we do have a lot of really good resources: 4Culture, Artist Trust, the Office of Arts and Culture — a lot of places that are really helpful for artists. It would be nice to have further engagement, more outreach in terms of educating the community about the benefits of art and why it is important to have art in schools and access to art.

How do you make a living as an artist in this increasingly expensive city?

The notion of struggling artists — I mean, yes, it’s real. I think what I found is that if I want to make my work, I’m just going to find any way to do it. This is my priority. I’ve been really fortunate in that most of the work that I do outside of my own personal work is with other artists or in the art world. I’ve had a job as an art handler at Artech, I’ve worked for other artists, like [Seattle sculptor] John Grade and [Mexican sculptor] Marela Zacarías. I teach at Pratt Fine Arts Center.

As a lifelong Seattleite, how do you feel about the influx of tech workers?

It's definitely a bittersweet kind of thing. The amount of development that's happening in Seattle — the housing, the gentrification — it's not great. It just seems like the development goes so quickly that it's hard to have a discussion. But the potential for collaboration can be nice. [For example] video artists are starting to work more with augmented reality and teaming up with [traditional] artists. John Grade teamed up with [electronic artist] Reilly Donovan. We were able to work with him and create a walk through of one of Grade’s pieces called “Murmur,” bridging this emerging technology and coupling it with sculptural work so you can get much more of a full sensory immersion and interactive [art experience].

As a child who hated going to art museums, how would you convince a child with similar feelings that your own work isn’t “boring”?

I would ask them to figure out how it’s made. If they don’t like the idea behind it or the concept, try to figure out how it was made, or how they got it into the museum if it's a really large piece. I approach things more as a puzzle, I always try to solve or make it into a game. If I don’t really enjoy something I try to break it down into something that’s more enjoyable. So, from there, hopefully they can get some appreciation for the different facets of the artwork — or the art world as a whole — and how many different skill sets or different people it takes to make one piece. 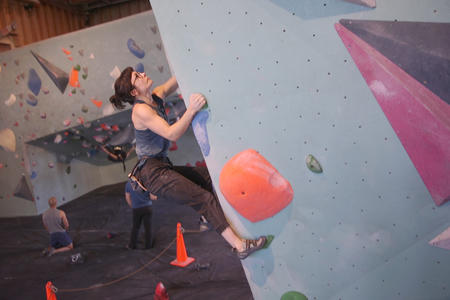