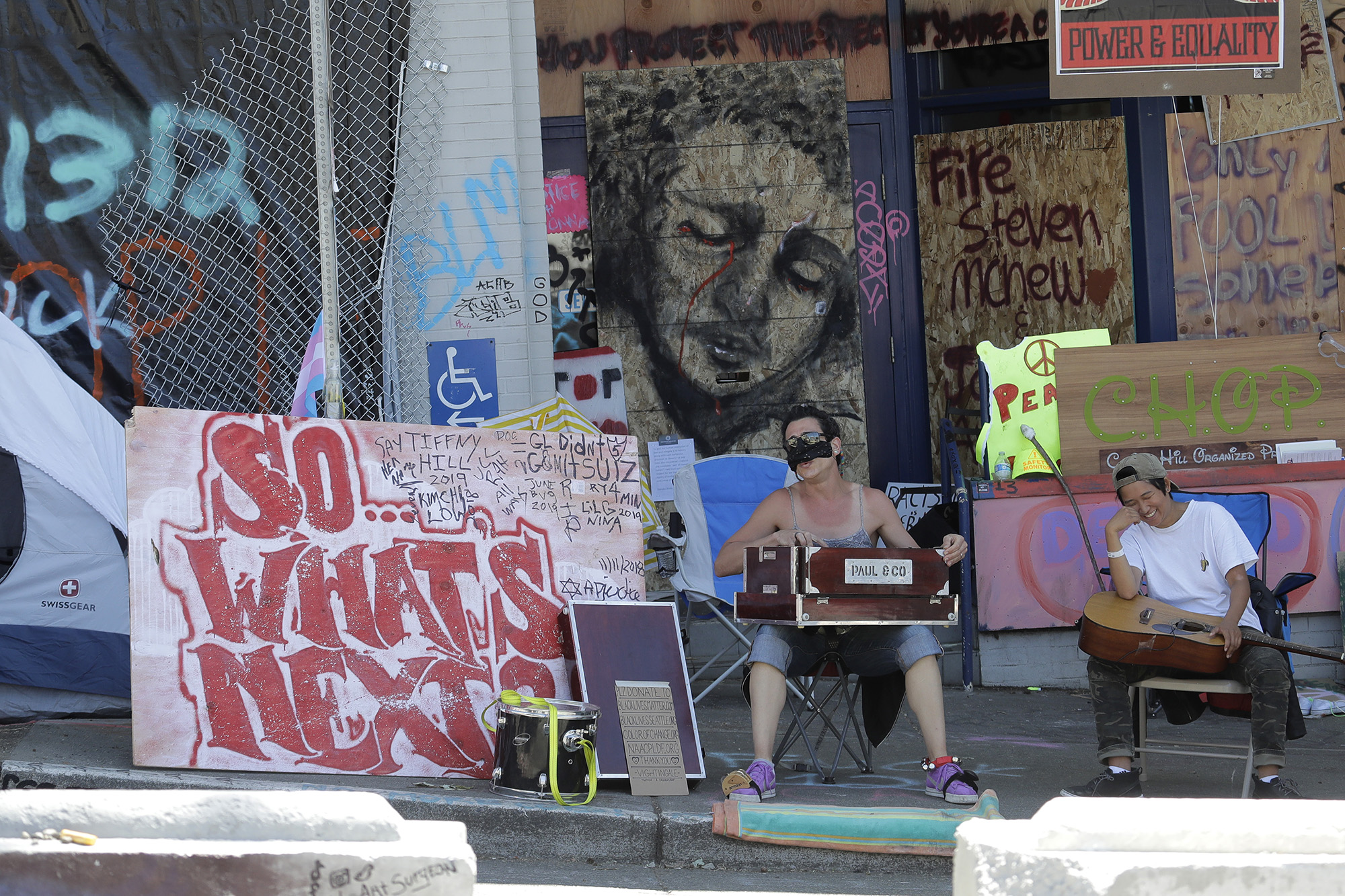 Two people perform music next to a sign in front of the Seattle Police Department's East Precinct building in the CHOP (Capitol Hill Occupied Protest), June 25, 2020. The area was dismantled by the city, citing health and safety concerns. (Ted S. Warren/AP)

Seattle City Hall is like a scene in a disaster movie, one in which the inhabitants of the city have evacuated ahead of an impending threat. The main lobby stands empty, even at midday. The sole person present is a security guard in a corner hidden behind a plastic shield. The bustle of civic life is utterly absent, save for a few sign wavers on the steps outside.

Such are the effects of working from home, furloughs, layoffs and a city that has largely shut down to cope with the coronavirus pandemic. It’s a symbol of how quickly life has changed in booming Seattle. In February, the city was anticipating a busy tourist season, high-rises were rising and the economic picture was enviable, with unemployment about 2.5%. The economic engine of the state was humming. At Mayor Jenny Durkan's state of the city address that month, my colleague David Kroman described her attitude as “fiercely optimistic.”

Then April happened. The unemployment rate slipped in March and spiked to 16% the following month. The graph looks like a billiard ball falling off the table. From boom to bust in a month, worse than the Boeing crash of the early 1970s. This bust isn’t about one company and its ripple effects, and it isn’t over. We’re in the worst global recession since World War II, and it may get worse.

Downtown is still hollowed out with a ghost-of-itself ambience: The Alaska-bound cruise ships won’t be docking in Elliot Bay this year, nor will the conventioneers fill the bars and restaurants, erasing billions from the local economy. In June, downtown hotel revenues were down over 94% with a midmonth occupancy rate of 13%. COVID-19 is still impacting people’s willingness to travel.

Macy’s is closed forever, downtown retailers are opening slowly with the county’s phase-in approach, and many big employers are largely shut or working remotely — some, including Amazon, through the end of the year. The downtown small businesses that rely on those downtown workers now have few customers. The Washington State Convention Center expansion is having financing problems; all but one booked convention has been canceled for the year; and future booking dates are uncertain. The Pike Place Market is seeing only a fraction of its annual 15 million visitors a year and hoping locals come back. The region’s biggest job losses were in two of Seattle’s employment bright spots: hospitality and construction, though unemployment in had declined to 13% by May.

We’re wearing masks and rooting for recovery, but the city is facing an immediate budget crisis, followed by one that might be even worse.

A week ago, I talked with Durkan, who outlined what the city is facing. In the short term: a huge budget shortfall of nearly $400 million in the last half of the 2020 fiscal year. The budget has been hit by huge pandemic-related expenses — about $233 million in social services and business relief spending — and $200 million in lost revenues. Less money is coming in because of less parking revenue, closed parks, loss of income from Seattle Center and some lower than expected tax collections, according to information from the mayor's office.

To balance it by the end of July, Durkan has proposed to fill the gap with expected federal and state relief funds, money from the Federal Emergency Management Agency, budget cuts, reallocated levy monies and spending $29 million of the city's rainy day fund. To get the budget in line quickly is a major undertaking, especially with only half a year to work with. The Seattle City Council has extended the period for budget adjustment and approval to the end of July.

But, in many ways, the situation is likely much more dire. While many people wonder if there will be Husky, Mariner or Seahawk games after Labor Day, or if schools will reopen in the fall, the mayor and the city council will be diving into the 2021 budget. It is not yet clear what will be clear to them by then.

The unknowns of COVID-19 are huge. The national and global economies are struggling; in some areas where the coronavirus was expected to die down for the summer, it is spiking. Seattle numbers have also skyrocketed in the last week, says Durkan’s chief of staff, Stephanie Formas. Durkan’s budget adjustment calls for $38 million more for continued response to the pandemic, including $15 million for June to October of this year.

It’s also not clear when, or if, a vaccine will be available, but we know it's not likely until 2021. Bill Gates says that in the fall COVID-19 could well be worse than he would have predicted a month ago. Consumer confidence ticked up in June, but nearly two-thirds of consumers think things won’t improve much or will get worse in the next six months.

Seattle’s entered this pandemic era with serious preexisting conditions. Chief among them is the homelessness crisis. The coronavirus has exacerbated systemic inequalities that are long-standing. Even in good times our successes have mostly made inequality, affordability and homelessness worse. What will it be like in bad times? All of these problems need to be addressed, but the issue of resources will grow more acute. Durkan, though, is determined to keep the safety net intact.

There are other mounting pressures, including the cry to “defund” the police. The mayor has already proposed a 5% cut (about $20 million over the next six months), with more to come for 2021. But long-term police funding won’t likely be a money saver since “cut” funding would likely be funneled to more social support, community grants and projects for the Black community — and perhaps an alternative department of some kind. Think of the need for massive retraining of the police to demilitarize or hiring more counselors and social workers. Defunding the police asserts a new priority, not necessarily budget savings.

Public patience may soon be strained further. At the end of July, federal funds to boost unemployment payments will end. Unless renewed, that's a huge potential hit for people without jobs. There is no guarantee that new and sufficient federal funds to help with COVID consequences will be there either. Durkan, though, is hopeful that Congress, facing a November election, might pass an infrastructure bill that could fund some city projects to get people back to work.

A city council committee this week approved a new tax plan proposed by Teresa Mosqueda (Jumpstart Seattle) that would boost revenues by taxing payrolls to generate $200 million a year to help with affordable housing, pandemic expenses and assistance for small businesses. Mosqueda's was an alternative to Kshama Sawant's more aggressive Tax Amazon proposal. It might seem risky to tax large employers at a time when the business climate is struggling, but the proposal targets large salaries, not employees. A large budget crisis in a city with big problems, and ambitions, will have to be addressed with new revenues as well as cuts.

Durkan’s opening strategy for 2021 is to draw down rainy day and emergency funds, make "unavoidable" layoffs of city workers, cut baseline spending up to 10%, generate new revenues and make room to factor in ongoing COVID spending, which is estimated to be necessary for years ahead.

Facing it all, Durkan continues to see a huge challenge, but also an opportunity. We won’t be going back anytime soon to the Seattle of February 2020, but would we want to? Can the city use the new reality to reform policing, advance social justice and rethink how it delivers services? The crisis could be seen as a chance to break with old bad habits.

“It’s an unprecedented opportunity for Seattle to remake itself,” Durkan maintains. “We’re going to translate the moment into real change.” She wants the city’s recovery to produce a more equitable system, one long overdue. Many may question her ability to do pull that off, but she says she wants to be open to the potential of the moment. “Our number one job now is to listen,” she says. “If the solutions came from government, so many people would not be in the streets.”

Dwight Eisenhower, the hero of D-Day, said that to solve a problem, you sometimes need to make it bigger, not smaller, to see a path to solutions. For Durkan, the scale of what’s ahead needs no enlarging, but she says she sees that the chance for major change is here. “Look to the future,” she says, “but one that also addresses past wrongs.”

If she and the city council can manage that, this disaster could end on a better note.