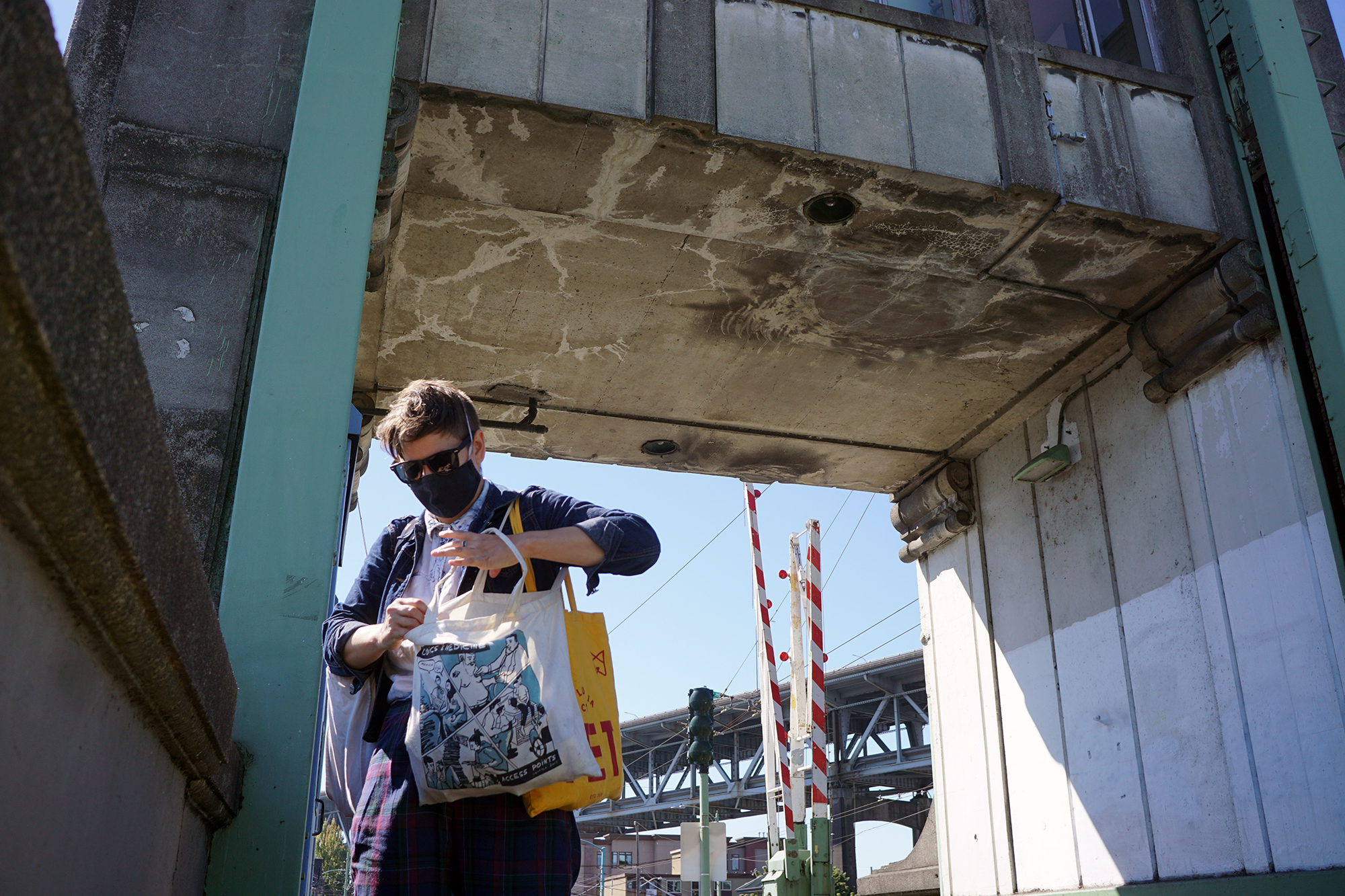 Artist E.T. Russian gets ready to enter their studio space at the University Bridge tower. Russian is one of two Seattle comic illustrators chosen for this year's bridge residency. (Agueda Pacheco Flores/Crosscut)

Seattle is home to more than a hundred bridges, four of which are historic bascule bridges spanning the Lake Washington Ship Canal — the massive earthmoving project that took from 1911 to 1917. Also known as drawbridges, the Montlake, University, Fremont and Ballard crossings are operated by bridgetenders who work in the towers and lift the double leaves to let boats pass underneath.

But starting this month, two empty towers will be occupied by two artists in residence: E.T. Russian at the University Bridge and Roger Fernandes at the Fremont Bridge. Instead of operating the spans, the Seattle artists will be responsible for exploring the history and significance of the bridges, and translating that experience into new artistic work.

“We ask the artists to be inspired by [the bridges],” says Maija McKnight, the Office of Arts and Culture project manager, who is guiding this year’s residency. “They’re on site to see them open and close and to think about the roles bridges play.”

The bridge residency is a joint program of Office of Arts and Culture and the Seattle Department of Transportation. Each resident is awarded three months of studio time in the tower (it is not a residential space) and $10,000. The first resident was muralist Kristen Ramirez, who in 2009 created a voicemail line where people could share memories of the Fremont bridge. She then made the recordings into an audio collage and broadcast it over bridge speakers.

Other past residents include essayist Elissa Washuta, a member of the Cowlitz Indian Tribe, who wrote White City, a collection of prose that explores the manmade cut crossed by the bascule bridges and the struggles of identity in colonized Duwamish land. Local lighting designers Ian Campbell and Hayley Buckbee lit the Fremont Bridge from underneath during their stay, making it glow at night. And last year, composer Paurl Walsh presented Bascule, a public concert of music created during his bridge residency.

This year the residency specifically sought out graphic novelists, and Russian and Fernandes answered the call. Both illustrators grew up in Washington, but they bring vastly different approaches to their work. 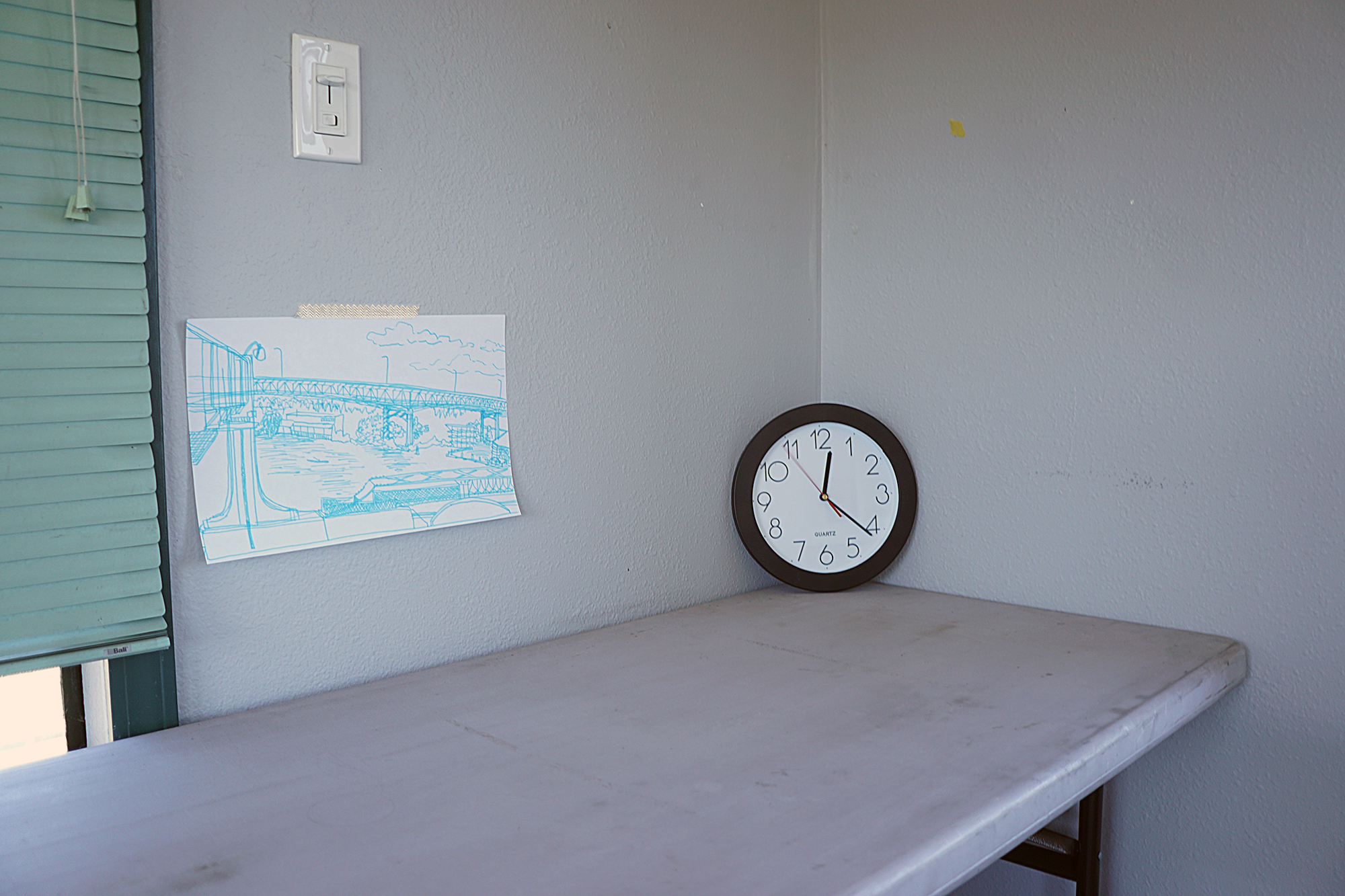 On a recent Sunday, Russian (who uses they/them pronouns) was getting situated at the University Bridge.

Pulling out their keys to the tower, Russian, 42, mentions that the building isn’t compliant with the Americans with Disabilities Act, and begins ascending the narrow red staircase that leads to an 11-by-19-foot room with a 360-degree view of the surrounding water: Portage Bay to the east and Lake Union to the west. The room has a bathroom and seven windows, one with an air conditioning unit. The location is perfect for Russian, who works most of the week at the nearby University of Washington Medical Center as a physical therapist.

“I'm really excited,” Russian says, as cyclists speed by. “The University Bridge is a drawbridge, so it's very dynamic, tons of people walk and run across the bridge every day, plus all the boats going by underneath —” then a boat’s air horn interrupts them.

For now, Russian has started by taping blue-toned sketches of the surrounding environment near the windows facing Interstate 5. The aesthetic is minimalist, with limited color, reminiscent of the zines Russian read when coming up in the Pacific Northwest punk scene. “I’ve been really feeling blue,” they say. (Perhaps accordingly, they’re wearing dark blue flannel pants, an acid-washed jean button-up shirt and a jean jacket.) Using deep watery blues, the sketch outlines the form of I-5's double-decker steel truss bridge that towers in the distance. 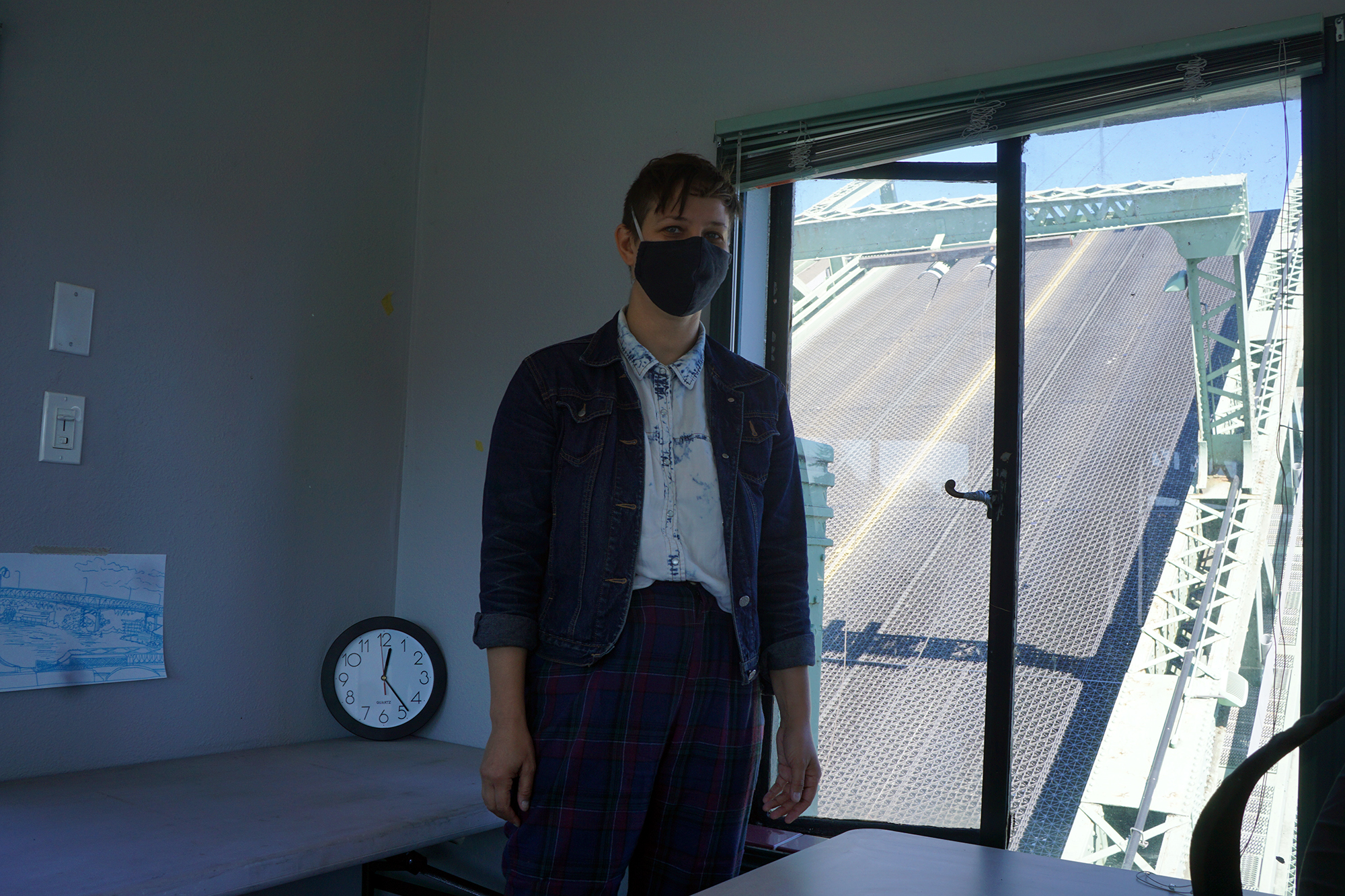 "I've lived my whole life in the Pacific Northwest," says E.T. Russian, as the University Bridge raises. "Evergreens and waterways are featured in almost everything I've ever done." (Agueda Pacheco Flores/Crosscut)

"I've lived my whole life in the Pacific Northwest," says E.T. Russian, as the University Bridge raises. "Evergreens and waterways are featured in almost everything I've ever done." (Agueda Pacheco Flores/Crosscut)

Russian is a self-taught illustrator and video artist whose previous works include The Ring of Fire, a comic anthology; Catch My Air, a zine about disability freedom; and Got Green, a zine about environmental justice. Russian also created an interactive video-comic installation at Seattle University’s Hedreen Gallery.

The latter, Double Clear, explored the questions and fears Russian faced when they lost both legs in an accident at age 18. The installation was meant to be experienced in multiple senses — by people with various abilities and disabilities — and included sounds, poetry written in text and in Braille, a touchable pile of rocks on the floor and projections layered over Russian’s comic illustrations of gargoyles, landscapes and a suspension bridge.

“I think that we’re not often seen as a cultural group,” Russian says. “We’re seen as people who you would pity... individual people with a tragedy. [But] sick and disabled people have languages, traditions and shared cultural experiences.”

Russian’s zines and comics explore disability justice with meticulous intention. Their art is meant to be inclusive, which is why they want their bridge residency project to bring attention to multiple aspects of the structure, including its racial and cultural legacy.

In the context of the Black Lives Matter protests, Russian feels the residency is an opportunity to engage with themes of privilege, racial inequality and the environmental effects of man-made canals. Their plan is to create a series of 15-second animated gifs to post on social media in the hope that people will repost and spread these messages. At the end of the residency all the comics together would tell a whole story.

“I don't know exactly how it's going to manifest,” Russian says. “I want there to be dreamlike components. I envision the drawbridge opening and the clouds come up out of that, and they're in shapes, and then those are animated and they're telling a story that maybe moves across the sky.” 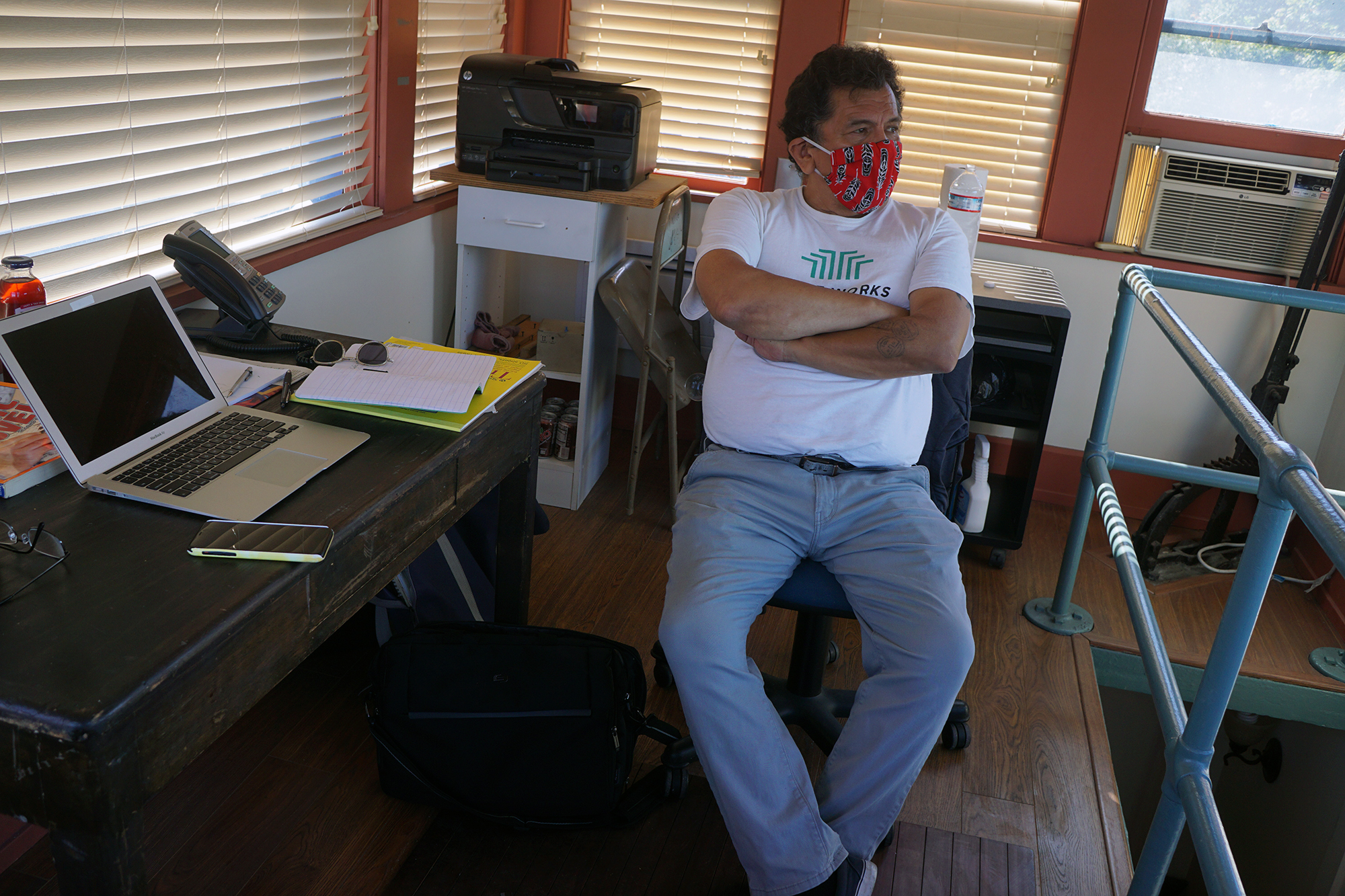 Roger Fernandes is used to the sounds of the city and says the periodic honks and constant shaking at the Fremont Bridge don't faze him. (Agueda Pacheco Flores/Crosscut)

Roger Fernandes is used to the sounds of the city and says the periodic honks and constant shaking at the Fremont Bridge don't faze him. (Agueda Pacheco Flores/Crosscut)

About two miles west along the ship canal, Roger Fernandes is planning his project at the Fremont Bridge tower. The 69-year-old Lower Elwha Klallam Tribe artist has a strong foundation in oral storytelling and has taught courses on Native art and aesthetics at a number of colleges, including University of Washington. In 2015, as part of the legislative act requiring that public schools in Washington teach tribal history, Fernandes partnered with the Office of Superintendent of Public Instruction to produce Since Time Immemorial, a curricular audio series of Native American stories.

He’s also a skilled graphic artist. Fernandes has released two graphic novels: Nettle Girl (2015) and Salmon Boy (2013). The latter is his take on a traditional Native story about a boy who accidentally ends up living with salmon and returns to the human world with wisdom from the ocean.

“My premise was what would happen if one of the salmon people came to live in this world, and what would they learn? What would we teach them?” Fernandes says.

Settling into his temporary new space, Fernandes has noticed he is surrounded by straight lines — from the square 13-by-8-foot studio space to the cluster of buildings outside and even the small channel of water that runs underneath the bridge. To him, these lines are unnatural and represent a Western perspective.

Similarly, where Western culture views time as a straight line, Native cultures see time as a circle, he says. During his residency, Fernandes envisions creating a graphic novel that uses wisdom from Native American stories to reframe the role of technology in the modern world.

“There are phrases that Western culture uses that make total sense to Western culture, but they might not make sense to other cultures,” Fernandes says. “Like ‘we must tame the river’… as though it being a river, the way it is, needs to be fixed or improved.” 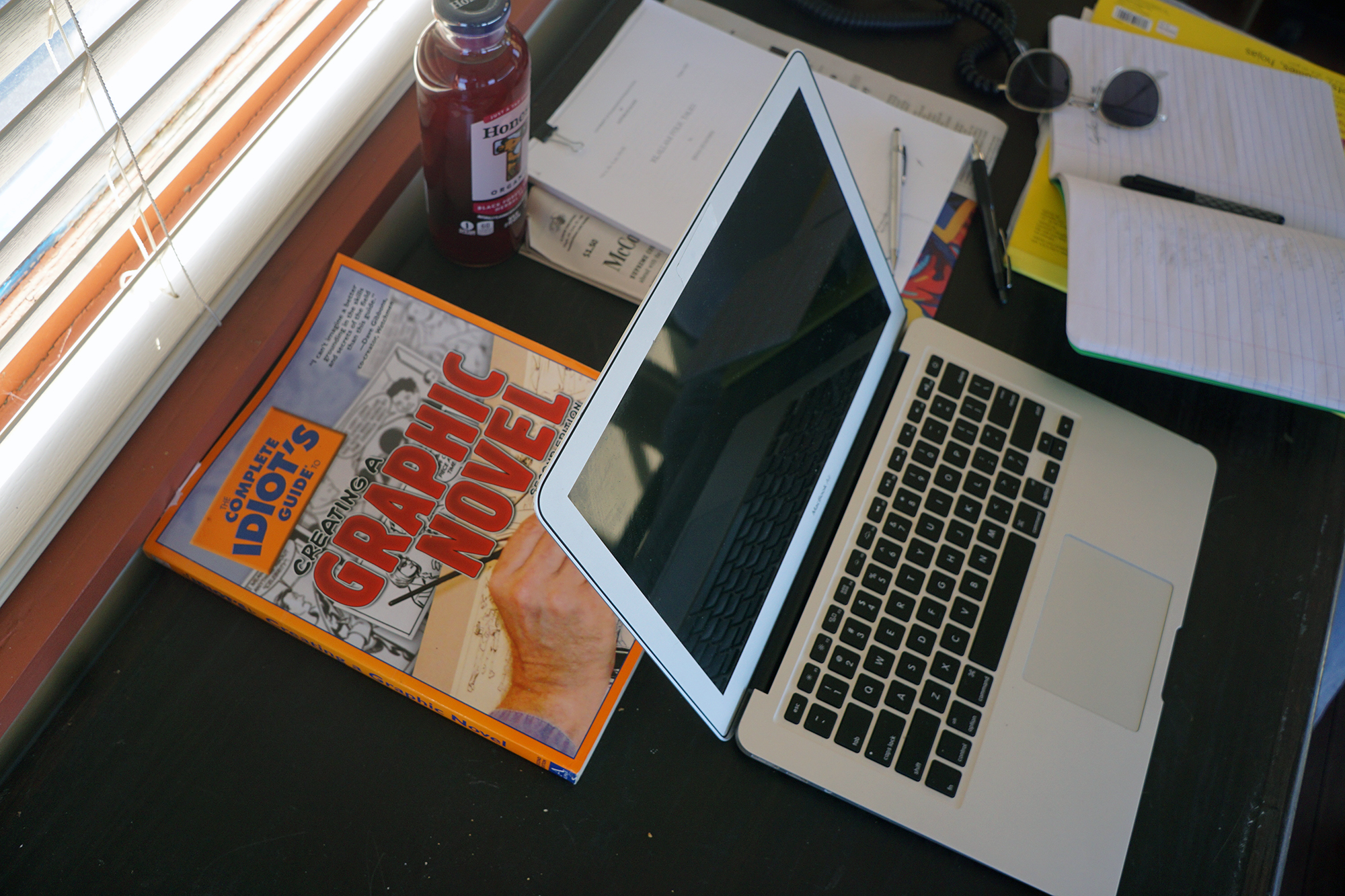 Fernandes channels his artwork from a philosophical starting point and leans into his emotion, something he says he recently learned to do in a poetry class. On his studio desk is a notebook (and a copy of The Complete Idiot’s Guide to Creating a Graphic Novel) containing poems he started writing as an exercise to find the story for this new project. “I don’t consider myself a trained poet,” he says, before hesitantly reading aloud:

The Fremont Bridge was built in 1917 by engineers who wanted to expand the shipping possibilities of the region by cutting a gash in the Earth to connect freshwater lakes to the saltwater sea. For the growing timber industry, it was an economic opportunity. But Fernandes points out that the land was unchanged for many thousands of years before then.

“There was a time when people got across that river right there, that body of water, by either finding a shallow place to ford the river or by canoe,” he says. “They had the capacity to build bridges, but for whatever reason, they chose not to.”