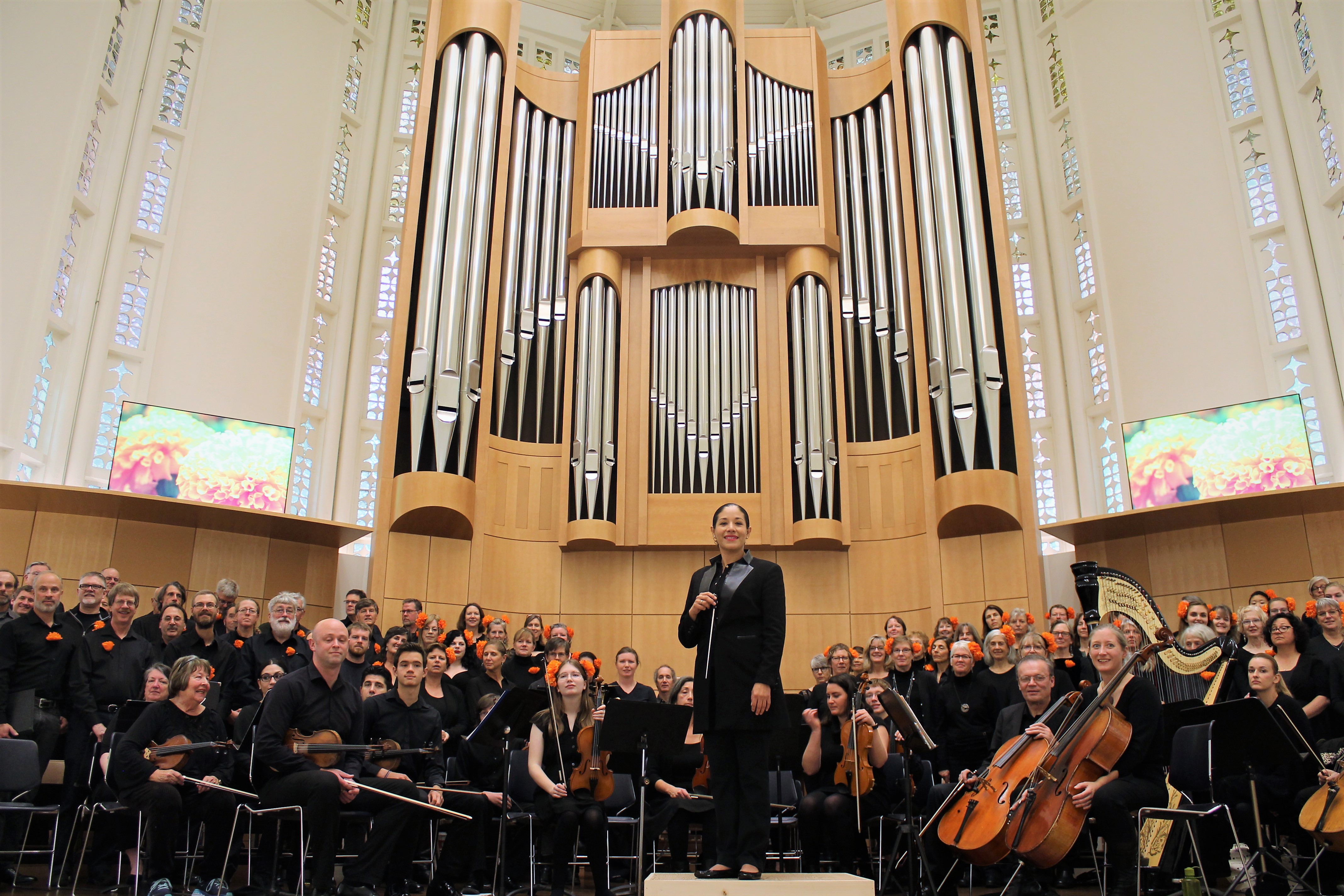 Conductor Paula Nava Madrigal surrounded by the Ballard Civic Orchestra at a 2019 Day of the Dead concert at Plymouth Congregational Church in Seattle. (Diana Cruz)

The rousing score tells the story of Mexico’s cultural mestizaje (mixture) and liberation from Spanish colonizers with a slow build of sweet trumpets, then — viva! — invites you to stomp your feet. Strings stand in for the instruments used in regional coastal music, such as the arpa or guitarra huapanguera, and propel the movement forward like a galloping horse. At the same time, boisterous horns recall powerful, imperial Spain. Instead of clashing as they did during the war for independence, the opposing forces create something new, something fully Mexican.

Conductor Paula Nava Madrigal brings such insights to the “El Grito” (“the shout”) Independence Day concert she has conducted for the past four years. Originally from the city of Guadalajara in Jalisco, Mexico, Madrigal moved to the U.S. in 2014 after studying cello and conducting at the Universidad Autónoma de Guadalajara. Since relocating, she has co-founded a youth orchestra program dedicated to fostering Latinx musicians, established Seattle’s first Latino Chamber Music Festival and also leads Orquesta Northwest, an organization focused on classic music from Latin America.

In the process, she’s disrupting the traditionally white, male discipline of conducting.

As a music director, Madrigal wants to make classical music with Latin roots more accessible to local Latinx audiences. Music is her way of staying connected to her culture, but also fostering that connection for younger Mexicans and Latinx people. “It’s so important for them to have that so they can learn their history, where they come from and feel proud,” she says.

Amid a pandemic that has disproportionately impacted Latinx people, the Mexican maestra has pivoted her music programming to the virtual world. For this year’s Independence Day event, Madrigal has partnered with the Mexican Consulate in Seattle to present a virtual concert (viewable via the consulate’s Facebook page starting Sept. 15, and also on YouTube immediately after). As a safety precaution, the musicians are each recording their parts from home. A producer will mix the audio and video footage together to create the orchestral sound.

Whenever she’s conducting a piece, whether it’s a full orchestra or her husband playing solo violin, Madrigal evokes emotion and history for the audience in real time.

“There's an energy that comes from the orchestra that I’m communicating to the public,” she explains. “It’s like a time machine where I am bringing the past into the present and creating the future.”

Crosscut spoke with Madrigal about being a Latina conductor, the legacy of mestizaje and its musical influence on Mexican composers.

This interview has been translated and edited for length and clarity. 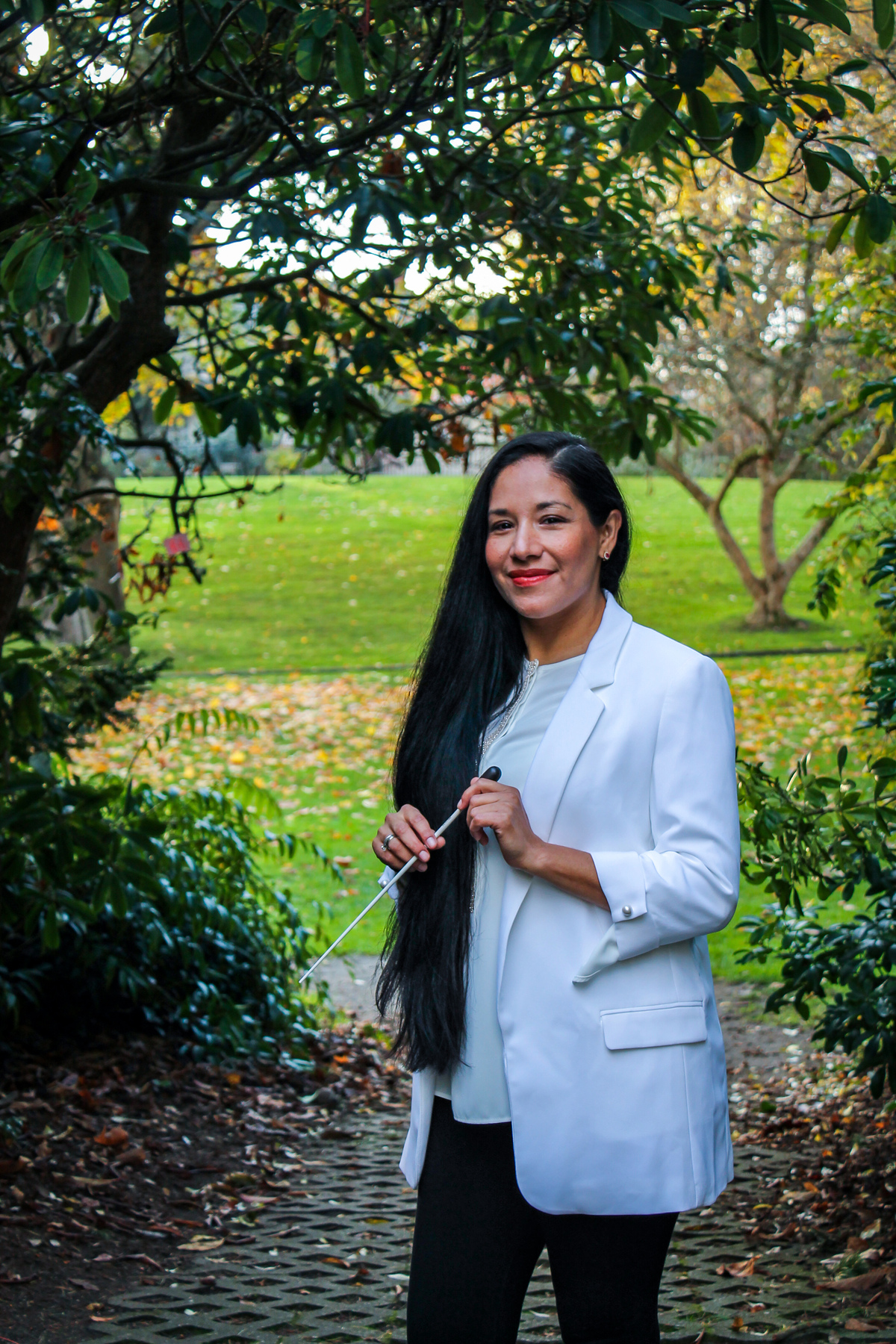 Why did you decide to become a conductor?

Above all else, classical music was influenced by my godfather. I would go play with a friend at his house, and he always had classical music on. When I was a teen, I studied music at a formal school and began to learn about sacred music, choral music, music dedicated to the church. That is where I began to discover the richness. It fills your soul.

There are lots of composers of orchestral music. Many Mexican composers are called nationalists, such as Jose Pablo Moncayo. And Carlos Chavez, who was a huge influence on Aaron Copland, one of the most important composers in the U.S. There are lots of composers who have made symphonic pieces that aren’t known. Even during Baroque times. Orchestra music arrived in Mexico before it even arrived in the U.S. But people don’t know that.

How did that happen?

All the Spanish that arrived to the American continent arrived before the British landed in North America. So the people who came came with music. The Spanish priests indoctrinated Indigenous people with religion and music. This past December we did a Christmas concert and played an orchestral arrangement from a Mexican piece that takes inspiration from a slave song, because there were slaves in Mexico, too.

What sets orchestral music from Mexico apart from the dominant European classical music?

It brings in other traditional music, like mariachi, to make orchestral works. For example, Huapango is a very well known piece by Moncayo. He is from Jalisco, but he went to Veracruz and heard fandango [a music style originally from 1700s Spain] and Veracruz’s regional music [derived from fandango] and developed those themes, which can be heard in the symphonic piece.

You were born in Guadalajara, which is also where Jose Pablo Moncayo, one of Mexico’s most prominent composers, was born as well, right?

¡Si señor! A lot of important artists are from Jalisco: Jose Pablo Moncayo, Blas Galindo and Consuelito Velázquez, who composed “Besame Mucho” [the hugely popular bolero song]. I am very proud to also be from Jalisco.

Which of Moncayo’s songs resonate most with you?

Moncayo has a beautiful piece called Tierra de Temporal [Temporary Land]. It’s almost like I’m listening to the sounds of Zacoalco, my mother’s town. It reminds me of my family. Above everything, Tierra de Temporal is the sound of the land from which I come from.

The piece describes something that has been happening for a long time between Mexico and the U.S. What do people who work the lands do? They work in seasons. When it rains they plant. But in Jalisco, when the rain season is over, what happens? They go to California. Tierra de Temporal, to me, speaks to that story of how when it's time to sow, farmers are in Jalisco, but when it isn’t, they’re working in California.

The U.S. has been your home for six years now. What do you think?

I do see [the U.S.] differently than when I lived in Mexico. I thought all the people in the U.S. were blonde with blue eyes, and when I relocated I realized there were people of all kinds of races, colors, not everyone is rich, there’s different classes. I think that is the United States' strengths.

How does the diversity you discovered in the U.S. compare to the population in Mexico?

In Mexico it’s more common for people to be mixed. For example, in Mexico the majority [population] is a result of the Indigenous people, Europeans and [African] slaves. All of them mixed to make one race. So that’s beautiful, too. All countries and cultures are different and that’s OK. One doesn’t have to be better than the other. They’re just different and that’s good, and the beauty is in appreciating the differences in each one.

Why is “el mestizaje” — the mixing — so important to Mexican identity?

How is your Mexicanidad or Latinidad reflected in your conducting?

I believe because we’re Latino, we are very expressive. We talk with a lot of gesticulation, moving our hands. We aren’t afraid of expressing our emotions. I bring that when I’m directing. Also with the repertoire I choose.

What’s your experience been as a woman of color in the classical conducting world?

Does the white, male conductor stereotype exist in Mexico as well as the U.S.?

In both countries there is this figure of the dominant, macho man. It’s all over the world, you can’t deny it. But here [in the U.S.] on top of the macho man complex is also the color thing, which means double the prejudice.

So for this year’s Independence Day, what are you going to play?

We're going to do “Ay, Jalisco No Te Rajes” with Ballard Civic Orchestra and Mariachi Guadalajara. [All musicians will play separately, with the parts stitched together digitally.] We want to send a message to everybody: no te rajes, don’t give up. Keep fighting and stay happy and stay positive. And for those who aren’t Mexican, it’s a chance for people to get to know us and a bit of our history.

What should people know about Mexican Independence Day?

An important note: Cinco de Mayo is not our Independence Day. That day was the Battle of Puebla, when Mexicans fought against the French. There is a beautiful phrase that Gen. Zarazoga said at that time. He wrote a letter to President Juarez and said, “They may have the best armies of the world, but we are Mexico’s best children.” It would be cool if we all felt that way, even if we don’t live in Mexico anymore, to feel proud and try to be Mexico’s best children.

September is Hispanic Heritage Month in the U.S. and marks independence day for many Latin American countries that were formerly under Spanish colonial rule, including Mexico, Costa Rica, Guatemala, Honduras, Nicaragua and Chile. The “El Grito” Independence Day concert is part of a monthlong lineup of events planned by the Mexican Consulate (in collaboration with other groups), including: