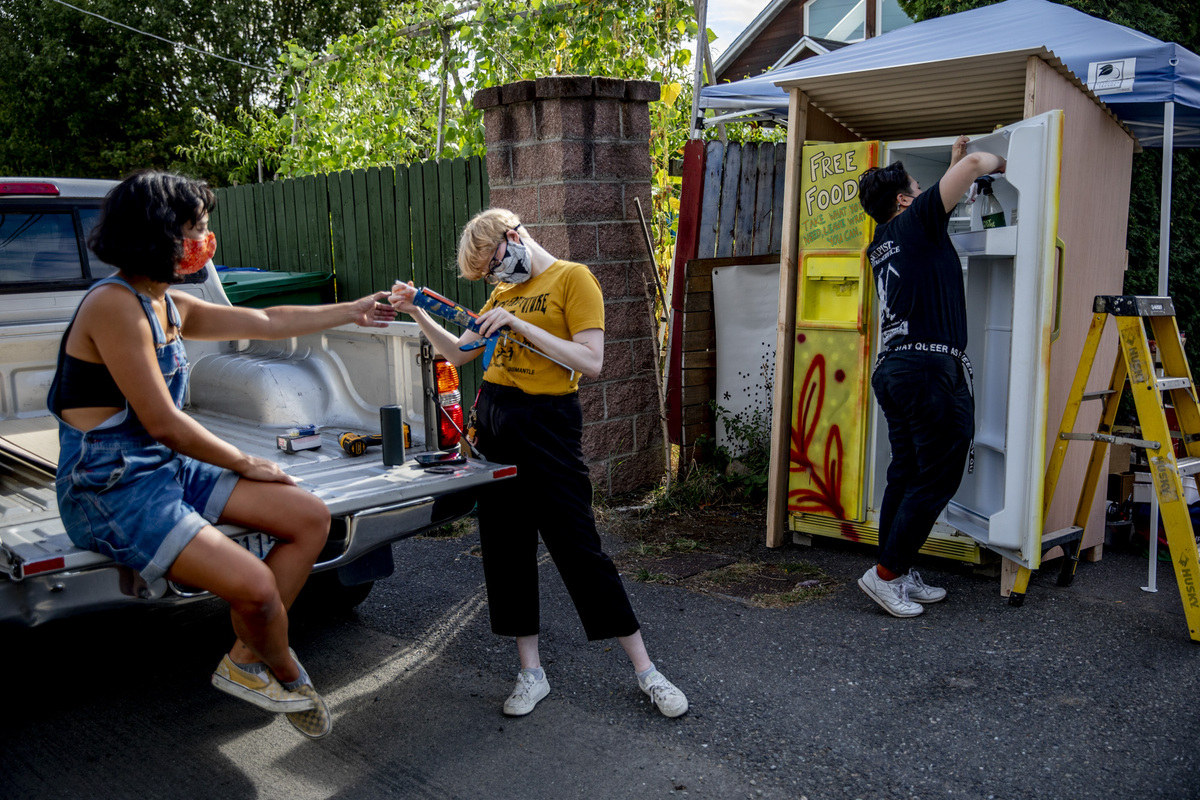 Rewinding the film of 2020, it can seem like a lifetime of events transpired in a 365-day span. A pandemic. An economic crisis. Some of the largest protests the U.S. has ever seen. A historic election. Many people are lonelier, hungrier and poorer than ever. But despite the social distance and devastation — and because of it — people also came together.

When cities locked down this past spring, neighbors took it upon themselves to deliver groceries and medication to the elderly and immunocompromised. Parents formed ad hoc child care support groups. Organizers stocked networks of fridges and pantries with free food and distributed hand sanitizer. Social media users Venmo’d and Cash Apped funds to those struggling to pay rent and medical bills.

In June, at the Seattle protests against police brutality and systemic racism, volunteers handed out water, warm food, masks and even massages. A few weeks later, during the West Coast wildfires, mutual aid groups and volunteers handed out water and offered food to firefighters and those affected by the fires. Others offered their trailers and trucks to help relocate livestock, pets and possessions.

Although it might not have been labeled as such, instances of “mutual aid” were everywhere.

“It’s been a pivotal year for mutual aid,” says Seattle lawyer and trans activist Dean Spade, who has long studied the concept. This past fall, in response to the proliferation of mutual aid during the pandemic, he published the book Mutual Aid: Building Solidarity During This Crisis (and the Next).

A system of pooling together resources and providing supplies, food and organizing powers in response to a crisis, mutual aid has long been practiced by marginalized communities as a survival mechanism and tool for social change. Examples include Black Panther Party survival programs like free breakfasts, clinics and ambulances, the ride-share system set up during the Montgomery bus boycott and, more recently, nonofficial disaster relief in the wake of devastating hurricanes like Sandy and Katrina and other natural disasters.

"During the COVID-19 pandemic, mutual aid groups have proliferated, and more people are learning how to organize mutual aid than have in decades,” Spade writes in the book.

“We sometimes see mutual aid a little bit discussed when there's a big fire or a hurricane,” Spade says during a recent interview. “COVID is a disaster that hit the entire world at the same time.” 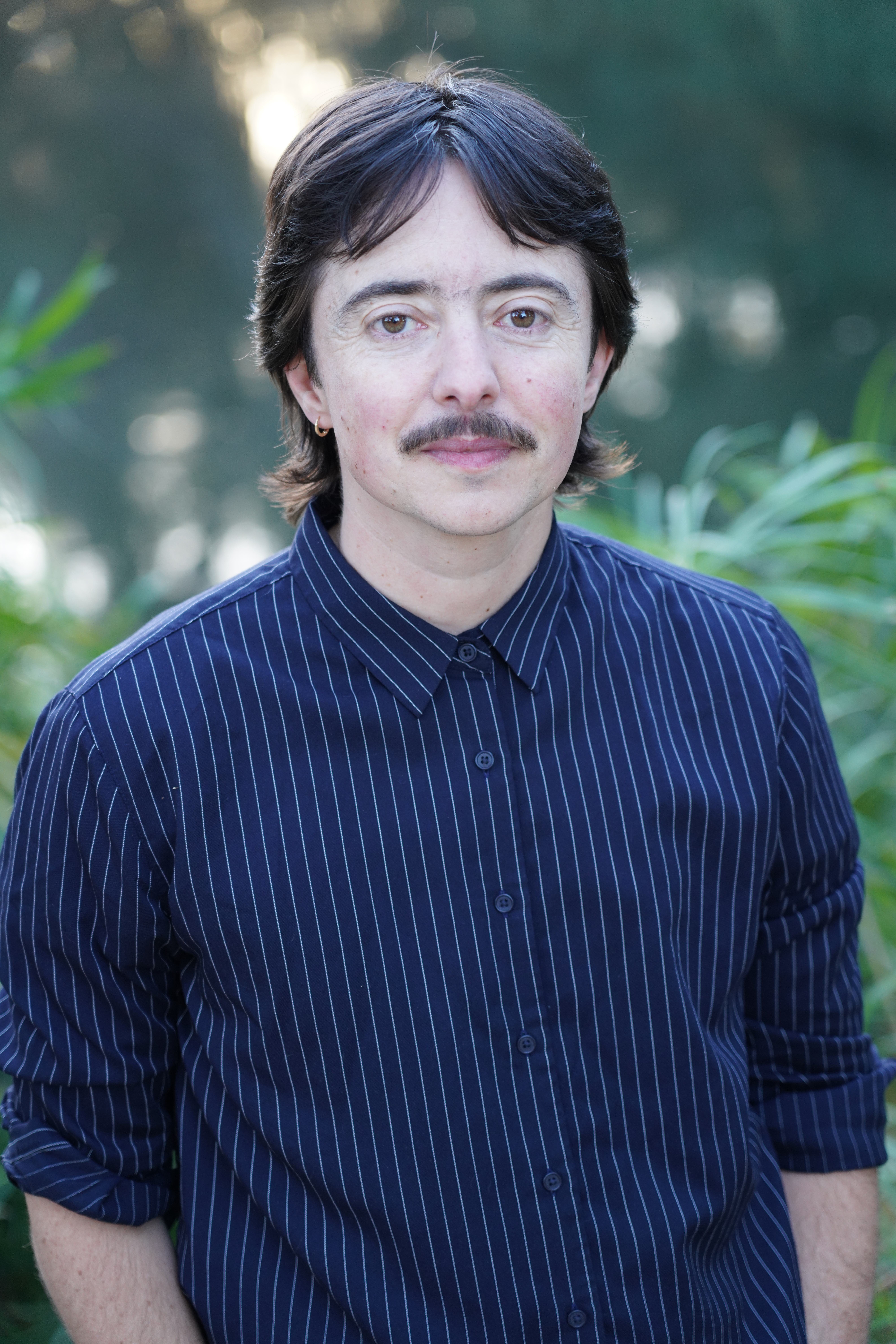 The year 2020 was pivotal for mutual aid — and for Dean Spade, author of the book “Mutual Aid: Building Solidarity During This Crisis (and the Next).” (Johanna Breiding)

The year 2020 was pivotal for mutual aid — and for Dean Spade, author of the book “Mutual Aid: Building Solidarity During This Crisis (and the Next).” (Johanna Breiding)

It’s also been a pivotal year for Spade, an associate professor at Seattle University School of Law, where he teaches administrative, gender and poverty law and the subjects of policing and imprisonment.

“For some people, the pandemic meant things came to a stop, but for me it was the reverse,” Spade says.

Suddenly, Google searches for topics he had studied, taught and organized around for years — mutual aid and prison abolition — spiked as people became curious and engaged during the pandemic and the Black Lives Matter protests.

After pivoting to online teaching, he contributed to the launch of a Mutual Aid 101 toolkit, compiled by U.S. Rep. Alexandria Ocasio-Cortez, D-New York, and writer Mariame Kaba, and helped produce a mutual aid video explainer. He also advised the rapidly growing number of local and national mutual aid groups (such as for people in immigration detention, unhoused people, survivors of domestic violence) in how to set up or streamline internal processes.

Now, while grading papers and prepping next semester’s coursework, he’s on somewhat of a virtual media tour for Mutual Aid. (He’ll be in conversation with Nikkita Oliver on Jan. 26 and appear on Getting Curious With Jonathan Van Ness early this year) The book reads as part “mutual aid for dummies,” with advice on how to run groups, and part political manifesto, arguing for wealth redistribution and resistance to the capitalist status quo.

The “political” aspect is important, Spade says. Mutual aid, he argues, is not just a way to describe “neighbors helping neighbors.” It’s also, he says, a critique. As he writes in the book: “Mutual aid exposes the failure of the current system and shows an alternative.”

The concept is as much defined by what it is as by what it’s not: charity (evidenced by mutual aid’s unofficial slogan: “solidarity, not charity”); volunteerism as a hobby; nonprofits giving out grants; government relief.

With mutual aid, Spade argues, there are no requirements, there’s no unequal application (such as when Black business owners had a harder time getting federal aid last year, he says). Everyone is deserving of care.

“Mutual aid doesn't rely on moralizing eligibility criteria,” Spade explains during our interview. “It says everybody should have what they need. We're not gonna try to figure out if you're the ‘deserving’ or ‘undeserving’ poor. Mutual aid doesn’t look at people who are struggling and say: ‘What’s wrong with you?’ or: ‘How did you end up here?’ ‘Are you homeless? You need to go through our budgeting program, or you need to take parenting classes or take these pills we think you should take.’ ” 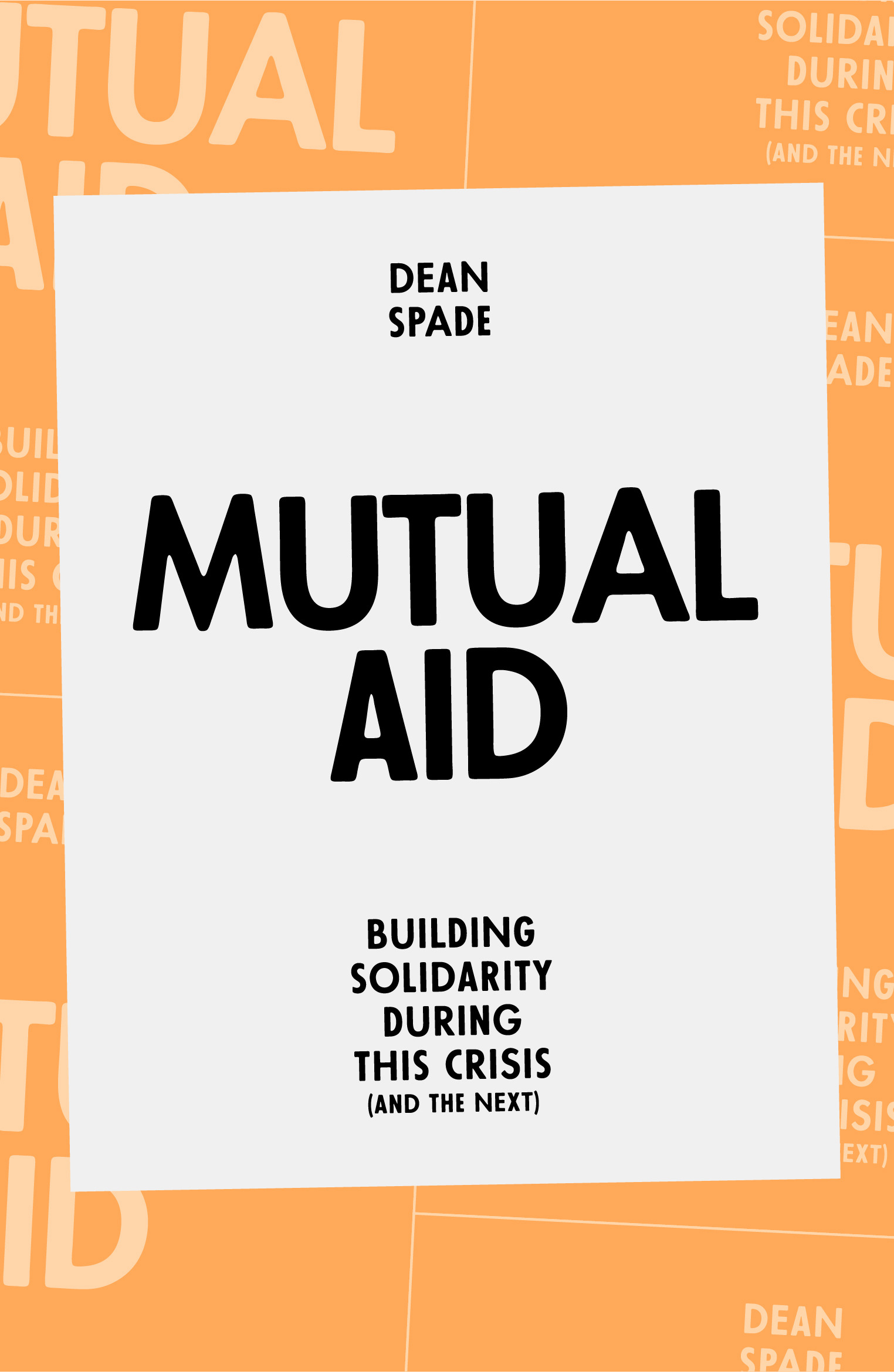 Last fall, in response to the proliferation of mutual aid during the pandemic, Dean Spade published “Mutual Aid: Building Solidarity During This Crisis (and the Next).” (Verso)

Last fall, in response to the proliferation of mutual aid during the pandemic, Dean Spade published “Mutual Aid: Building Solidarity During This Crisis (and the Next).” (Verso)

Having grown up poor and on welfare in the rural South and central Virginia, Spade says he learned at a very young age that social service and welfare programs in the U.S. are unfair, stigmatizing and inadequate.

“I remember how hard it was that we couldn't use our food stamps to buy things our household needed, like shampoo or tampons,” he says. “I was cleaning houses and offices with my mom and sister starting at age 10; meanwhile, politicians like Ronald Reagan were portraying people on welfare as living large and being lazy.’”

Spade went on to study political science and women’s studies at Barnard College and later earned a law degree at UCLA School of Law. But his knowledge about mutual aid was not acquired in college auditoriums or syllabuses. His political awakening during that time happened by way of the activist groups pushing back against Rudy Giuliani’s mayoral administration. Spade joined them in fighting for more spaces for queer and trans youth, supporting people with HIV and AIDS and protesting the criminalization of sex work and transgender people.

At 24, in mid-1990s New York, Spade experienced the latter first-hand: police arrested him in Grand Central Station for using a men's bathroom. “It was a very scary experience, I was in jail overnight and experienced horrible transphobia from the court-appointed attorney who was sent to talk to me in jail,” Spade says. His friends tapped in to their activist networks to find a supportive lawyer at his hearings and rallied people to call city council members and the prosecutor’s office to push for the charges to be dropped (they eventually were).

The episode crystallized the potential of mutual aid for Spade. He knew he was, by far, not the only trans or gender nonconforming person who had gone through a similar ordeal. With that knowledge in mind and fresh out of law school, Spade founded the Sylvia Rivera Law Project, a law collective named after the civil rights pioneer and veteran of the 1969 Stonewall uprising. The project offered free legal help to trans and gender-noncoforming people who are low income or people of color.

Spade moved on from the organization (which still operates as a cooperatively run nonprofit) to complete teaching and law fellowships at Harvard, UCLA and CUNY School of Law, and in 2008, took the job at Seattle University — just in time to witness another historic protest a stone’s throw from his Capitol Hill apartment: Occupy Seattle. 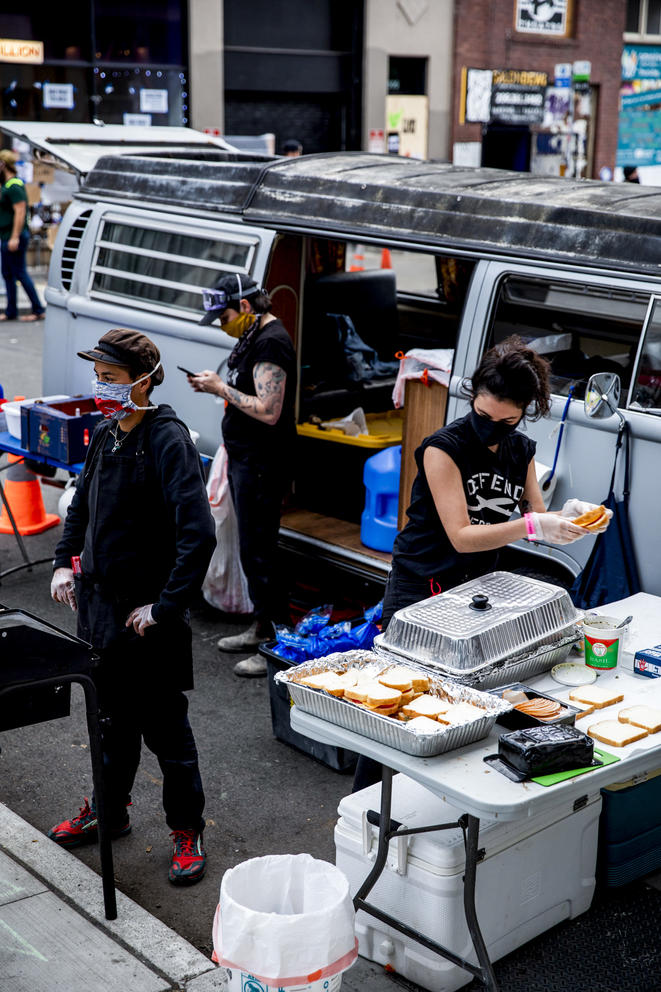 A group of friends makes grilled cheese sandwiches for activists during this past summer's Black Lives Matter protests on Capitol Hill, one of many forms of mutual aid that helped sustain the demonstrations. (Dorothy Edwards/Crosscut)

A group of friends makes grilled cheese sandwiches for activists during this past summer's Black Lives Matter protests on Capitol Hill, one of many forms of mutual aid that helped sustain the demonstrations. (Dorothy Edwards/Crosscut)

This summer and fall, as he walked through the Capitol Hill Organized Protest area and saw the tents first serving protesters and later the neighborhood’s homeless population near Cal Anderson Park, Spade was reminded of the Occupy movement and how, he says, “mutual aid is the architecture of any occupation” — and a blueprint for social change.

“More and more people are disillusioned with the idea that if we just vote for the right person, we'll find our way out of this,” he says. “Or if we just give to the right nonprofit, we'll fund our way out of this. I think people feel concerned and desperate enough to plug in to direct work, to support each other and to try to change the systems that are producing these crises.”

With COVID-19 long from over, climate change accelerating and a deepening economic and housing crisis, Spade says, mutual aid will become even more necessary in 2021 and beyond. Whether it’s the next wildfire or hurricane, or food shortages resulting from climate change, or more racial injustice and police violence, expanding on the current mutual aid “momentum” will be crucial, he argues.

But facing these challenges is not necessarily demoralizing, Spade says.

“[Writer and activist] Mariame Kaba says that hope is a practice. I think that’s really true,” he says. “What we have to be practicing is building the world we want to live in and being with other people in new ways that aren't about greed and competition and fear, but instead are about care and and generosity and connection. That makes life so much more worth living.” 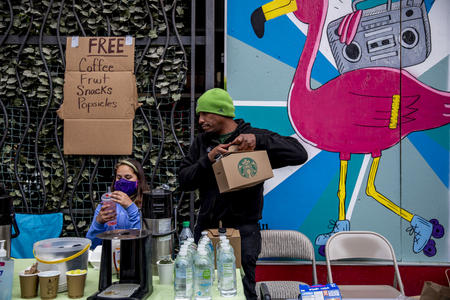