ArtSEA: The state of the arts at Climate Pledge Arena

New installations by Northwest artists enliven the Seattle Center grounds, and hearken back to a World’s Fair vision of the future. 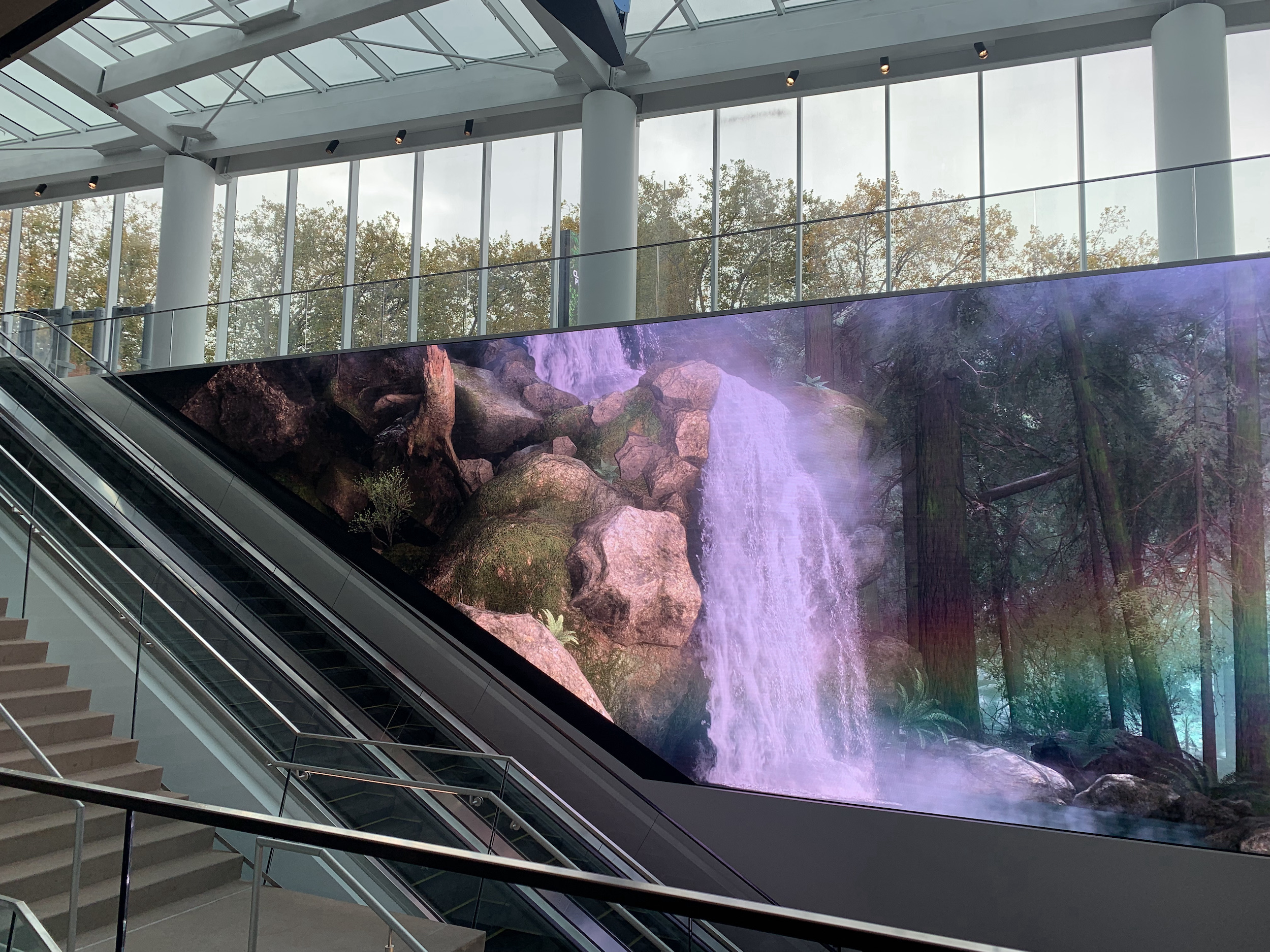 When Seattle World’s Fair visitors entered the brand new Washington State Coliseum in 1962, they were treated to a “World of Tomorrow” exhibit promising a tour of the future in Century 21. Here in 2021, the building is making another debut — as Climate Pledge Arena — and promising a new future, one filled with Storm and Kraken sports action, state-of-the-art rock concerts... and trees.

That’s one of the first things you notice walking into the new atrium of the $1.1 billion remodeled arena, as I did on a press tour yesterday: huge LED screens showing misty forests of evergreens, their branches gently shifting in the CGI breeze. (A spokesperson told me the videos can also show undersea scenes, with a meandering scuba diver.)

The screens are meant to reflect the “climate pledge” in the awkward name — to remind us that this is the first carbon-neutral arena in the world, one that boasts solar panels, electric Zambonis, an enormous living wall of plants and compostable cutlery.

Elsewhere on the arena walls are several large pieces, including a surreal landscape painting by Seattle artist Aramis O. Hamer, featuring waterfalls, tentacles and a goddess figure (in the Symetra lounge), a nifty screen with shifting metal scales that will generate different moving images when the Kraken score, and a cool “lenticular” image (displayed across vertical slats) of the Seattle skyline that changes as you walk down the long hall toward the Kraken locker rooms.

But most of the commissioned artworks are outdoors, located around “the Pledge” plaza and visible even if you don’t have a ticket to get inside. These pieces join Seattle Center’s array of public art installations, some of which have been on the grounds since the World’s Fair. I spied new “Art Tour” information boxes — listing 50 works — being installed near the International Fountain when I visited, but the QR-coded maps weren’t quite ready for prime time. 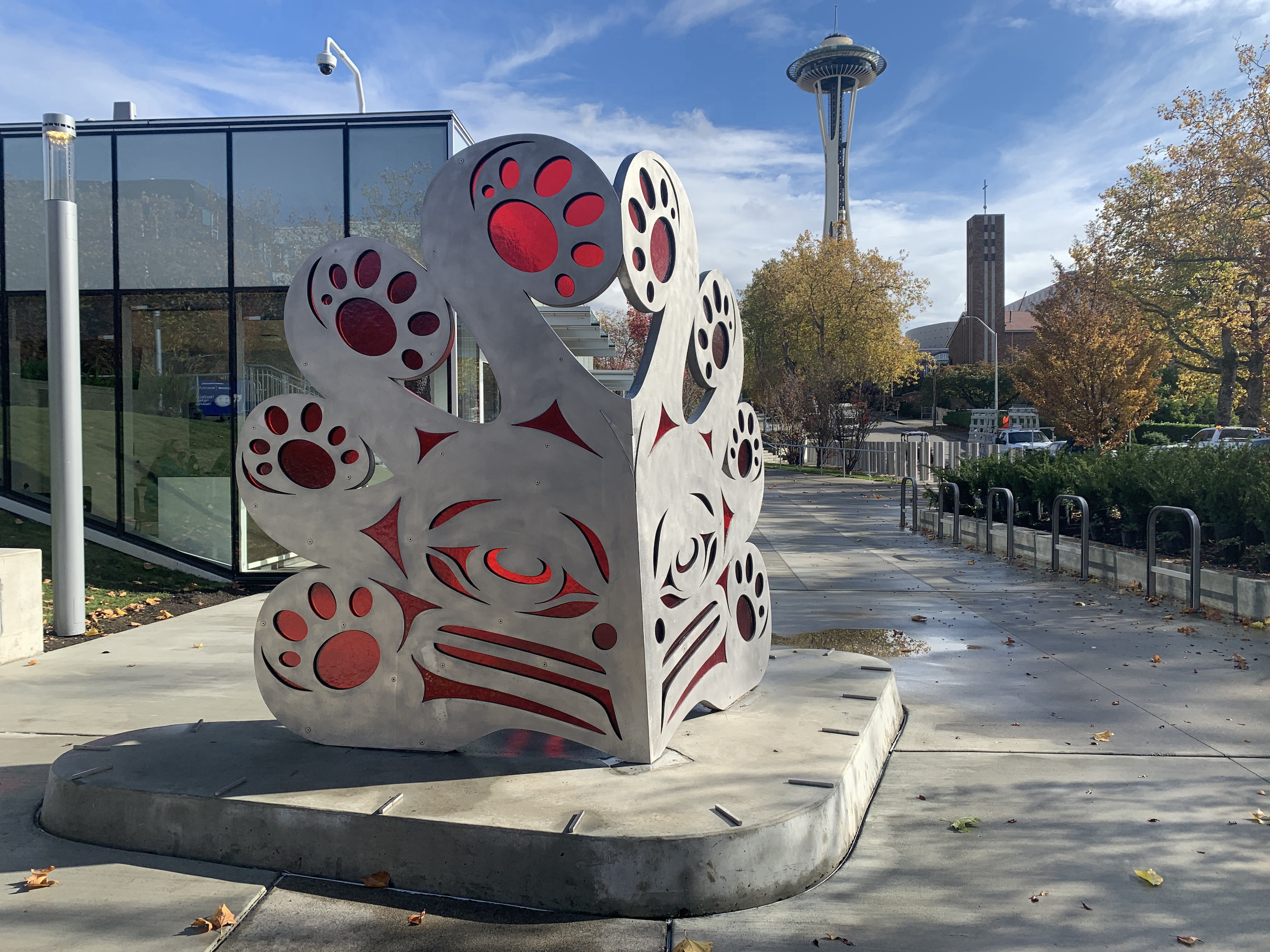 The arena artwork with perhaps the most obvious connection to the new home of the Kraken is “La Diab Pish,” by prominent Northwest glass artist Preston Singletary and sculptor David Franklin. Made of laminated red glass and stainless steel, the symmetrical, eight-armed piece depicts a Pacific giant octopus in a “pan-coastal” Native style, a nod to Singletary’s Tlingit heritage. The creature was in top form when I saw it, with the sun casting a red glow against the concrete. It’s part of the city’s recent surge of public artworks created by Indigenous artists, which Crosscut reporter Margo Vansynghel recently explored.

Nearby is “Chikara no Hikari,” or Light of Power, a sparkling glass-mosaic mural in deep blues and bright yellows, which captures an explosive moment. Seattle artist Norie Sato says the piece is an abstracted idea of particle collisions and atomic movement — meant to convey the energy of people converging for sport and music and motion.

It offers a lovely resonance with Paul Horiuchi’s “Seattle Mural,” the 60-foot-long multicolored glass mosaic that has served as the lively backdrop for bands playing the Mural Amphitheater since the World’s Fair concerts. In addition to the technique the artists used, both murals share a sense of something larger than humanity — in Horiuchi’s, the natural beauty of the Northwest; in Sato’s, the unseen forces that propel us forward. 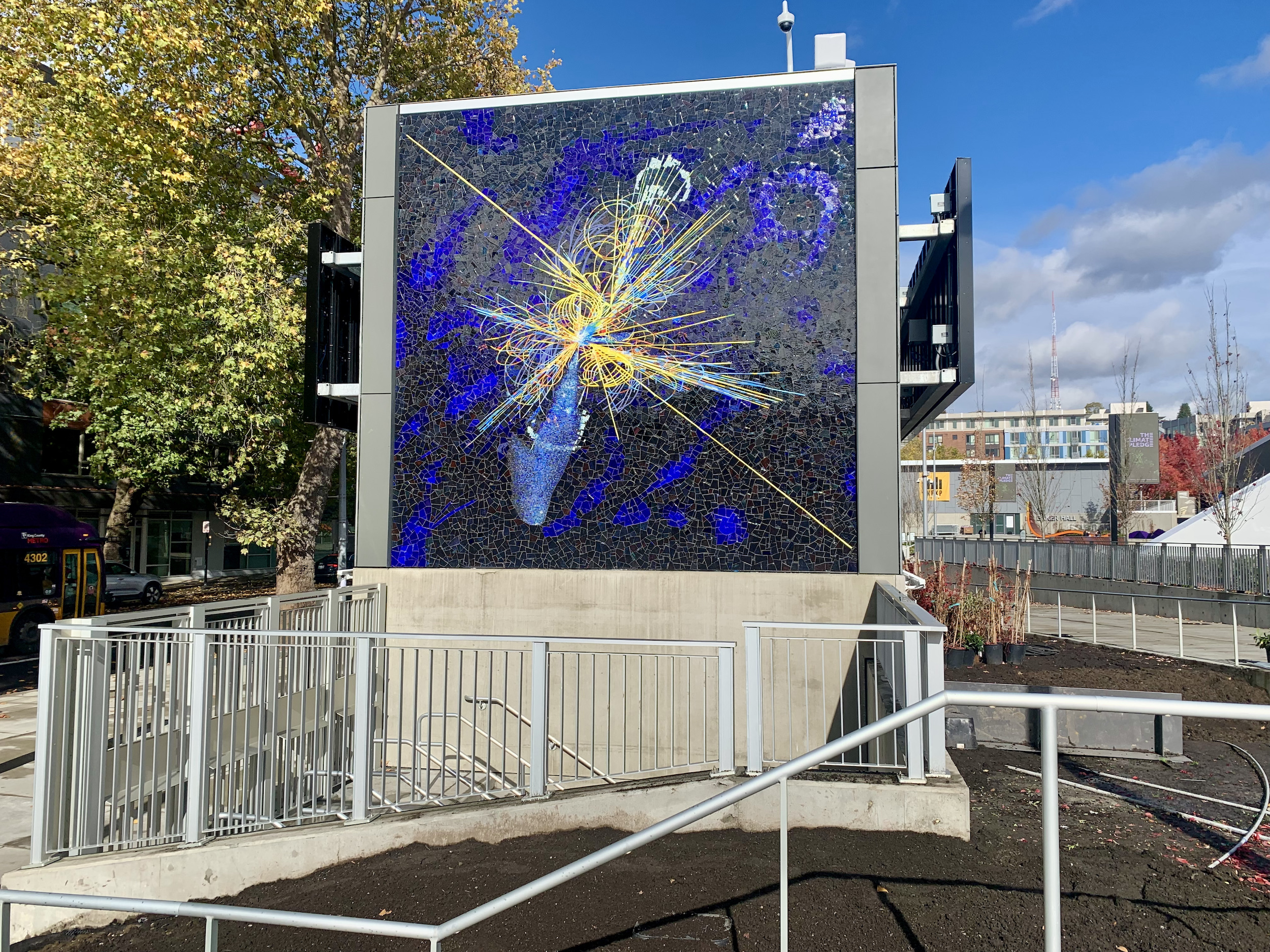 Just across the plaza to the north, next to KEXP, is a cluster of sculptures that constitute “Axis Lounge,” by Seattle installation artists Laura Haddad and Tom Drugan. The sculptures — a bendy wooden wave, a geometric clump in glittery purple, a red mosaic wall featuring UFOs, butterflies, zebras and rain clouds — were inspired by the Jimi Hendrix song “Bold as Love.”

Music is an integral part of the new arena (rather than a reverb-heavy afterthought, as at KeyArena), with KEXP helping to program the hockey game tunes, a recording studio built into the lower level and a baffling number of sound-dampening baffles hanging from a historic landmark: architect Paul Thiry’s iconic 1962 roof.

“Axis Lounge” is built as an interactive space, and already appears to be irresistible. When I was there, two people were lunching on a bench amid the sculptures, even as a worker was installing the final plantings. 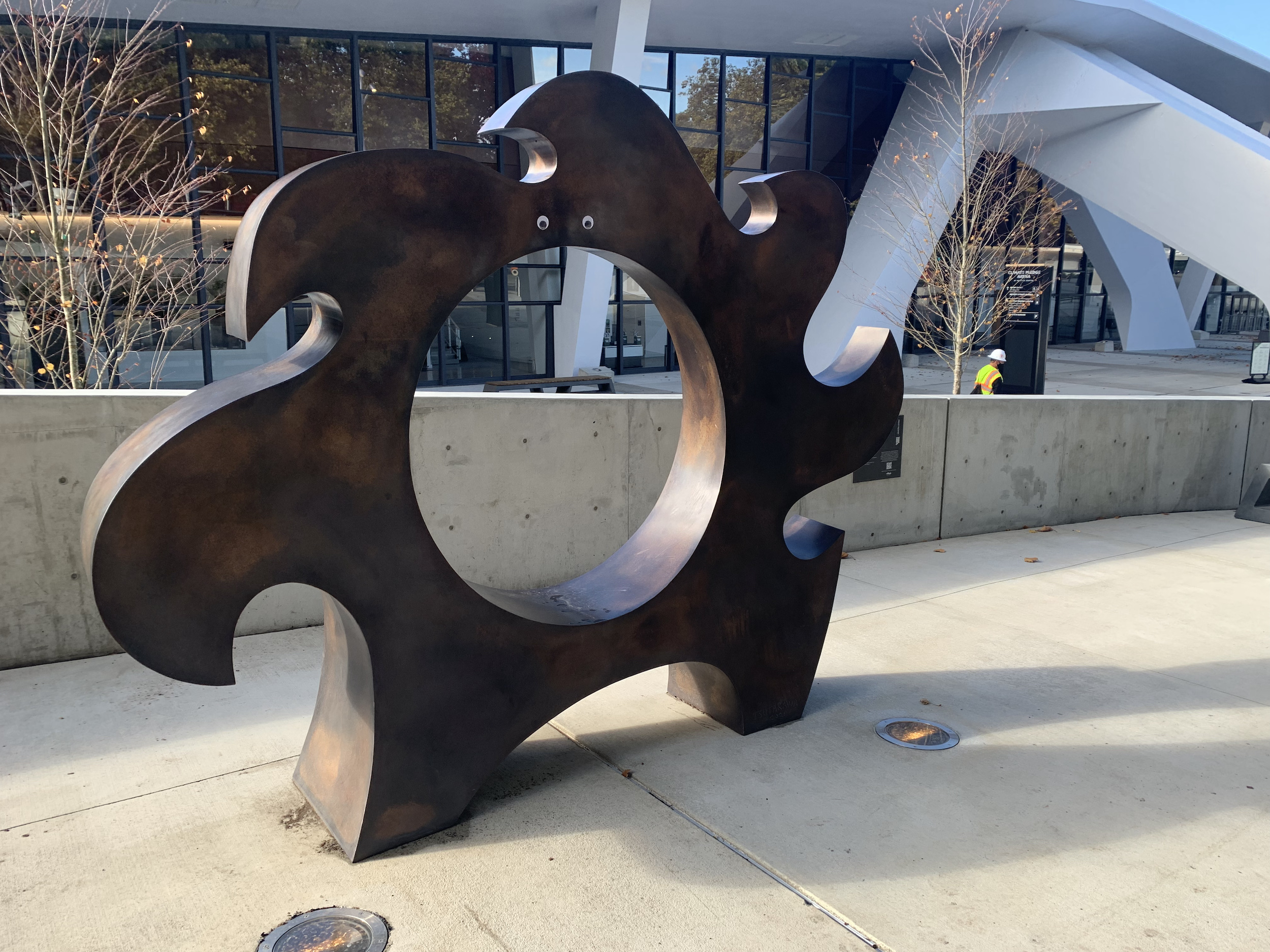 Also slated as interactive is heralded Northwest artist Gerard Tsutakawa’s new sculpture, “SeaWave.” Located on the east side of the arena, the 7-foot-tall, round bronze piece is meant to conjure the endless play of wind and waves. When I walked by, someone had stuck large googly eyes near the top, making it look less like rolling waves and more like a crazed, dancing Muppet with a big open mouth. This sort of playful animation probably isn’t the “interactive experience” the art planners intended, but it does emphasize the public in public art.

If you’re checking out the visual art at the Pledge on your way into the Coldplay concert (Oct. 22) or the Kraken’s first home game (a different sort of cold play, Oct. 23), keep in mind that three of the arena artworks have yet to be installed: “Crow Commute,” a city history etched in stainless steel panels by Seattle comics artist Megan Kelso; “The Raven and the Light,” a meditative outdoor room by Iole Alessandrini; and “North Light,” another illuminated piece by Haddad and Drugan. 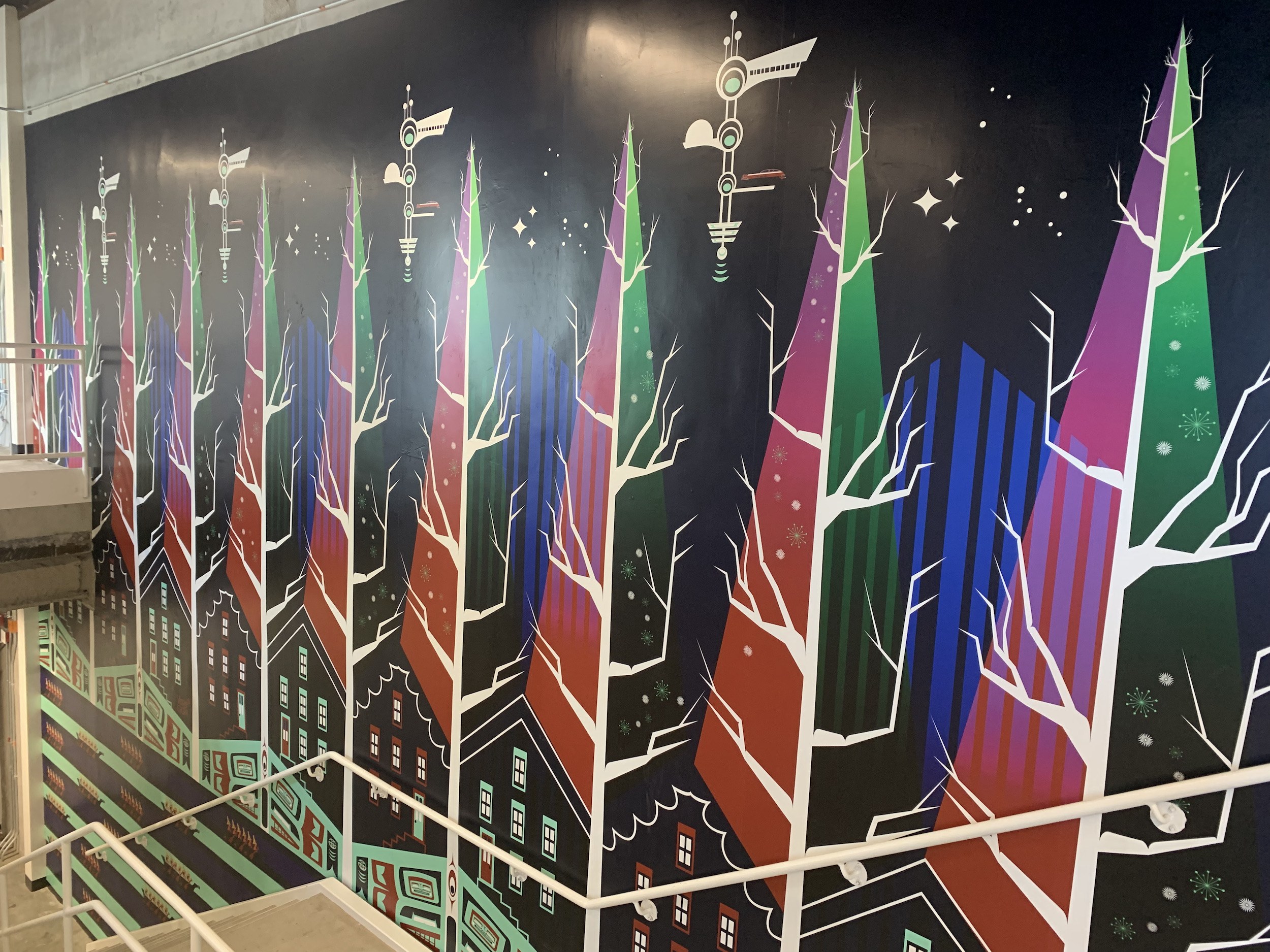 But there is one more piece that’s viewable now — at the southeast corner, in one of the arena’s “snorkels” (the facilities that house the mechanical systems that allow the building to “breathe”). Through the windows at plaza level, you can see a mural by Jeffrey Veregge, a Northwest artist and member of the Port Gamble/S’Klallam tribe. “Legacy” is a vivid painting in his signature, self-described “Salish geek” graphic style, which combines Coast Salish design elements with mod cartoony figures and retro-futurist robots.

Veregge’s piece tells the story of the region chronologically, from the bottom up. The lowest band (at the foot of a staircase leading to underground parking) depicts Indigenous figures paddling Coast Salish canoes, with their distinctive prows. On top of that is a row of longhouses. Then come wooden and windowed settler homes and, way above those, what look like space robots carrying cars — figures that fit right in with the Space Needle’s Jetsons vibe and other Space Age visions from the World’s Fair.

But the largest elements in his mural are the trees, which Veregge says bear witness to all human stories, from Indigenous through futurist. There are no epic concerts, no hat tricks, no “worlds of tomorrow” without them. 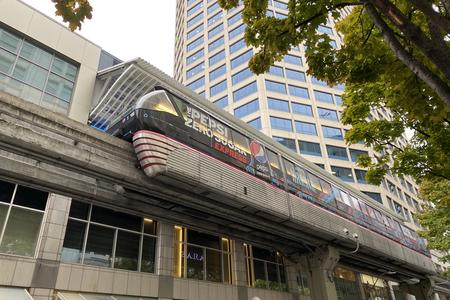 ArtSEA: The Seattle monorail ride that was all a blur

Plus, new uses for construction cast-offs in South Lake Union, and the return of Seattle Opera and Lit Crawl. 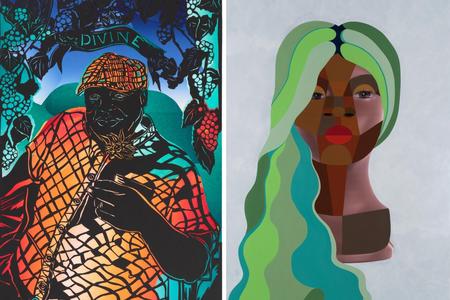 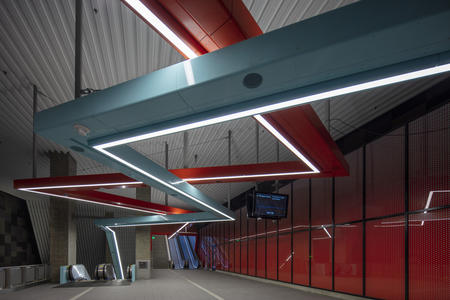 Plus, film festivals showcasing topics from Jacques Cousteau to a South Asian coming of age.

by / September 30
Article continues below

ArtSEA: The Seattle monorail ride that was all a blur

Plus, new uses for construction cast-offs in South Lake Union, and the return of Seattle Opera and Lit Crawl.

Plus, film festivals showcasing topics from Jacques Cousteau to a South Asian coming of age.