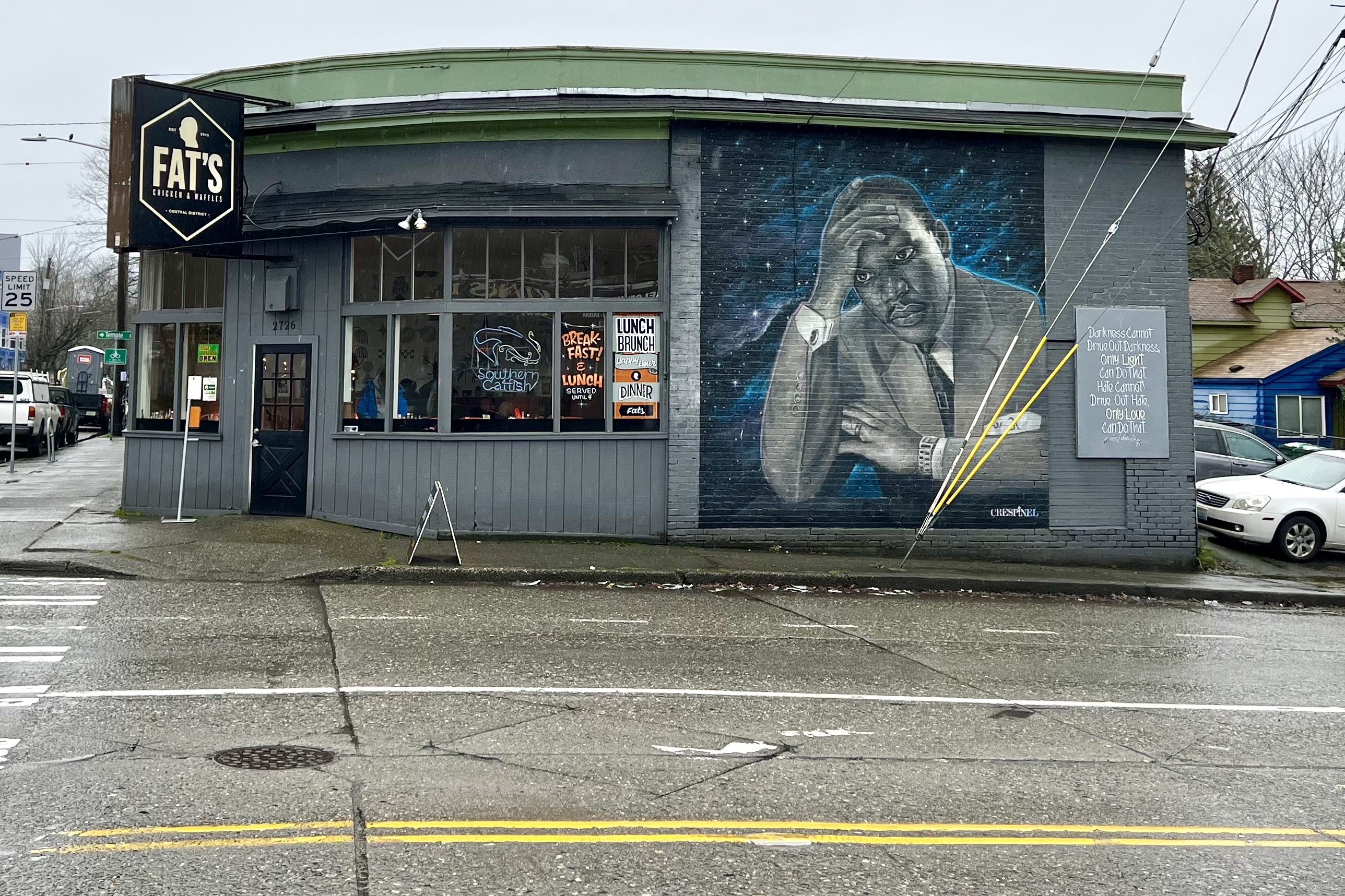 We’re coming up on Martin Luther King, Jr. Day, which has me thinking about the civil rights leader’s connection to the arts. Certainly, King was a poet himself, using rhythm, metaphor, alliteration and musicality to magnificent effect in his preaching and oratory. He understood the transformative power of music as well, from gospel choirs to jazz (the latter of which he famously called “triumphant music”) to the Freedom Concerts organized by his wife Coretta Scott, a soprano who studied music at the New England Conservatory.

The Rev. Dr. King also had a keen grasp on the essential role that photojournalism and television played in documenting the civil rights movement and increasing support for the cause. His eye for powerful visuals extended to fine arts too. For a 1963 exhibit called Freedom Riders, featuring paintings by civil rights advocate May Stevens at Roko Gallery in New York City, King signed the catalog preface, which read:

“The men and women who rode the freedom buses through Alabama, who walked in Montgomery, who knelt in prayer in Albany, who hold and sing We Shall Overcome Someday in the face of hostile mobs — their acts cry out for songs to be sung about them, and pictures to be painted of them.”

The year before, legendary Seattle artist and University of Washington instructor Jacob Lawrence — a vivid visual chronicler of Black history — had done just that with his 1962 painting “Students and Soldiers,” addressing the violence around school desegregation. 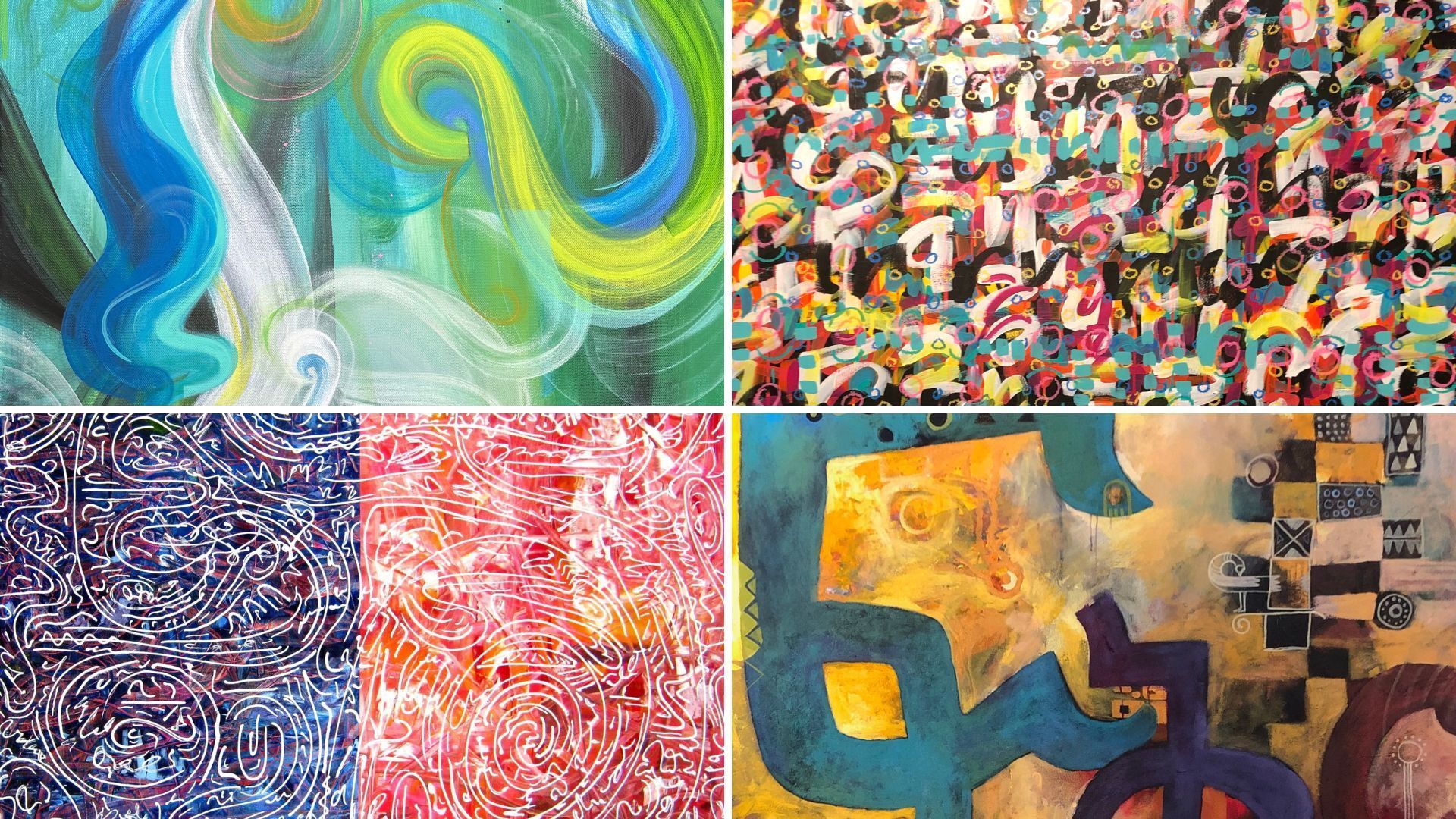 The Northwest African American Museum is honoring MLK Day as it always does, with a daylong series of talks, activities, film, music and food — but for the first time since the pandemic started, the event will happen inside the museum.

While NAAM has stayed busy over the past couple years, including offering online programming and starting its own touring choir, the historic Colman School building has remained closed to the public. But on Jan. 16, NAAM will celebrate both the legacy of Dr. King and the museum’s grand reopening (programming 11 a.m.-5 p.m., afterparty 5-8 p.m.).

The event includes the debut of a new art show, The Colors of Life: African American Abstract Art and the Regathering of Community (Jan. 16 - June 19). The exhibit features four Black Northwest artists whose abstract work twists and shimmies on the walls — such as Vincent Keele’s paintings, which swim with a secret language, hieroglyphic markings on deep blocks of color. 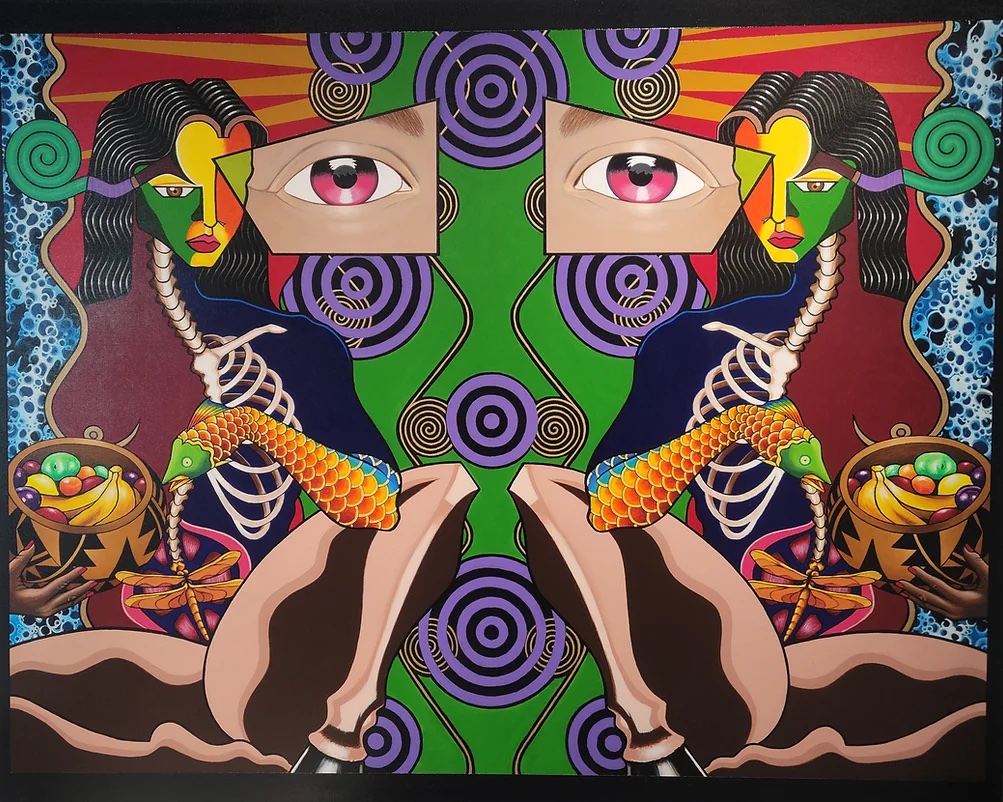 “Math Fallacy” by Seattle artist Bryon Stewart, one of the three artists featured in the new show at Onyx Gallery in Midtown Square. (Onyx Gallery)

“Math Fallacy” by Seattle artist Bryon Stewart, one of the three artists featured in the new show at Onyx Gallery in Midtown Square. (Onyx Gallery)

MLK Day weekend is an opportune occasion for a couple more new art shows in the Central District. Onyx Gallery, which shares a Midtown Square location with new Black-creative retail shop Arté Noir, is presenting three local artists on the movable walls of the sleek venue (Jan. 10 - Mar. 3; artist reception Jan. 14, 1-5pm). Check out Bryon Stewart’s boldly stylized figurative illustrations, which in his artist statement he calls “portals to other worlds, other ideas full of positive intention where entangled energies come together in a moment of observation.”

Also in the mix is longtime Seattle artist Robert Horton, who says he’s often inspired by music — evidenced in the fluid energy of his work. And Ethiopian-born, Northwest-based Tsehaye Afeworki brings his thickly painted acrylic portraits, in which blurred-out brush strokes make faces appear to shimmer and shift as if underwater.

Just down the block, Wa Na Wari presents a new show (opening event Jan. 14, 6-8 p.m.; runs through April 16) featuring a lively concoction of artists from all over. Included is Kriston Banfield, from Trinidad and Tobago, whose surreal, mythic paintings explore hyperpigmentation, with glowing figures in blue-black, purple and chrome-yellow skin (live-streamed artist talk Jan. 20 at noon).

Also on deck: New York City-based multidisciplinary artist Sable Elyse Smith, who presents “How We Tell Stories to Children,” a single-channel video with a rush of clips — including a personal phone conversation with her incarcerated father. Amanda Howell Whitehurst, of Jacksonville, contributes images of empowered women in both vintage comic-book style and lush portraits. And Seattleite Bonnie Hopper, known for her paintings of jazz icons, brings a series of vibrant collage works. 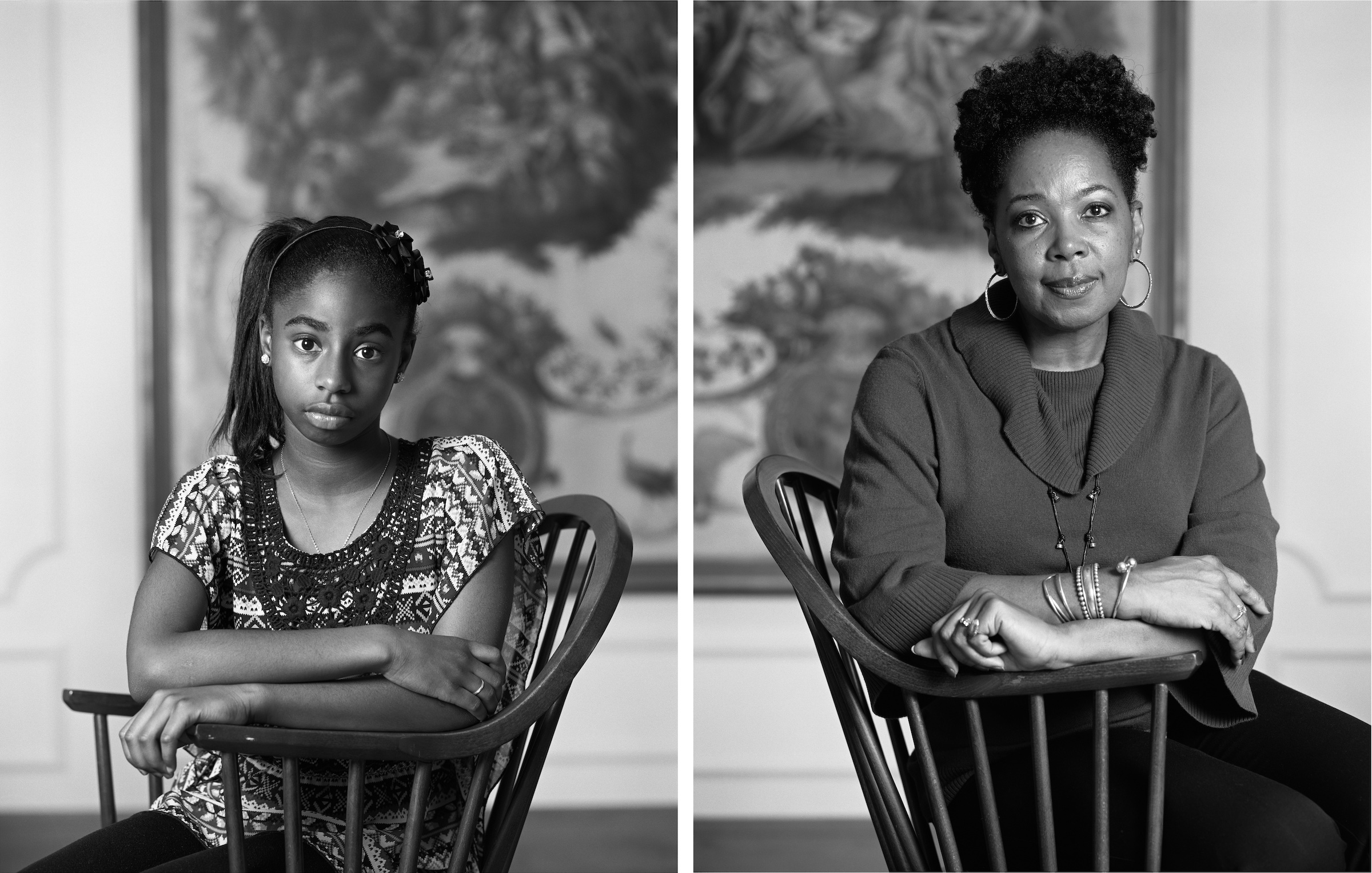 For his 2012 “Birmingham Project,” Dawoud Bey photographed children and adults (here Taylor Falls and Deborah Hackworth) in honor of those killed in the 16th Street Baptist Church bombing in 1963. Part of the series is included in the current show at SAM. (Seattle Art Museum via Grand Rapids Art Museum)

For his 2012 “Birmingham Project,” Dawoud Bey photographed children and adults (here Taylor Falls and Deborah Hackworth) in honor of those killed in the 16th Street Baptist Church bombing in 1963. Part of the series is included in the current show at SAM. (Seattle Art Museum via Grand Rapids Art Museum)

There are plenty more artful ways to mark MLK Day across the city.

At Seattle Art Museum, it’s your last chance to experience the powerful exhibit Dawoud Bey & Carrie Mae Weems: In Dialogue (through Jan. 22), featuring work by two of the most celebrated photographers working today. In more than 100 photos taken from the 1970s through the present, the artists reveal how the lives of ordinary Black people — whether hugging, hanging out, or reading the newspaper — are imbued with longstanding societal issues around race, class, gender and power.

Included are several images from Bey’s “Birmingham Project,” which he created a decade ago to commemorate the 16th Street Baptist Church bombing in Birmingham, Alabama, which killed four girls in 1963. These striking side-by-side images feature two portraits: one of a person the same age as one of the victims, and the other of an adult 50 years older, the age the child would have been if she’d survived.

At Town Hall, Seattle’s own Bushwick Book Club presents original live music based on the New York Times bestselling novel Red at the Bone, by Jacqueline Woodson (Jan. 14, 7:30 p.m.). Set in the 2000s but with a timeline that stretches from the the Tulsa race massacre of 1921 to the musical heyday of Prince, the book follows two interwoven families and reveals how history never really stays in the past.

And on KEXP Radio, the 23rd annual Expansions MLK Unity Party (Jan. 15, 6 p.m. - Jan. 16, 2 a.m.) celebrates the civil rights icon with a live broadcast from the Clock-Out Lounge. The show begins with DJ Supreme La Rock spinning Sunday Soul, and continues with DJ Riz, Kid Hops and Brit Hansen — all playing music in homage to Dr. King. In-person tickets are sold out, but you can still tune in and turn it up.