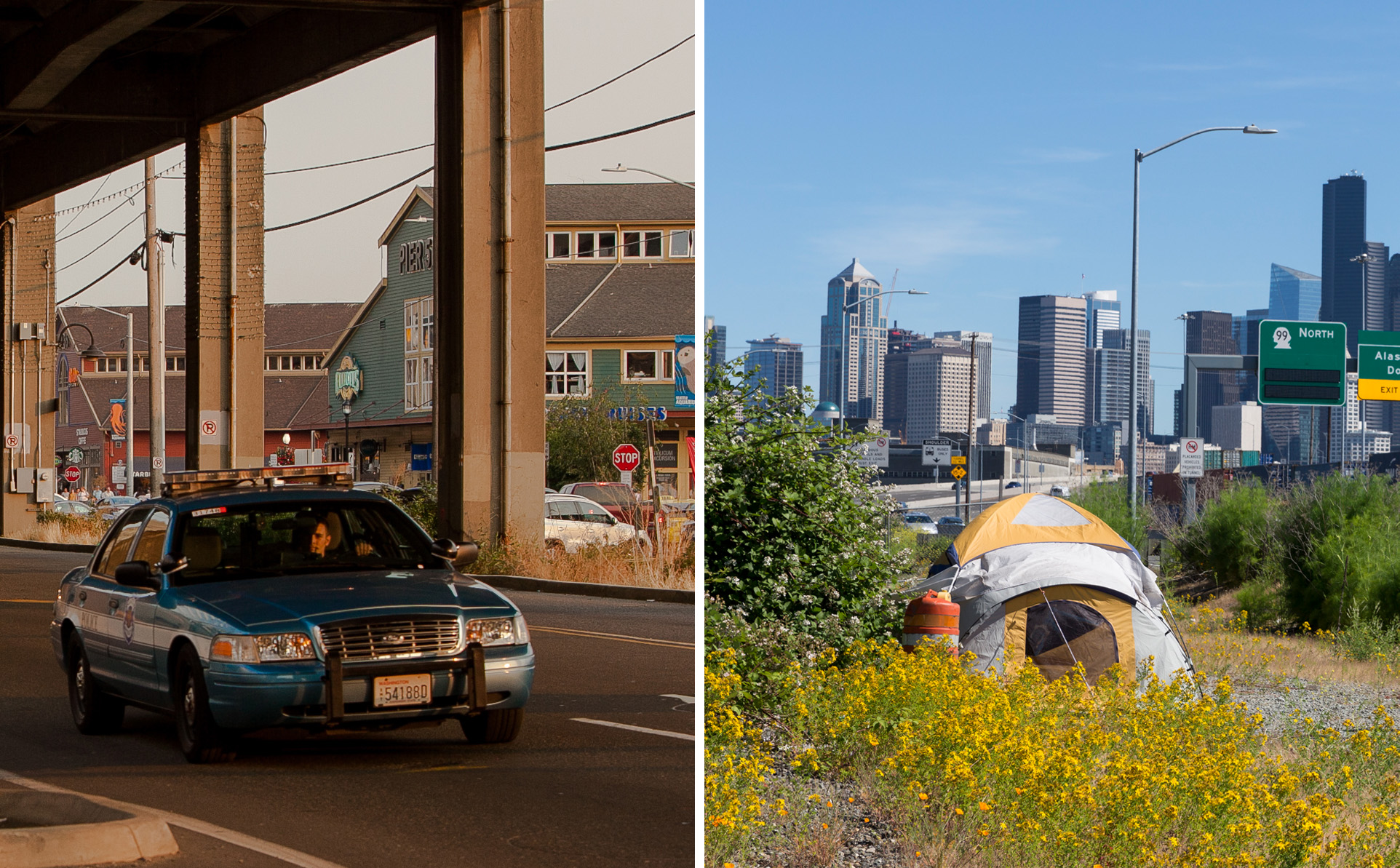 Despite projections of a significant revenue shortfall and fears of a potential recession next year, the council and mayor avoided laying off city workers and funded key priorities including public safety, affordable housing and plans to alleviate homelessness.

Seattle’s mayor releases a proposed budget every September. Council members then introduce and vote on amendments to add or subtract items before finalizing the budget by balancing their added priorities with the mayor’s proposal.

This year’s dissenting votes came from the council’s progressive and conservative wings.

As she does each year, Councilmember Kshama Sawant voted against the budget on the grounds that it makes cuts to social services and programs that could’ve been avoided had the council increased taxes on big businesses like Amazon.

Councilmembers Alex Pedersen and Sara Nelson voted against the budget in part to protest the council’s decision to eliminate 80 of roughly 240 unfilled police department positions, among other small cuts to the department.

During Monday’s budget hearing, Pedersen said, “I cannot in good conscience endorse a final budget that I believe fails to learn from recent policy mistakes on public safety and falls short on public safety for a third year in a row.” Nelson echoed his concerns and added a few, such as the council’s move to restrict how SPD can use any salary savings it incurs next year and the budget’s lack of increased funding for graffiti removal.

Next year’s police department’s budget grew to more than $370 million from $355 million in 2022. Removing 80 vacant officer positions on paper is unlikely to have an impact on the department’s on-the-ground operations.

More than 400 officers have quit SPD or retired since January 2020, and the department still has close to 240 vacant officer positions to fill. Mayor Bruce Harrell and police department officials have set a goal of filling 120 of those vacancies next year with new hires. But the department also expects to lose another 105 officers in that time, so the goal is a net 15 officers. The final city budget fully funds those 120 positions and provides more than $4 million for the department’s hiring and retention program.

Removing 80 vacant positions SPD doesn't expect to fill is meant to clean up the budget yet still leave the department with significant breathing room for hiring should it surpass its staffing goals. Nelson, however, said that doing so sends a message to potential applicants and existing officers that the council doesn’t fully support the police, which, in her view, may harm recruitment and retention.

In her explanation of why she was voting to cut the 80 positions, Council President Debora Juarez reminded her colleagues they could vote to reinstate the positions should SPD surpass its hiring goals. Councilmember Lisa Herbold chided Pedersen and Nelson for their suggestion that the council isn’t funding the police.

“This misinformation results in members of the public not understanding that the council has fully funded SPD’s hiring budget for the third year in a row,” Herbold said during Monday’s budget hearing. “I feel like this conversation we’re having actually hurts retention and it hurts hiring. … The budget discussion is not acknowledging that 99% of the mayor’s proposed budget is included in the balancing package.”

The council’s balancing package did cut some police department requests, such as $1 million to pilot a gunshot detection system. But they largely acquiesced to the mayor’s vision for policing, including moving the parking enforcement unit back to the police department from the Department of Transportation, a move that’s expected to save the city about $5 million in administrative costs.

In a written statement, Mayor Harrell celebrated some aspects of the budget: "The amendment process led to important changes in the proposed budget, including ensuring our police recruitment plan is funded and respecting the requests of parking enforcement officers to reside in SPD. The Council embraced our proposed budget’s needed investments in improving public safety, urgent action on the housing and homelessness crises and recommitment to the essential services that residents demand."

In an interview with Crosscut, Council budget chair Teresa Mosqueda framed the city budget’s approach to public safety as two-pronged: It pays for policing and invests in social services and police alternatives.

The budget adds a dedicated phone line for first-responder crisis intervention and funds a program to send mental health professionals out with police officers for 911 calls about mental health crises. In response to student protests in the wake of the Nov. 8 Ingraham High School shooting, the council added $4 million to increase mental health services in schools over the next two years.

The budget includes $1.5 million for the King County Regional Peacekeepers Collective, a group that intervenes in youth violence and engages in restorative justice. Another $220,000 pays for behavioral health outreach in the Chinatown-International District.

The final budget also adds $5 million in funding over two years over the mayor’s original proposal for LEAD, a pre-filing diversion program that connects street-level drug and sex-work offenders to services, and CoLEAD, an intensive street homeless outreach program, though program managers say they’re still about $5 million short of being fully funded.

Another $1 million will be used to help people avoid eviction and $450,000 will help fund pro bono legal representation for low-income tenants in eviction court.

The city plans to spend more than $100 million each year through 2024 to address homelessness. Of that, more than 80% will be transferred to the King County Regional Homelessness Authority to manage the regional response to homelessness.

The council also increased funding for human service provider contracts to match inflation. The mayor’s proposed budget sought to save money by capping human service provider contracts at 4% rather than adjusting them to the rate of inflation, as promised by a 2019 Seattle law. The human services sector — which includes homeless outreach, shelters, food banks, youth counseling and more — has struggled with high rates of burnout and turnover as workers do increasingly challenging jobs for low pay.

The budget provides about $20 million a year for Green New Deal initiatives, including climate-resilience hubs, Indigenous-led sustainability projects, a program to help low-income households convert from oil to electric heating and more.

To help support low-income communities and communities of color at higher risk of displacement, the city is spending another $20 million a year on equitable development initiatives to support community-driven projects and businesses. These include projects like child-care centers, community centers and small businesses.

The budget spends $33 million each year to support economic revitalization with an eye toward pandemic recovery. The money will be used to help low-income commercial tenants, provide small business loans and help Downtown recover from COVID-19’s economic impact.

The mayor’s proposed budget was written with the grim projection of a $141 million revenue shortfall over the 2023-2024 biennium. Then in November the forecast got grimmer, projecting an additional $82 million shortfall thanks in large part to the cooling housing market’s impact on real estate excise taxes.

Despite this, the next biennial budget avoids laying off current city employees and making deep cuts to existing programs, in part by cutting new proposed programs and by eliminating vacant positions in departments across the city.

The bulk of the balancing came on the back of the Jumpstart payroll tax on big businesses, which has significantly outperformed revenue projections. In 2021 it raised about $292 million, $92 million more than projected. The funds are meant to be spent on affordable housing, equitable development, climate resilience and small business support, but the council voted to allow Jumpstart revenue to be used for a broader array of things this year.

Mosqueda said that’s not something the city can count on every year. Pointing to the current economic downturn and its impact on tax revenue, Mosqueda said, “We need to have additional progressive revenue sources at our fingertips so that we are not subjected to the ebbs and flows of other revenue sources. … It can't just be increasing an existing tax. We'll have to look at multiple ways of raising [money] in various industries or entities to ensure that we have progressive, reliable revenue.”

In October, Mayor Harrell and Mosqueda launched a progressive revenue task force to identify other potential sources of tax revenue the city can draw on in the future.

Update: This article has been updated with a statement from Mayor Bruce Harrell.