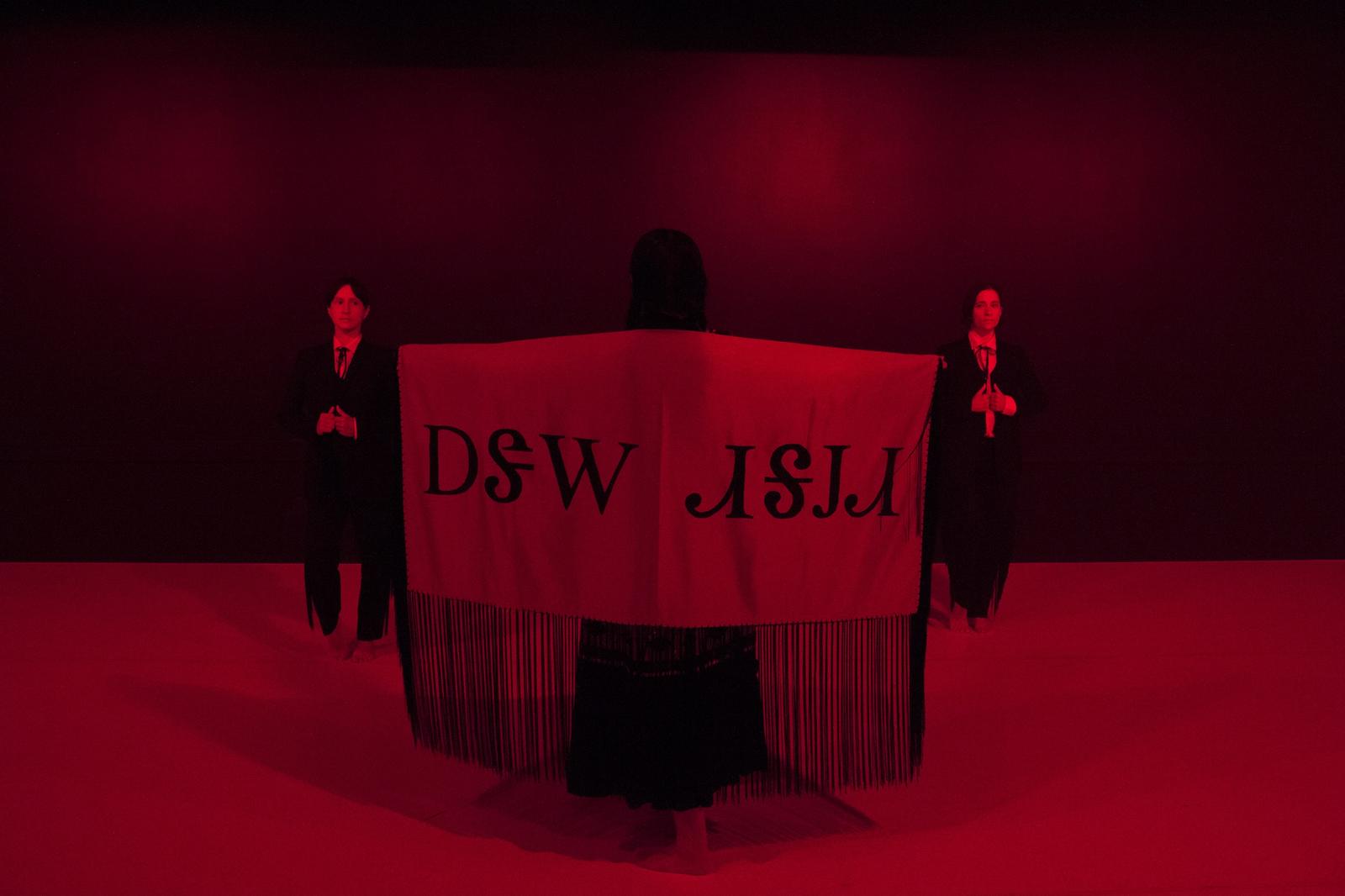 The artists behind RADIO III / ᎦᏬᏂᏍᎩ Ꮶ, Oklahoma-based Elisa Harkins and Canadian artists Hanako Hoshimi-Caines and Zoë Poluch, describe the performance as an “Indigenous futuristic concert and a beautifully uncomfortable dance performance.” (On the Boards)

This week, Brangien and Margo are highlighting a few weekend recommendations from our Fall Arts Preview.

How do David Lynch, cowboy hats, minimalism, pumping electro beats and songs sung in Cherokee and Muscogee (Creek) fit together? At On the Boards, RADIO III / ᎦᏬᏂᏍᎩ Ꮶ (Sept. 22-24), a dance and music performance choreographed and performed by Oklahoma-based Elisa Harkins (who is Cherokee Muscogee, and composed the show’s music) and Canadian artists Hanako Hoshimi-Caines and Zoë Poluch, makes the connection. The artists describe the show as an “Indigenous futuristic concert and a beautifully uncomfortable dance performance” that aims to blend “popular dance with elitist trained dance,” per Hoshimi-Caines, and travel between worlds to create a new language of movement.

When you think of accomplished classical composers, do Cecilia Maria Barthélemon and Maria Antonia Walpurgis come to mind? How about Maddalena Laura Sirmen, Amélie-Julie Candeille or Marianne Anna Katharina von Martinez? Early Music Seattle’s Baroque Orchestra is bringing the work of these Silenced Voices (Sept. 25, 1:30 p.m.) to the Town Hall stage in order to, as they put it, “set the record straight!” 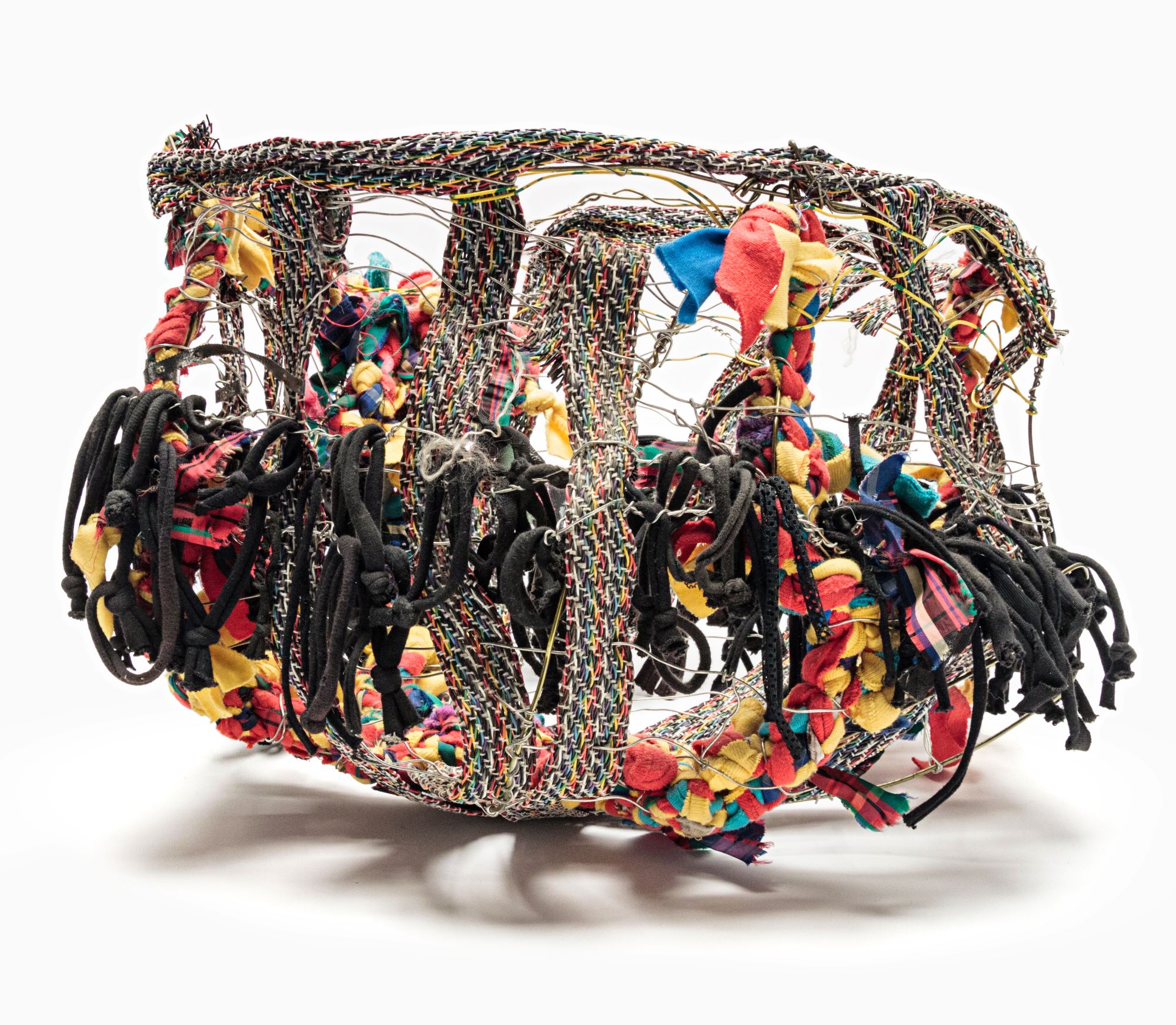 Colorful fabric sculptures by Seattle artist Marita Dingus are on view this fall in the locally focused group show "New Art and Sounds from the Pacific Northwest: Indie Folk" at the Bellevue Arts Museum. (Marita Dingus)

Colorful fabric sculptures by Seattle artist Marita Dingus are on view this fall in the locally focused group show "New Art and Sounds from the Pacific Northwest: Indie Folk" at the Bellevue Arts Museum. (Marita Dingus)

The Pacific Northwest has been profoundly (re)shaped by technology, yet the region is also known for its DIY spirit and artisan ethos. Independent local curator Melissa E. Feldman believes that acclaimed indie vibe plays out in locally made arts and music as well. Her show, New Art and Sounds from the Pacific Northwest: Indie Folk (through Jan. 16, 2023) at the Bellevue Arts Museum brings together 17 contemporary local artists who make handmade textiles, baskets, collage, carved-wood furniture and more. Among the rich mix: sculptor Marita Dingus, mixed-media artist Joe Feddersen and quilt maker Joey Veltkamp. (Also included: a playlist of Washington bands.)

Ongoing: The art of carving

During the most recent edition of the Seattle Art Fair at Lumen Field, a pair of piercing eyes welcomed visitors to the gallery booth of Seattle gallery Greg Kucera. The eyes (belonging to a woman in a niqab) were painted on a piece of pinewood carved into the shape of a rear-view mirror. The artwork, by Northwest artist Humaira Abid, is part of a larger series of work on view in Abid’s solo show at the gallery’s Pioneer Square digs (through Oct. 29). Abid will be in attendance on Thursday, October 6th for First Thursday Art Walk and Saturday, October 8th for an artist talk at noon. In Fight Like a Girl, Abid showcases her talent for combining intricately carved wood facsimiles — from envelopes to origami to tiny cacti — with incisive political commentary. 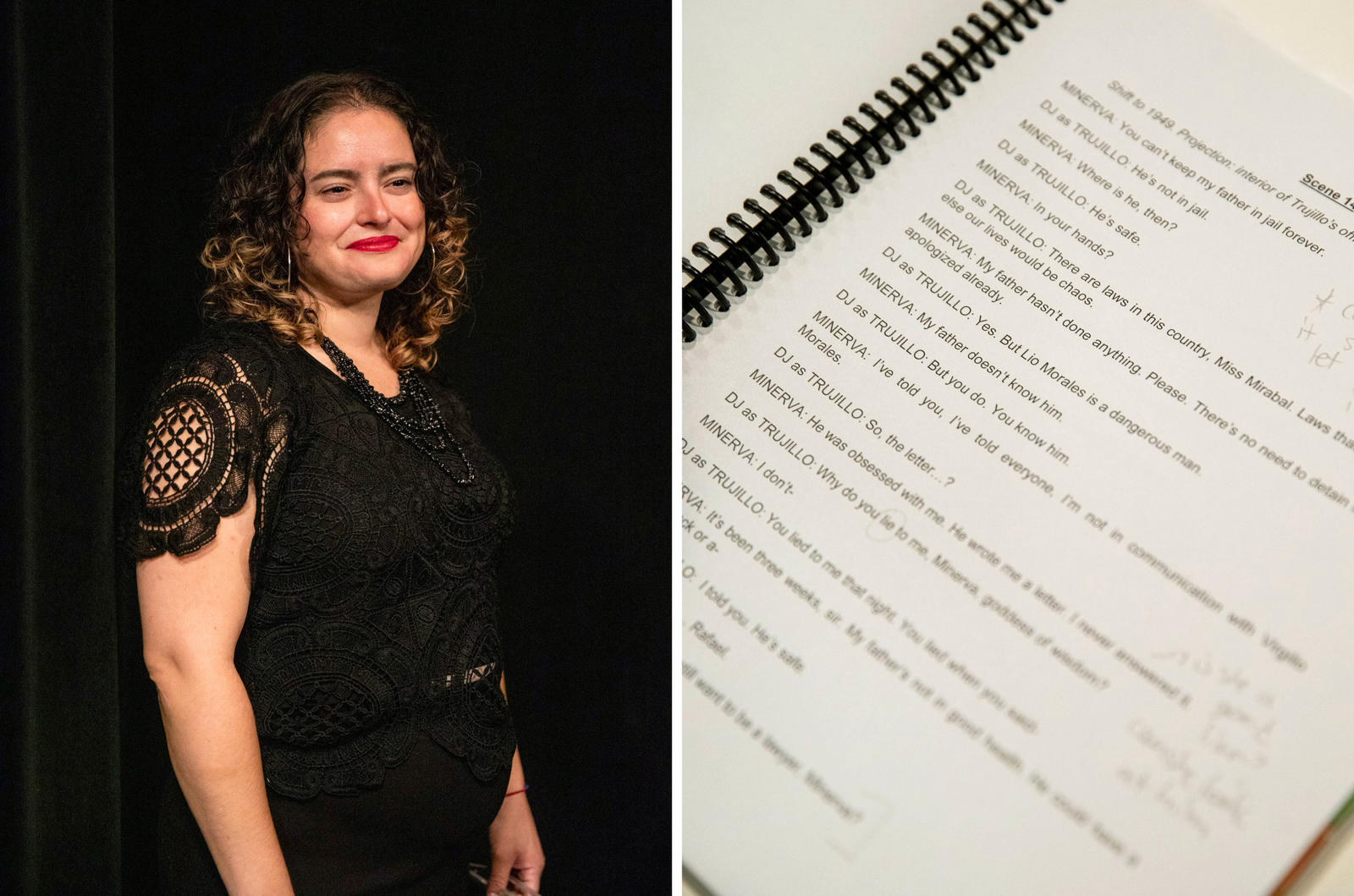 Ana María Campoy in the Black Box theater on Thursday, Sept. 1, 2022. Campoy is directing “In the Time of the Butterflies,” a play by Caridad Svich and based on the novel by Julia Alvarez. (Amanda Snyder/Crosscut)

Ana María Campoy in the Black Box theater on Thursday, Sept. 1, 2022. Campoy is directing “In the Time of the Butterflies,” a play by Caridad Svich and based on the novel by Julia Alvarez. (Amanda Snyder/Crosscut)

Just opened: A celebration of resistance

Just as Seattle theater director/arts educator Ana María Campoy got the offer to direct the season opener for Seattle’s Book-It Repertory Theater, In the Time of the Butterflies (through Oct. 16), the decision about Roe [v. Wade] was handed down. This adaptation of Julia Alvarez’s historical-fiction book of the same name follows the three Mirabal sisters, who were murdered for their plot to overthrow the Dominican Republic’s Trujillo dictatorship in 1960. “Suddenly, this play about the power of rage of women … felt very, very, very relevant,” Campoy told Crosscut in a recent interview. Campoy, who is Mexican American, has been working to bring more bilingual plays to the local stage and is having a major fall – one of the reasons we dubbed her one of the “four rising Seattle artists to watch.”

“The Constitution is a living document,” says playwright Heidi Schreck in What the Constitution Means to Me at Seattle Rep (Sept. 30-Oct. 23). “It is a living, warm-blooded, steamy document. ... It is hot and sweaty.” The old parchment probably feels extra hot and bothered these days, given the political climate. But in this Tony-nominated play, Schreck — who grew up in Wenatchee and spent years in the Seattle theater community — focuses on the document’s personal impact. Channeling her high school oratory-champ self (played in this production by Broadway alum Cassie Beck), she reveals how interpretation of the laws set forth in the Constitution have directly impacted the women in her family — including her own decision to have an abortion at age 21. 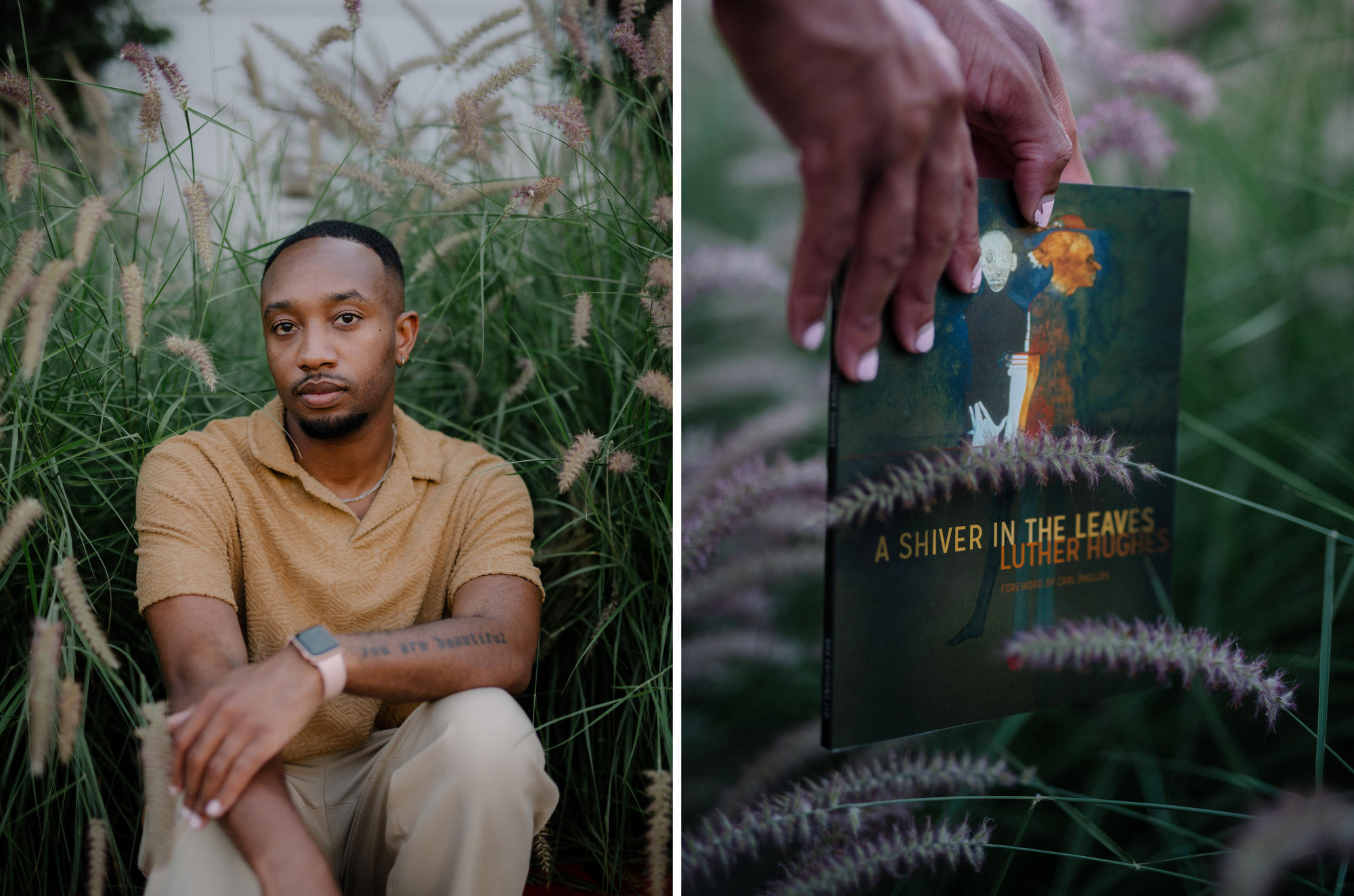 Poet Luther Hughes poses for a portrait outside his home in Columbia City on August 30, 2022. Hughes’ first book, A Shiver in the Leaves, was released earlier this year. (Grant Hindsley/Crosscut)

Poet Luther Hughes poses for a portrait outside his home in Columbia City on August 30, 2022. Hughes’ first book, A Shiver in the Leaves, was released earlier this year. (Grant Hindsley/Crosscut)

Hot tip: Keep an eye on Seattle’s Luther Hughes, a rising local poet (who we profiled in our recent story “Four rising Seattle artists to watch”) publishing his debut poetry collection on Sept. 27. He’s marking the occasion with a launch party at newly reopened “poetry emporium” Open Books that day. A Shiver in the Leaves is not your typical curl-up-on-the-couch nature poetry book about the leaves changing color, but rather an attempt to find a place away from violent anti-Blackness even as it continues to show up in the city and natural environment (“crows sorrowed the sky,” Luther notes at one point). Even so, Hughes says: “Whoever reads this book: Pair it with a nice glass of red wine.”

Angelique Poteat, another one of Crosscut’s artists to watch this fall, is debuting her second world premiere this fall. The local composer and clarinetist has written a clarinet and string quartet piece called Six Seasons, premiering during the Seattle Symphony’s “Visions of the Season” concert (Sept. 30) in Benaroya Hall’s Octave 9 performance space.

Instead of the customary four seasons (and Vivaldi’s), Poteat breaks up the year differently to mirror how people in the Pacific Northwest experience it. While the music starts with the “thankfulness” of fall and moves through the “crisp joyfulness” of snow, she breaks up the spring and summer — a decision Seattleites accustomed to our “false spring” will understand. “We have two parts of summer here: the earlier part, where we’re all excited to be in the sunshine and hike and take everything in,” Poteat says. “And then there’s the latter half of the summer where we’re all waiting to be enveloped in smoke, because that’s so much a part of our ecosystem here. At least it has been the last few years.”