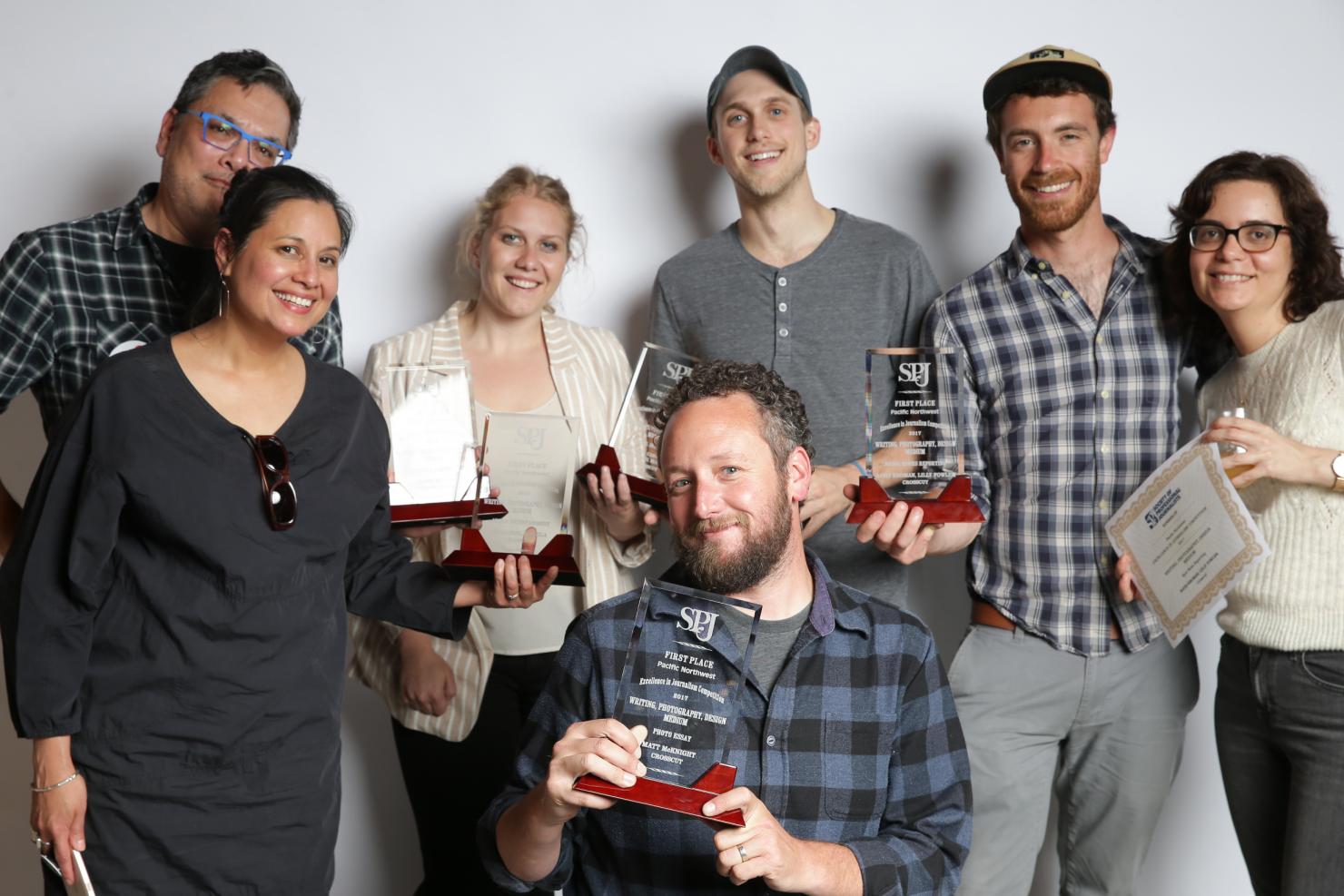 It was one rewarding award season for the reporters, editors, producers and photographers at Crosscut and KCTS 9. The recognition came for their work doing what great journalism does: It critiqued power and celebrated art. It found hope in our blighted past. It chronicled the drama of this turbulent political moment. It informed voters.

And it made us deeply reconsider our relationship to . . . oysters?

Last night, at the Society of Professional Journalists’ Northwest Excellence in Journalism awards ceremony in Capitol Hill, managing editor Florangela Davila won a first-place prize for her profile of the versatile and wildly talented local theater director, Malika Oyetimein. Longtime columnist Knute Berger was recognized for a series of wide-ranging columns that mourned a Seattle past, implored our hometown e-commerce giant to do more, and grappled eloquently with the legacy of Japanese-American incarceration. Writers David Kroman and Lilly Fowler took home gold in the category of Social Issues Reporting for their compelling story on a Black Muslim Ph.D. student at the University of Washington, who was, unbeknownst to him, targeted as a security risk by the federal government (They are also finalists in the National Religion Reporting Awards for this story). And photographer Matt McKnight won big for his poignant photo essay charting the short and influential tenure of City Councilmember Kirsten Harris-Talley. Producer Joseph Liu, along with editors, received a digital innovation award for their work on an interactive guide — complete with videos, a quiz and a full ballot recap — to the 2017 election.

Contributors Karen Ducey and Glenn Nelson also scored big wins for Crosscut. A full list of awardees and their prize-winning journalism can be found below.

At the 55th Northwest Regional Emmy® Awards Ceremony earlier this month, former KCTS 9 producer Ken Christensen took home two Emmys for his story on the TransMountain oil pipeline and his viral video on microplastics in shellfish. Producer Aileen Imperial snagged an Emmy, too, for her moving portrait of a formerly-incarcerated Japanese American who graduated from high school at the age of 92.

The praise arrives at a time of intense and exciting change for the newsroom. Cascade Public Media, our mother company, has recently committed to expanding our newsroom, which in the coming year will house fully-blown multimedia teams covering news and politics, arts and culture and science and the environment. We’re excited for the great work that’s ahead, and we’re glad to have you with us, every step of the way.

To all the winners: congratulations!

Column
Winner: One last 'dark-on-dark' in old Seattle, Alexa, fix Seattle, and Mossback in the Wild West: celluloid and a concentration camp by Knute Berger

Editorial & Commentary
Winner: I sat in protest with an athlete in the '90s. It's complicated, The Sonics star who ignited NBA dreams for black youth and A $70 barrier to equity at national parks by Glenn Nelson

Social Issues Reporting
Winner: Why am I a threat? By David Kroman and Lilly Fowler

Health/Science — Feature/Segment
“How Much Plastic Do You Want in Your Oysters and Clams?”
Ken Christensen — Associate Producer, EarthFix

Documentary — Topical
Reel NW, “Someone Like Me”
Bryan Tucker — Producer