'Growing fond of the gloom': How Seattle became home

Everywhere I went in 2019, I found myself missing a piece of the city. 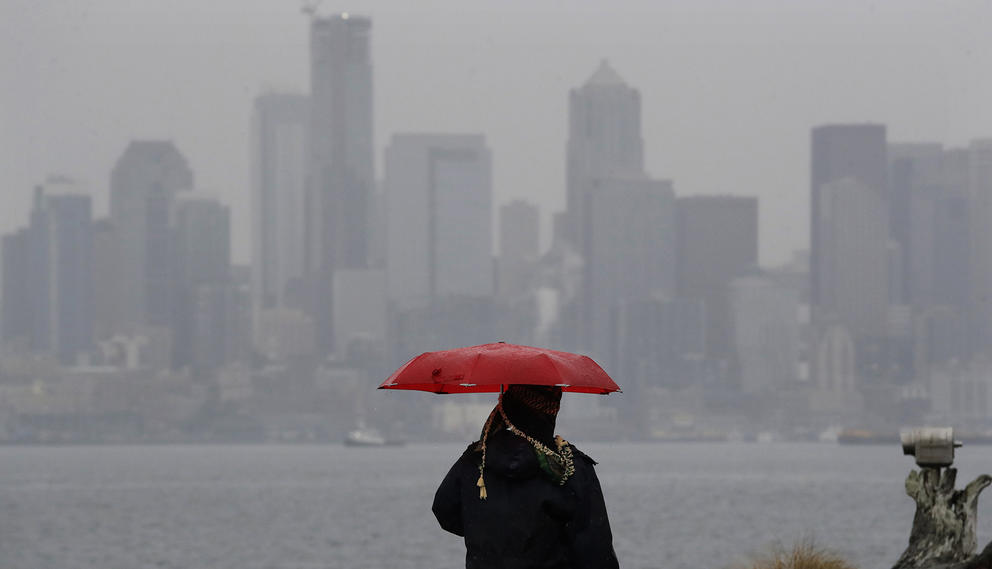 A pedestrian makes his way along a waterfront as downtown Seattle is partially hidden in a steady rain beyond, Nov. 18, 2019. The rain and gray skies which blanket the area feel like home, according to the author. (Elaine Thompson/AP)

I fell in love with Seattle this year by leaving it — over and over again.

Between a 12-state book tour, a vacation and some holiday travel, I was barely here in 2019, after moving to the city last summer to be near family. When I first arrived, full of Dorothy-esque enthusiasm, longtime locals (understandably) took a bit of relish in raining on my parade. They told me that falling for this town was about endurance: Survive your first winter, they said, and then you’ll be one of us. Chip away at the Seattle Freeze, they told me, and one day I, too, will earn the privilege of a Carkeek Park picnic with my friends. I should allow myself a trip to Hawaii in January or February, but other than that, I was instructed to put in my time and wait for Seattle to click.

Some of that, I assumed, was just light verbal hazing: It’s almost irresistible for anyone who’s been here longer than a year, it seems, to slip into the role of the grizzled old-timer: “Snowpocalypse 2019? That was nothing! Why, during the storm of ’17, I had to walk up Beacon Hill both ways in the snow!”

But there was truth to their warnings, too. For all of Seattle’s splendors — the parks, the coffee, the drinking of coffee in parks — this can be a tricky place to find your footing. It’s expensive. It’s a bubble. There’s too much traffic. Home ownership — or even housing — is out of reach for so many. In December, the sun goes down while soap operas are still on TV. I wasn’t living here long before those problems felt as thick as last October’s fog. I still found plenty of joys, like watching the salmon spawn, going on long walks far away from the Green Lake crowds or seeing Sue Bird straight up murder Phoenix at a Seattle Storm playoff game. But I had found the dark side of Oz, too: Seattle was just a place — and no place is perfect.

This year, though, I started to understand Seattle, not by hunkering down and enduring it as the locals had advised, but by flitting in and out of it until I appreciated, one by one, the strength of its offerings.

Over the course of 2019, I went to New York, Los Angeles, Chicago, Atlanta, Miami, St. Louis, Salt Lake, Little Rock, Portland, and Washington, D.C. I made stops in Ohio, Alabama, Mississippi and Wisconsin. And that was just for work. At multiple points this year, I landed at the Seattle-Tacoma International Airport after dark and had to be back in the security line by 6 a.m. (Sometimes when I close my eyes, I can still hear the disembodied voice of Ben Gibbard telling me to connect to the free airport Wi-Fi.)

Somewhere in the middle of that whirlwind of travel, I began feeling genuine, unprompted pangs of affection for Seattle — or, at least, for certain aspects of it. Sleeping in a friend’s apartment across the street from a Brooklyn nightclub, for example, I yearned for the relative quiet of our city, where we haven’t packed 2.5 million people into 70 square miles. (And as expensive as Seattle is, my friend’s rent is almost twice mine for the same amount of space.)

As I traveled across the South — my favorite region of the country, bar none, and one that I lived in for five years — I ate frequently and well. (And by “well,” I mean “deep-fried.”) It’s possible, of course, to eat healthy below the Mason-Dixon Line. (I should have exercised some restraint — and also just plain exercised.) But it’s so much easier to get a great salad in Seattle. Even the airport has an Evergreens.

And in Miami — where I lived for three years before moving here — I longed for a public transportation system that could actually get me anywhere in the city quickly, instead of moving me around the wealthy downtown in tiny, pointless loops. (One day, there will supposedly be a monorail between mainland Miami and the beach, but right now I have about as much faith in that project as I did in the The Simpsons monorail.) What a relief it was to land at Sea-Tac and use one card to take any combination of trains, buses and ferries to get wherever I needed to go next. I could be at my apartment in an hour, or on Bainbridge Island in 90 minutes. (It’s no wonder Seattle’s public transportation system was recently ranked first in the nation, much to the chagrin of longtimers who watch full buses pass them by on the way to the work. Being the best at something doesn’t mean that there’s no room for improvement.)

But I really knew that Seattle was wriggling its way into my heart during a vacation to the Greek island of Santorini. Basking in the Mediterranean sunshine, I realized that I actually craved the cloud cover. (A very expensive way to realize you’re growing fond of the gloom, but, hey, it worked!) Seattle’s clouds have come to feel like a weighted blanket, a shield from anxiety; by contrast, when I went to Texas this year, the the big skies that I have always found so liberating made me feel a little nervous — not so much that I would ever avoid the Lone Star State, but enough to tip me off that I’m acclimating to my new home.

“Home” is still a funny word for me to apply to Seattle, in part because I always thought “home” would be the best — or even my favorite — place I’ve ever lived. That’s not the case with this city. I didn’t come away from my year of professional travel feeling like Seattle was uniformly better than all the places I went. For each of the above complaints, there were a thousand things I adored and admired about each place I had the privilege of visiting and revisiting in 2019. Culturally, I feel like I belong in the South, with its more relaxed pace, than I do in the caffeine-fueled Pacific Northwest. For recreation, I prefer kayaking in Florida’s spring-fed streams to hiking in the Cascades. On any given day, I’d probably rather be surrounded by kind Midwesterners than cold-at-first Seattleites. In fact, natural beauty might be the only list on which I’d place Seattle at the top.

But inasmuch as homesickness is often the best indicator of home, that’s what Seattle unexpectedly became for me this year. I’ll grant that this was an inefficient process: I repeatedly deprived myself of this city only to realize what I liked so much about it, taking “absence makes the heart grow fonder” to its logical but exhausting extreme. Maybe I would have arrived at the same conclusion if I had followed the old-timers’ advice and just stayed put. I’m glad I did it this way, though, because I cherished all the more the moments I did get to spend in Seattle this year, like watching the Sounders win the MLS Cup on a particularly cloudy day or simply eating teriyaki on the Bainbridge ferry during an afternoon off.

I want more moments like that next year. In 2020, I want to stay home — and I’m ready to admit that’s here.