Was 2018 the year Seattle's growth hit a speed bump? 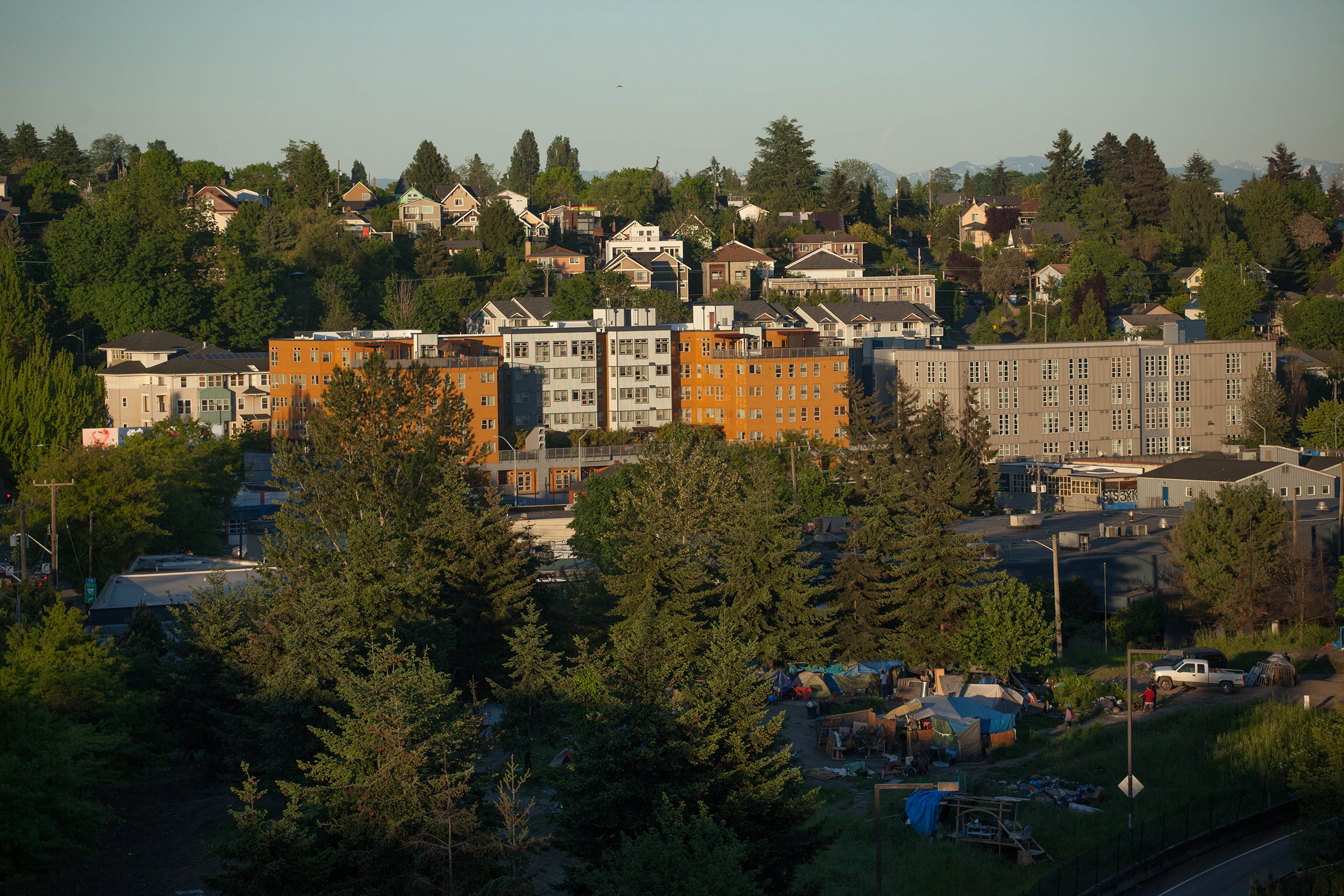 It was the year that the gnashing, seemingly insatiable beast of growth in Seattle slowed down. At least a little bit. At least for the time being.

After a half decade of meteoric jumps in housing costs, rents have nearly flattened and home prices are actually beginning to drop. This fall, amidst a glut of new apartment openings, the city saw just a one percent increase in median rents, compared with the nearly 10 percent year-over-year jump that previously put Seattle atop lists of fastest rent growth. Seattle’s median home values peaked in May at $751,000, according to Zillow. That’s down to $726,000 now — a slight dip to be sure, but the only drop in median value the market has seen since bottoming out in 2012.

Of course, a slight cooling is a far cry from a return to affordability. Zillow says median rent for a two-bedroom unit is still $2,400 a month. And to afford a median-priced home in the city — using the recommendation that no more than one-third of a person’s income go toward a mortgage — a buyer would need a household income of about $126,000 a year. Meanwhile, a shortage of housing for the region’s lowest-income residents means the homeless population continues to grow.

Seattle and its neighbors have a lot more work to do, and 2018 showed that significant progress will never be easy. After all, people really dislike change, especially when they feel they have no say in the matter. And in rapidly changing Seattle, that has manifested itself as a strong and persistent fight against density, new taxes to pay for housing and homeless services, and the loss of icons like the Showbox.

The depths of the region’s housing problem can be seen in the annual “point-in-time” count of the region’s homeless residents. Conducted in January, the effort found 12,112 people experiencing homelessness, more than half of whom were living without proper shelter. The total was up 4 percent over 2017.

Perhaps because the homelessness issue is long past the point it can be ignored, homeless and affordable housing advocates had one of their most successful state legislative sessions in recent history. State legislators passed seven bills to address homelessness and low-income housing, all of which had at least some bipartisan support. The package of new laws makes it more difficult for landlords to discriminate against low-income renters, helps keep permanently disabled residents out of homelessness, provides more land for affordable housing construction and improves access to better fund homeless services. In addition, the Legislature put $107 million into the State Housing Trust Fund — up from $72 million in the previous capital budget — a critical source of money for subsidized affordable housing construction.

In Seattle, attempts to create new funding for homeless services and housing did not go as smoothly. Without an income tax in Washington, opportunities for “progressive” revenue sources — that is, taxes that don’t take a disproportional percentage of low-income residents’ incomes — are few and far between. In May, the Seattle City Council unanimously adopted a so-called head tax that would have charged a $275 per employee fee on big businesses with gross annual revenue of $20 million or more. It would have generated $47 million a year for homeless services and housing.

But the blowback was fierce. Not only did Amazon and the Seattle Metropolitan Chamber of Commerce oppose it, but broad swaths of Seattleites also filled the council’s inboxes with angry reproach. On June 12, less than a month after passing the head tax, the council voted to repeal it, a move that didn’t appear to make anyone happy. In a brief moment of unity, the raucous crowd of pro- and anti-head tax coalitions joined together chanting “vote them out.”

The wake of the head-tax repeal left a lot of advocates scratching their heads. One small group of business leaders, academics and homeless service providers calling themselves the Third Door Coalition formed this summer to push a “housing first” approach in Seattle. Proven to have some success in other cities, a housing-first approach requires that permanent housing be provided to people regardless of their mental health issues or addictions. Housing-first advocates say the approach works because those problems can rarely be addressed if people aren’t meeting their need for safe, steady shelter. The Third Door Coalition is working on policy proposals and finding private and public funding for their ideas.

Not long after the city’s knockdown fight over the head tax, King County found itself embroiled in a fight of its own between sports and affordable housing. In question: $180 million in taxpayer money to fund upgrades at Safeco Field, since rechristened T-Mobile Park. Housing and homelessness advocates called it absurd to spend that much money on the stadium while 12,000 people were living without permanent homes in King County. Stadium executives and Mariners fans pushed back. In the end, the King County Council struck a slight compromise, giving $135 million to the Mariners, with most of the rest going towards affordable housing and a bit towards tourism promotion.

The contentious fights didn’t end there. When news broke in August that the Showbox, the beloved downtown music venue, was slated to be torn down as part of a new apartment development, Seattleites of all stripes, along with prominent local and national musicians, saw it as a bridge too far. The city council took up the mantle to save the building that housed the venue and voted unanimously to temporarily include it in the Pike Place Market Historical District, making it much more difficult for the property owner to redevelop the site. As expected, the maneuver prompted the property owner to file a lawsuit, the outcome of which is pending.

Granted, not every effort by the city to promote affordable housing was met with a huge pushback. In September, the city council passed a resolution to prioritize using surplus city-owned land for affordable housing construction, the second such “surplus public lands” bills it passed this year. Giving affordable housing developers land at a significant discount or free means more of a developer’s budget can go towards building housing, rather than purchasing land. It also means that nonprofit developers can build low-income housing in high-demand neighborhoods, where land costs would normally price them out.

The city also won some victories on the long dragged-out fights against rules that would allow more density in the city’s single-family housing neighborhoods, which make up as much as 75 percent of Seattle’s residential spaces. City officials argue that allowing more people to live in single-family neighborhoods will help make Seattle more affordable and address longstanding racial inequities. It’s an approach Olympia has successfully taken in an effort to avoid Seattle’s housing fate. Opponents say it will irreparably alter the neighborhoods that they love.

One way the city wants to allow more people in single-family neighborhoods is by loosening regulations on Auxiliary Dwelling Units in order to spur construction of backyard cottages and basement apartments. That effort has been delayed by a lengthy appeals process led by the Queen Anne Community Council. In October, the city released a final environmental impact statement about its proposed regulations, as required by the appeal process. The cottage legislation could have theoretically gone forward at the point. But an unsatisfied Queen Anne group appealed yet again, delaying the fight into 2019.

A similar effort to delay upzones in 27 neighborhoods throughout the city has been playing out over the past few years. The Seattle City Council wants to pass a citywide version of its Mandatory Housing Affordability program that’s already in place in South Lake Union, Downtown, University District and Chinatown-International District. The program allows developers to build larger buildings in exchange for building or paying for affordable housing. In 2018, the program raised $13.28 million for affordable housing construction. The effort to implement it citywide has been delayed for more than a year by a coalition of neighborhood groups calling themselves SCALE (a delay that the city says resulted in the loss of as many as 717 units of affordable housing).

SCALE appealed the city’s final impact statement in November 2017, sparking a yearlong examination by a city hearing examiner. Just before Thanksgiving, the hearing examiner made his ruling, giving the city the green light to move forward on the policy. Councilmember Rob Johnson told Crosscut he hopes the council will be able to pass a final bill by the end of March, but SCALE is likely to come back with further legal action to try and stop him.

Time will tell if Seattle’s growth has truly slowed down, or if it was just catching its breath in 2018. Next year is already shaping up to be equally eventful. Several state legislators are already putting together bills to address density, backyard cottage legislation, tenants’ rights and more. The Seattle City Council will continue its effort to implement backyard cottage legislation and the citywide Mandatory Housing Affordability program.

With the point-in-time count of homeless residents just a few weeks away, we’ll soon know if the city and region are making progress, or if the cycle is just starting over again in 2019.