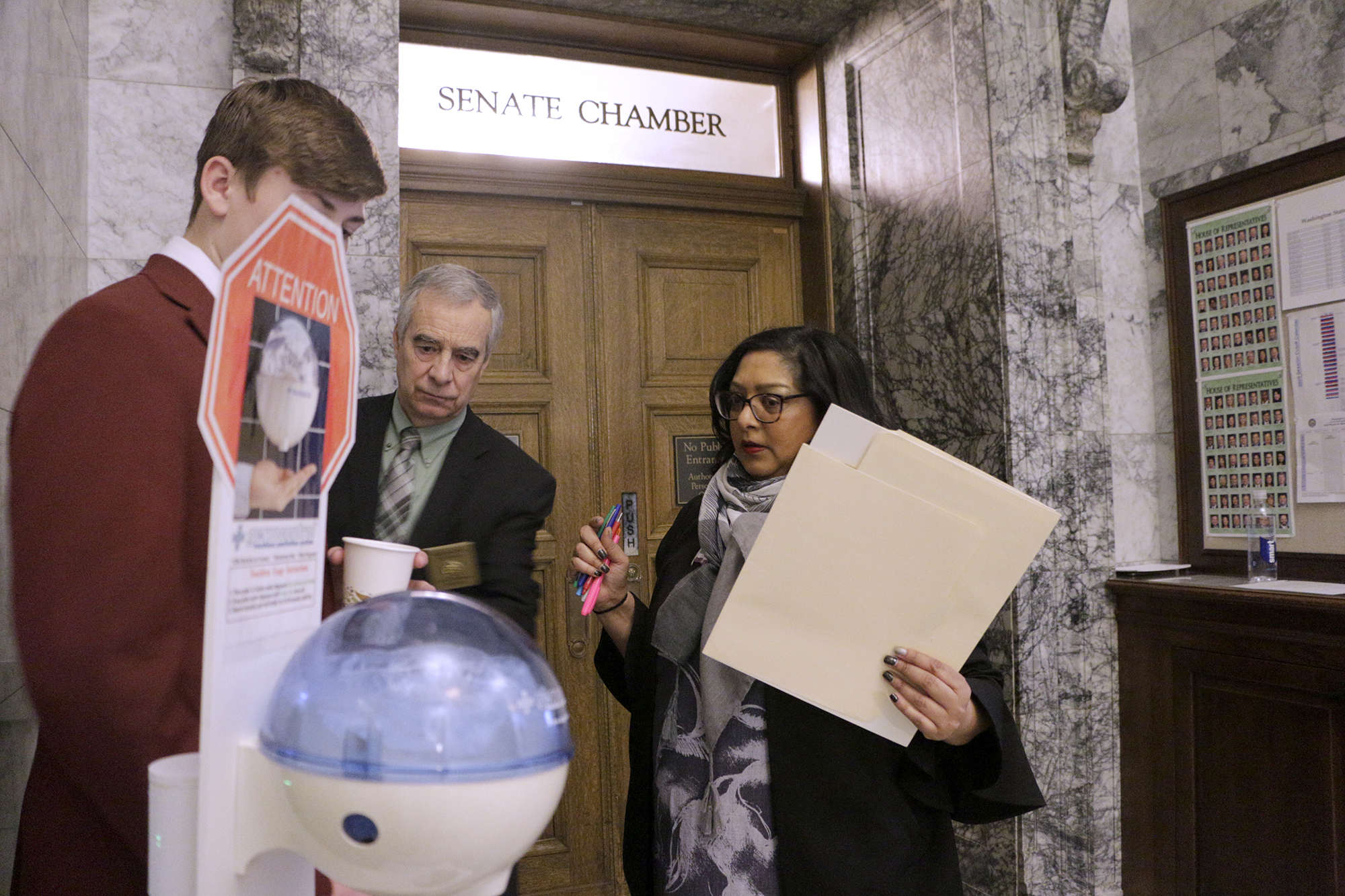 Democratic Sen. Mona Das, far right, talks to a page outside of the Senate chambers, where a hand-sanitizing station is set up, March 12, 2020, in Olympia. Lawmakers were finishing up their work amid concerns over the state's COVID-19 outbreak. For most people, the new coronavirus causes only mild or moderate symptoms. For some it can cause more severe illness. (Rachel La Corte/AP)

State lawmakers wrapped up the 2020 legislative session Thursday evening after increasing spending on homelessness and passing an emergency clause to combat the coronavirus.

Before adjourning the 60-day session, legislators passed a supplemental budget that makes adjustments to the two-year, $52.1 billion operating budget they approved in 2019. Over $170 million was approved for homelessness services such as rent assistance and permanent supportive housing. Other funds will go to things like improving childcare and supporting public health.

While the Legislature passed the supplemental budget mostly along party lines, funding for the coronavirus was approved in both houses unanimously.

“I hope that everyone can leave here today knowing that as you go back to your communities and your communities demand leadership from you, we will be able to work together as a team to rebuild the state after this crisis has passed and make sure that every corner of the state gets the attention that it needs, the help it needs and the boost it needs,” said Sen. Christine Rolfes, D-Bainbridge Island, during the final floor debate. “This budget and our past policies have created a very, very strong foundation.”

A majority of the coronavirus funding will be used for patient testing and to help slow the outbreak. Lawmakers set aside $25 million to assist with unemployment benefits for those who have been left or will be left without work. Concerns about the virus caused lawmakers to scale back funding in other areas of the bill. The coronavirus bill that cleared the Legislature in the final moments of session increased the amount of funding aimed at the pandemic to $200 million, which can be used immediately.

Over the coming year, part of the supplemental budget that focuses on homelessness will also cover funding for shelter capacity and housing developments. Democratic Gov. Jay Inslee initially proposed spending over $300 million at the beginning of the session from the state “rainy day” fund in order to address the state homelessness crisis, but lawmakers avoided using those funds, with concerns that there wouldn’t be enough left to cover other emergencies. Instead, cuts were made to the budget in other areas they deemed unnecessary.

Sen. John Braun, R-Centralia, complimented the budget during the final floor debate, but ultimately said he opposed  the final budget that was approved.

“It does a very responsible job of keeping a high reserve,” Braun said. “Given the circumstances, that’s a good thing and something we should all be grateful for.” He criticized funding towards homelessness, saying that too much of the money is being allocated to programs that haven’t shown any results.

The facial recognition bill, which also passed in the last hours of the session, mandates government agencies to disclose their use of the technology and also requires training and anti-bias measures to prevent it from being used against marginalized and vulnerable communities. Data privacy proposals, on the other hand, failed to clear the Legislature for the second year in a row. Those measures would have allowed Washingtonians to have more control over their data privacy, including the ability to ask companies to remove their data.

The Legislature also approved a bill that eliminated the special business and occupation tax rate for Boeing, to address concerns about avoiding a retaliatory tax tariff from the European Union. The measure comes after the lawmakers approved an $8.7 billion tax break for the company in 2013.

Additionally, legislators passed some measures to combat climate change. The state increased previous carbon-reducing goals based on the latest recommendations aimed at being carbon-neutral by 2050. The state passed legislation that would encourage Washington residents to buy zero-emission vehicles, and legislation to give incentives to community solar projects for people who are low-income.

Inslee said he was disappointed in the Legislature, however, for their decision not to adopt a clean fuel standard.

“That is very much an unfinished agenda and one that the people will expect to get done for the climate and for the health of our state in the next session,” Inslee told reporters during a press conference following adjournment.

He also stressed his disappointment in lawmakers’ inability to pass any new measures against high-capacity assault weapons.

Regarding health care, the Legislature agreed on two bills that attempted to lower the cost of medications for Washingtonians. House Bill 2662 establishes an insulin work group and also caps the cost of insulin at $100 a month for patients. Similar proposals were introduced in the Senate as well.

Lawmakers were also faced with challenges regarding transportation funding this year because of fallout from Tim Eyman’s initiative on $30 car tabs that passed in November.

The transportation budget that was approved Wednesday will allocate more than $10 billion to state transportation projects, such as road improvements and grants for people with disabilities. Legislators were able to avoid any significant budget cuts this year as a result of Initiative 976, but noted that next year they may face more ramifications when trying to pay for future projects.

The adoption of the transportation budget came one day before I-976 made further progress in a King County court.

This year’s session ended on time, 60 days after beginning on Jan. 13. Lawmakers will convene again in January 2021.

Here’s what happened to the other bills Crosscut followed this legislative session:

Senate Bill 6442: Bans private detention facilities in Washington state. The bill passed after a number of amendments were added that changed the initial intent.

Senate Bill 6147: Would have required homeowners living near bodies of water to consider fish-friendly solutions when building walls around their property. The bill failed to pass.

House Bill 2453: Would have required landlords to provide just cause for evicting tenants, but failed to pass out of committee.

House Bill 2277: Limits the use of youth solitary confinement. It passed with bipartisan support in both the House and Senate.

Senate Bill 5339: Would have removed the death penalty from state statute. It stalled in the House.

House Bill 2656: Would have banned plastic on food-service products. The bill did not pass.

Senate Bill 6625: Would have created a two-year pilot program to test universal basic income in the state. The bill did not pass.

House Bill 2575: Reforms accountability and transparency regarding gerrymandering. The bill did not pass.

Senate Bill 6536: Would have banned single-family-only zoning. It did not pass.

House Bill 2870: Reallocates marijuana retail licenses that have been revoked, forfeited or are otherwise going unused. The bill passed.

House Bill 2740: Would have prevented employers from turning down applicants who use marijuana. The bill did not pass.

Senate Bill 6522: Would have prevented immigration officers from making arrests within one mile of courthouses. The bill did not pass.

House Bill 2658: Would have allowed cities and counties to increase tax rates in order to fund homelessness. The bill did not pass.

House Bill 2839: Would have directed the state Gambling Commission to examine whether in-game transactions “induce compulsive purchasing behavior.” The bill did not pass.

Senate Bill 6494: Would have regulated sales of water rights to water banks, particularly those that exist to turn a profit. The bill did not pass.

House Bill 2907: Would have allowed counties with populations over 2 million to impose an excise tax on business. The bill did not pass.

House Bill 2220: Would have allowed parents with past criminal convictions to be able to volunteer at their children’s schools more easily. The bill did not pass.

Senate Bill 6228: Would have made it easier for those with felony convictions to vote. The bill did not pass.

House Bill 2793: Makes it easier for those with past criminal convictions to clear their records. The bill passed.